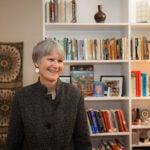 Trump administration’s arrival could lead to a fresh relationship with Moscow, analysts say

If Harvard hosted a panel in 1991 on U.S.-Soviet relations, it’s a good bet that the term “bromance” didn’t come up. But Scottish historian Niall Ferguson used that phrase Wednesday night, referring to the cozy relationship between Russia’s president and the U.S. president-elect, thereby showing just how drastically things have changed since the collapse of the Soviet Union and the rise of a new Russia.

Moderated by Graham Allison, director of the Belfer Center for Science and International Affairs and Douglas Dillon Professor of Government at Harvard Kennedy School, the panel, called “25 Years After the Collapse of the Soviet Union: What Comes Next?,” drew a standing-room crowd to the Starr Auditorium.

Allison began by screening the well-known video of the red flag coming down over the Kremlin, and then posed questions to the panelists. What went right and what went wrong in the wake of the Soviet collapse? And if we apply this history, what should happen moving forward?

Ferguson, who serves on the directorial board of the Belfer Center, didn’t believe that the cozy Trump-Putin relationship is necessarily beneficial. “I don’t think that the Trump administration should effectively be pandering to the Kremlin,” he said. Noting Trump’s desire to work bilaterally with Russia, he said that leader Vladimir Putin’s “main problem would be to stop himself from visibly salivating at the prospect.”

In Ferguson’s view, British leader Margaret Thatcher and U.S. President Ronald Reagan were correct in viewing the Soviet Union as an evil empire. He said that Moscow leaders Mikhail Gorbachev and Boris Yeltsin and U.S. President George H.W. Bush all deserve credit for maintaining peace after the Soviet collapse.

“Many people strongly believe that Putin is the villain. But there is another view, which is the one held in the Kremlin, that the deterioration of relations is in some ways the fault of the U.S.” He cited the more aggressive stance of recent Presidents George W. Bush and Barack Obama, saying, “It was the U.S. who proposed to put antiballistic missiles between the Czech Republic and Poland, and encouraged Ukraine to become a member of NATO or the E.U. Foreign policy expert Henry Kissinger thought that was a mistake, and I’m of the view that he was right. But I don’t think the Trump administration should respond by swinging to the opposite extreme.”

Mary Elise Sarotte, a visiting professor of government and history at Harvard, suggested that the answers to Allison’s questions were contained in three words: contingency, continuity, and collapse. In the first case, she said, sheer chance played a role in the fortunate turns after 1991.

“It was a biological contingency that brought Gorbachev to power, as the first three choices all died. He seized the opportunity to introduce some badly needed reforms,” she recalled. “But we also owe a debt to the protesters from below, who forced the window open.”

Continuity was what went wrong, as the West didn’t adapt to the new reality quickly enough. She cited the 9/11 terror attacks on the United States as a sad example, when American defense systems were still geared to a Soviet land attack. Finally, she named collapse as the word for the future, because the disintegration of the Soviet Union is ongoing. “Empires don’t collapse that quickly. And if the Soviet Union is still disintegrating before our eyes, policymakers need to understand the history.”

“During the ’70s, very few people would have thought that the West would overtake the Soviet Union economically,” Westad said. “But the transformation that started in the late ’70s put enormous pressure on the Soviet Union to come to terms with capitalism, the fact that it seemed to be elementarily successful. There was a realization, which Gorbachev came to symbolize, that the Soviet Union could not go on as it had in the past.”

Also advantageous, he said, was the ability of Reagan and George H.W. Bush to work with U.S. allies. “How difficult would the unification of Germany have been if there hadn’t been a Western alliance that actually worked?” he asked. The West’s main failure, he said, was in not building international structures where Russia could be better integrated. Allison echoed the thought that Russia has yet to be integrated into a greater international order.

The upcoming Trump presidency was again invoked at the end of the talk, with Ferguson raising the issue of how Russian hackers probably played a significant role in the U.S. election. Allison concluded that he’d bet that within two years of the Trump presidency, U.S.-Russian relations will have notably improved. But then, he said, the “thing about bets is that you can be wrong.”