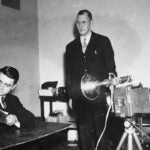 In a television studio, two news commentators ask sharp questions about Islam of an author of books on religion, while along the bottom of the screen a banner reads “Does Islam Promote Violence?”

The interview is painful to watch, said Diane Moore, senior lecturer on religious studies and senior fellow at the Center for the Study of Word Religions at Harvard Divinity School. For nine minutes, the commentators oversimplify and generalize about Islam as a religion that promotes violence, and paint all Muslims with a single, red-tinged brush.

It’s the kind of naive journalism that Moore would like to change. Through the Religious Literacy and the Professions Initiative, she hopes to enhance understanding of religions to undercut bigotry and prejudice. To that end, a symposium on religious literacy in journalism will be held this Thursday and Friday.

In advance of that, the Gazette talked with Moore about how higher education can work with journalists and other professionals to encourage more realistic and sophisticated coverage of religion.

MOORE: We can say it’s the media’s fault that we have such a one-sided understanding of Islam or other religions, but I don’t think it’s the media’s fault. The media ends up reproducing assumptions about religions that are embedded in our culture that are problematic, and they do it often unwittingly. And we have to recognize that journalists have a challenging role. They have to report on news, and news itself often is very focused and tends to be related to some kind of violent conflict. So to the extent that religious representatives are involved in a violent conflict or religious communities are targets of that conflict, it’s difficult for journalists to bring in the incredible nuance that is required to represent religion in a more complex way.

So the combination that journalists rarely have exposure to more sophisticated understandings of religion and the challenges in the profession makes them easy targets for our frustration and disdain. But I also think that they’re possible allies in helping us represent religion in a more nuanced way. And many journalists already do this very well.

MOORE: Christianity has a long history of incredible violence. Take the Crusades, the Inquisition, and contemporary representations of communities that go to extensive lengths to challenge the legitimacy of reproductive rights, for example. What people call “fringe groups” have, in other times and places, been central. It’s how we think about religion, unfortunately, that we give credibility to these universal claims about religions being violent or peaceful, either all good or all bad. The assumption that Islam is a violent religion actually began well before 9/11 and has a history of post-colonial and nationalistic tensions, where Christianity and Islam have often been at odds.

As much as we have a widespread association of Islam with violence, we also have a widespread association of Buddhism with peace and nonviolence. People would think of Buddhism as the Dalai Lama. Very few people know of Buddhist nationalists in Myanmar who are slaughtering Rohingya Muslims, an ethnic minority not recognized as legitimate citizens. Again, no religion is violent or peaceful. They all have representations, historically and in contemporary manifestations, of the full range of human agency, from heinous crimes against humanity to incredibly remarkable gifts of compassion, hope, and vision for a just world.

GAZETTE: What are the most common mistakes journalists make when covering religion?

We see that the fundamental misrepresentation of religion, what I call religious illiteracy, is what’s driving part of the fabric of U.S. culture. Rather than blame professionals for not having a more nuanced understanding of religion, it’s critical for us, as scholars, to reach out and create opportunities to exchange information and build partnerships.

GAZETTE: What might be the recommendations for journalists to become religiously literate?

MOORE: There are four fundamental assumptions that are often unknown or unrecognized by many people. First, we often say that a particular representation or a representative of a religious tradition somehow speaks uniformly and universally about that religion, which is not true. We often conflate a religious belief with the universalization of that belief.

GAZETTE: Explain a bit what you mean?

MOORE: This happens often in schools and journalism. If you want to get the perspective of Islam, you might be inclined to call the local imam or someone who is a Muslim because you think they’re the experts of that tradition. That’s a legitimate enterprise, but it won’t give you recognition of the diversity of the religion because any religious leader or practitioner is trained in a particular understanding of the tradition. This is especially obvious when you look at the diversity of Christianity in the U.S. If you want to learn about Christianity, who are you going to call? The local Roman Catholic priest? The leader of the Quaker meetinghouse? The local Methodist clergyperson? Or the local Mormon temple? And of course, whomever you call, you’re going to get the different experiences of Christianity. What we often do is conflate a particular representation of the tradition with the tradition as a whole.

GAZETTE: What about the other three assumptions?

MOORE: The second is that religions are internally diverse by definition. Religion is an evolving, living entity that is interpreted through the lens of experience, and within a singular congregation there will be diverse perspectives.

And lastly, religion is embedded in all dimensions of human experience and is not isolated in a so-called public domain of ritual practice and belief. Religion permeates all dimensions of human experience in multiple ways, and to pretend that it somehow can live in a discreet sphere is intellectually untrue. We constantly hear “That’s political Islam, it’s not religious Islam,” or “That’s political Buddhism, not religious Buddhism.” What does it mean? That religion doesn’t affect political life? Or that politics doesn’t affect religion? You can’t separate them. That’s an arbitrary distinction that doesn’t have a basis in reality.

GAZETTE: Why is religion still a big story in today’s world?

MOORE: The theory was that religion was going to fade into oblivion following primarily the end of the Cold War, but in fact, religions have always been embedded in all parts of human experience, and, of course, religion didn’t go away. All journalists, those who cover religion as a beat and even those who don’t, need to understand the roles religions are playing in diverse places all around the world. Religion is an important story, and it always has been. Our conception of religion as this isolated sphere has been a misrepresentation of religion that has been prominent since, frankly, the 17th century. But in fact, religions have always been informed in part by all political and economic realities of their time. You can’t separate religion in a private sphere. In the last 15 years, international relations scholars have recognized the importance of religion. The new formation of the Office of Religions and Global Affairs, part of the State Department, is a recognition that the state needs more complex understandings of religion and that we require an office to help translate those complex ideas to our ambassadors and other Foreign Service Officers.

GAZETTE: What are the risks of religious illiteracy for the profession and also for the general public?

MOORE: The consequences are profound. My own work is focused on the public understanding of religion. And journalism is a critical frontline in helping to advance better understanding of religion. Scholars have a lot to learn from journalism in relation to how to translate complicated ideas to a general audience, and journalists can learn from scholars how to have a more nuanced view of religion because we both want the general public to have a better and more responsible engagement of the complex role religions plays in human affairs. We can’t do that work alone. With more religious literacy, people can refrain from making those kinds of blanket assertions about any group of religious people. And I hope that people who are listening to these simplistic ways in which religions are spoken about will know better than to accept those representations and will start to recognize that as problematic.