ClassACT casts a mold for leadership 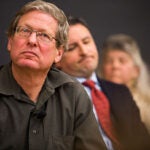 Benazir Bhutto’s classmates establish a program in her name

To many of her classmates and others around the world, Benazir Bhutto ’73 epitomized strength, determination, and grace under pressure. As the first female prime minister of a Muslim country, she espoused values — democracy, equality for women, education for all regardless of gender or religion, human rights — that today are in sore need of promotion all over the world.

That is why her college friends are starting an international leadership course in her name.

The Benazir Bhutto Leadership Program (BBLP) will take leaders from across the Muslim world and offer them both training and the chance to connect with others who share her principles. The idea is to introduce these fellows to a wide network of advisers, influence holders, and Class of 1973 alumni who can help initiate progressive change once they return home.

“The goal is to prepare people who will be assuming leadership positions in these countries,” said Bhutto’s classmate Peter Galbraith ’73. “It’s one thing to be a political leader. It’s another to be effective in government.”

The leadership program is part of a larger service organization called ClassACT, which stands for Class Achieving Change Together. An initiative of Harvard-Radcliffe Class of 1973, ClassACT is a nonprofit “founded on the premise that it is not too late for us to change the world,” said Marion Dry ’73. It aims to reunite classmates to address local, national, and international problems. “We wanted to pool our abilities and our interests together in a way that would help us do good works together,” Dry said.

The Bhutto program’s first event, an assembly titled “Leading in the Muslim World: What would Benazir Do Today?,” will be Monday at 9 a.m. at the Weatherhead Center for International Affairs. Several members of the Class of ’73 are expected to speak, including Holly Weeks, an adjunct lecturer at the Kennedy School of Government; Leigh Hafrey, a senior lecturer at the MIT Sloan School of Management; Kathleen Kennedy Townsend, former lieutenant governor of Maryland; and Bahman Mossavar-Rahmani, president of United American Securities, Inc. Farzana Yaqoob, a minister for social welfare and women’s development in Pakistan, is also expected to speak.

Empowering women is a key goal of the BBLP. “In the arc of Muslim majority countries from Lebanon to Bangladesh, women are barely represented in public service and in politics,” the Advisory Board and Steering Committee wrote. “It is probably not a coincidence that this part of the world is also an incubator for extremism and the locus of brutal suppression of individual freedom and horrific violence, often directed at women.”

Bhutto was 24 when her father, Pakistani Prime Minister Zulfikar Ali Bhutto, was overthrown by a military dictator. By 26, she was running her father’s People’s Party, but spent much of her time in jail as an opposition leader. At age 35, she ran for the prime minister’s office. Elected twice, she served from December 1988 to August 1990 and October 1993 until November 1996.

The first fellows are slated to arrive at Harvard in the fall of 2018. The BBPL will also have an associate program that allows scholars already at Harvard to participate in certain aspects of the curriculum. (The program will additionally support regular meetings in Cambridge to build personal relationships, hold group meetings with 1973 graduates, connect participants with mentors, and provide opportunities to attend conferences and events outside of Boston.) The size, scope, and even location of the program is still being worked out, but the hope is to shape current-day policymakers from Muslim countries in the progressive mold of Bhutto, who was assassinated in 2007 while campaigning for a third term as prime minister.

“This is a woman who put her life in danger knowing full well what the risks were,” said Mossavar-Rahmani, who serves on the board of ClassACT. “The symbolism of this — the example she set for both women and men — is extremely important. Her courage in the face of extremism in service to her nation is something that’s worth celebrating and spreading.”

The event was convened by Jacqueline Bhabha, professor of the practice of health and human rights at the Harvard T.H. Chan School of Public Health, Smith Lecturer at Harvard Law School, and director of research at the FXB Center for Health and Human Rights at Harvard.

For more information about Monday’s event, including the event program, visit the website.