Ten Harvard students and alumni have been selected to attend Tsinghua University in Beijing as Schwarzman Scholars.

The one-year master’s degree program is designed to assist future leaders who are now pursuing public policy, economics and business, or international studies and wish to tackle the many challenges facing China’s rapidly changing political, economic, and social landscape and ultimately build greater understanding and closer relationships between 21st-century China and the world.

Kayla Chen, 22, received an A.B. in government in 2016. While at Harvard, she served in many leadership roles with the Phillips Brooks House Association (PBHA) and was a senior staffer for Harvard Model Congress. Chen also enjoyed participating in the Modern Company and Harvard Dance Project, taking circus classes, and singing. Following graduation, Chen served as a Fulbright teaching assistant in Yilan, Taiwan. She plans to enter public service to link resources and conversations between East and West on human rights, international law, and civil society to combat global issues of inequality.

Janet Eom, 25, received an A.B. in social studies in 2014. She is currently the research manager at the China-Africa Research Initiative at Johns Hopkins University’s School of Advanced International Studies. Following graduation, she worked as a social development consultant at the World Bank before moving to Beijing to study Mandarin at Peking University and research China’s social and environmental impact in Africa at the Carnegie-Tsinghua Center for Global Policy. At Harvard, Eom was chief of the copy board of the Harvard International Review. Her own writing has been published in Foreign Policy, Forbes, and The Diplomat. She aspires to strengthen relations between the United States, China, and African countries to create new opportunities for economic development.

Anatol Klass, 21, is a senior living in Mather House pursuing a joint concentration in history and East Asian studies. He has conducted research in archives from Cambridge to Shanghai to Beijing to Taipei, publishing several papers and presenting original research at graduate school conferences. At Harvard, he is an active member of the ultimate Frisbee team and the First-Year Outdoor Program.

Quynh-Nhu Le, 22, is a Harvard College senior from Vietnam and the United States who studies gender and development as a social studies concentrator. She has been involved in several campus organizations, including as director of BRYE Extension, a PBHA after-school program for immigrant children, a staff writer for The Crimson on gender and sexuality, and president of the Harvard Vietnamese Association. Passionate about social justice and social impact, Le previously interned at the Fulbright Economics Teaching Program in Vietnam and founded a nonprofit summer camp there. She intends to pursue a career in academia studying social change in the Asia-Pacific.

Tonatiuh Liévano, 25, graduated with an S.B. in engineering sciences and a secondary concentration in economics in 2014. During his time in College, Liévano conducted research on tissue engineering and biomedical devices at SEAS, worked with the Colombian government on policy, was vice president of Engineers without Borders, represented Adams House on the Undergraduate Council, and studied economics and business in Portugal. Following graduation, Liévano worked with Partners In Health and the Lancet Commission on Global Surgery and spent a year in Brazil and Mozambique as a Michael C. Rockefeller Memorial Fellow. As a Schwarzman Scholar, he hopes to develop perspectives that will help him become an effective contributor to the public good in a rapidly globalizing world. 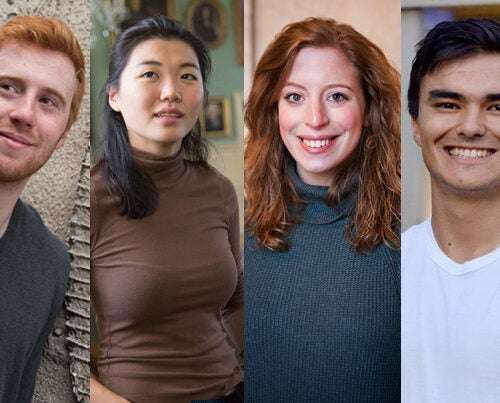 Sophia Lugo, 22, a senior at Lowell House, is studying history and science with a secondary concentration in global health and health policy. At Harvard, she has served in several leadership roles, including president of HACIA Democracy, vice president of the Harvard Organization for Latin America, and chief of strategy and social impact for the International Relations Council. Lugo is interested in exploring how business and politics interact with the production of knowledge in China. She will be joining the Boston Consulting Group after her Schwarzman fellowship.

A senior living in Dunster House, Rhea Malik, 21, studies regenerative biology and education policy. She has established a system of virtual classrooms in rural India and directs Harvard College Alzheimer’s Buddies, which led her to help develop a national nonprofit for Alzheimer’s care. She has also served on the executive board of the Harvard Political Opinion Project and has worked at the U.S. Department of Education, the National Institutes of Health, and the Greek Institute of Preventive Medicine. An aspiring physician-economist, she works at Harvard’s Stem Cell Institute developing cellular models for schizophrenia research.

A 2012 graduate of Harvard College with an A.B. in government, Jonathan Padilla, 27, is currently pursuing a master’s degree in public policy at the University of Oxford’s Blavatnik School of Government, to which he received a full scholarship as a Start-Up Nation Fellow. Prior to his time at Oxford, Padilla worked in local, state, and national politics, including in the White House and for former California controller Steve Westly. Outside of work, he is passionate about his involvement with the Hispanic Heritage Foundation and its mission to train the next generation of Latino leaders. He hopes to pursue elected office in the not-so-distant future.

Senior Bo Seo, 22, from Sydney, lives in Pforzheimer House and concentrates in social studies with a secondary concentration in English. His research in political theory focuses on human rights, identity politics, and the status of migrants. A winner of both the World Universities and World Schools debating championships, Seo is currently the coach of the Australian national debating team and has also held many positions with the Australian Human Rights Commission. Elected to Phi Beta Kappa as a junior, Seo is editing an anthology of diasporic writings on North Korea and has a black belt in Tae Kwon Do. He hopes to pursue a career in Australian politics.

Bob Wu, 23, is a 2015 College graduate who studied economics and lived in Winthrop House. As a student, he was a Class Marshal and the director general of the World Model United Nations conference. Following graduation, he worked for the Australian government and was a founding member of the Behavioural Economics Team of Australia. He aspires to apply the insights from behavioral economics to global economic policy. Wu grew up in Sydney.