Woe to the losers 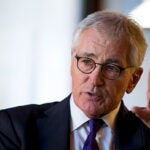 Advice for the next president

Partisans on the wrong side of Tuesday’s election might find themselves booking a quick vacation or desperately seeking a new show to binge-watch. Anything to ease the misery of losing.

Because while a post-election letdown should be anticipated, especially for the losers, the depth of that sadness, as outlined in past research, often comes as a surprise.

The result was documented in a study co-authored by Associate Professor Todd Rogers of the Harvard Kennedy School. His report found that winning elections only slightly improves the happiness of those affiliated with the winning political party, while those on the losing side experience dramatic levels of sadness for as long as a week.

“Winning an election is fine, but losing one is painful, at least in the short run,” the authors wrote.

Rogers, along with co-authors Lamar Pierce of Washington University in St. Louis and Jason Snyder of UCLA, analyzed thousands of daily online survey responses to compare the happiness and sadness reported by those who identified closely with political parties in the days surrounding the 2012 presidential election. Losers needed about a week to shake off their sadness.

The asymmetry observed between winning and losing was in line with prior research on happiness — bad things tend to hurt more and last longer than comparable good things.

To capture the felt intensity of election losses, the researchers compared the effect to that of two national tragedies. Using the same methodology, they found that respondents with children were distinctly less happy and sadder following the Newtown, Conn., school shooting, but that increase in sadness and decrease in happiness was half that felt by partisans on the losing side of an election. Similarly smaller effects were found for those living in Boston during the marathon bombing.

“We find that partisan identity is even more central to the self than past research might have suggested,” the authors said. “In addition to affecting thinking, preferences, and behavior, it also has sizable hedonic consequences, especially when people experience partisan losses.”