Trump and the law 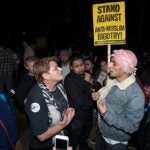 Discussion ponders how legal issues will play out in new administration

As President-elect Donald Trump prepares to take office in January, the legal community has begun to ponder and prepare for the changes the incoming administration may make.

During a panel discussion Tuesday, analysts at Harvard Law School (HLS) discussed the scope and limits of a president’s executive and judicial powers, the role the courts may play, and the ways in which Trump could reshape the authority and operation of an array of government agencies.

One involves what he called “bipartisan retrenchment.” Liberals and conservatives in the Supreme Court could form a new coalition, deciding for different reasons that administrative law during the Obama era has been too favorable to presidential power. Vermeule advised students to watch how two moderate conservatives, Chief Justice John Roberts and Justice Anthony Kennedy, react going forward. Both have previously expressed some anxiety over the administrative state, though not as vociferously as have more conservative justices Clarence Thomas and Samuel Alito.

In a climate of uncertainty for the incoming administration, “If we see the conservative centrists starting to take on board some of the stronger skepticism from the justices on the rightward flank, and especially if we see them joined in coalition by liberal justices like [Stephen] Breyer, who are occasionally skeptical about deference, then we have the makings of a supermajority coalition to rein in administrative power,” he said.

While such a coalition is unlikely to take drastic steps, Vermeule added, it’s possible that meaningful constraints could be implemented, such as giving deference to government agencies when interpreting their own rules; loosening rules that would allow for more court cases challenging administrative action; and taking a more permissive approach to complaints about agency inaction if the Trump administration “slow walks” mandatory regulations. There may also be less tolerance for political rationales offered by the Trump White House than those given by expert civil servants within agencies, as well as a tightening up of interpretive parameters so that more statutes are deemed “clear.”

Outside the courts, Democrats and congressional Republicans opposed to some Trump initiatives could consider pending legislation or take new action to rein in his administration, though Vermeule thinks such a move would be unlikely to succeed.

The second and “more likely” scenario, Vermeule said, involves what he calls ‘the Merchant-Ivory ballroom scene,” where dancers on opposite sides of a ballroom in period movie dramas at some point end up switching sides. Liberal lawyers who favored Obama’s expanded use of executive powers are likely to become critical of Trump, while conservative lawyers who railed against presidential overreach may now make peace with the president’s powers.

“The dance goes on as before, the structure of the dance is unchanged, it’s just that everybody is facing in the opposite direction,” he said.

If establishment conservative Beltway lawyers “come home to Trump,” that will be a key indicator that his administrative power will not be reined in. Such lawyers hold a strategic advantage over Trump’s camp because they have the legal know-how, the ability to staff administrative positions and, most importantly, credibility, which is important for getting political appointees through Congress.

“My guess is that the establishment conservative lawyers will come home to Trump” because they will be motivated by a widespread belief that working with the administration will be a virtuous way to “refine and moderate” possible future conduct — as well as by self-interest. After eight years out of power, there’s considerable pent-up desire among them to participate in government, Vermeule said.

“I think we’ll see a confusing transitional period” where people will talk about dramatic changes being made, but “in the long run, partisanship, rational self-interest, and institutional pressures that created a deferential body of law in the first place will reassert themselves.” Not much will change, and “the dance will go on.”

Four major signposts during the first 100 days will show whether the Trump administration will transform executive authority or not, said Cass Sunstein, the Robert Walmsley University Professor at Harvard.

First, how does the Trump administration handle ostensibly independent regulatory commissions such as the Security and Exchange Commission or the Federal Reserve? Trump, who has called for loosening of financial regulations, could try to exert authority over such entities. “That would be an extremely bold exercise of presidential authority,” one that would create logistical and legal problems and could even present some difficulties if agencies refused to comply with his directives, said Sunstein, who served as administrator of the White House Office of Information and Regulatory Affairs from 2009 to 2012.

Examining the steps that Trump takes in his first 45-60 days to review the nearly 2,000 regulations that Obama instituted as president will also be instructive. While most shifts are “not likely to raise partisan hackles,” there are some that already have moved or could move into Trump’s line of fire, such as rules on food safety, fuel economy, and energy efficiency. “Is there going to be a wholesale effort to undo the not terribly partisan, but for some Republicans, concerning aspects of the Obama regulatory legacy?” he said. “We’ll know very quickly.”

Also, will Trump make good on campaign promises to take a wholesale look at existing regulations and demand agencies toss those guidelines that don’t make sense to him, something the Obama administration was quite aggressive in doing? While tempting politically, there could be difficulties making that strategy work with civil servants who have substantial technical expertise, past experience with such clean-ups, and their own ideas about what should be done, and how.

Lastly, Trump’s pledge this week to eliminate two regulations for every new one enacted “would be a very, very big deal” if it happened. Logistically, it will be extremely hard to do, as there are many obstacles the administration would have to consider, such as whether to except rules abiding by court mandate and determining how their appropriateness should be measured when choosing regulations to toss.

With the executive branch’s role leading the trends in America’s criminal justice system and criminal justice reform, the effect that Trump’s presidency will have in this realm, given that his positions on a number of issues are either unformed or shifting, is still unknown, said criminal law professor Andrew Crespo.

There had been some consensus between Democrats and Republicans in Congress over criminal justice reform just a few months ago, but Trump’s push of a “law-and-order” message during his campaign may derail those legislative efforts, he said.

Also on the table are federal law-enforcement positions on prosecuting and on serving as a strong voice on policy issues, such as national security, solitary confinement, the use of private prisons, bail reform, indigent defense funding, drug enforcement, and drug legalization, a matter Attorney General nominee Sen. Jeff Sessions has publicly opposed. The Department of Justice’s (DOJ) work under Obama in overseeing police conduct cases and investigating and issuing consent decrees to police departments across the country may also be put on a back burner.

With concern rising about Trump’s possible continuation of private business activities while holding public office, the DOJ’s public corruption and public integrity prosecutions will also be important to watch.

“I think this is an area where concerns about the line between politics and law enforcement and politics and prosecution is often the one that needs to be most carefully guarded, when you are prosecuting politicians for potential wrongdoing, and is, as a result, an area that is open to abuse,” said Crespo. “We’ll have to see how the norms that have built up in past administrations carry forward.”