Larry Wilmore on the election 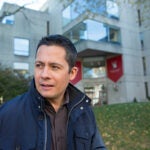 In the end, comedian says, Americans elected the president they wanted

So when did Larry Wilmore know Donald Trump could win the presidency? The moment came during the first Republican debate, the Emmy-winning writer, comedian, and producer said.

It was “when Megyn Kelly confronts him about what he said about women, how he had degraded women and called them disgusting and a pig,” recalled Wilmore. “And he said, ‘No, no, no, only Rosie O’Donnell,’ and he got huge applause. I was like, ‘He’s going to be president.’”

Wilmore presented his thoughts, leavened with humor, as he delivered the Theodore H. White Lecture on Press and Politics on Tuesday night at the Shorenstein Center on Media, Politics and Public Policy at the Harvard Kennedy School.

The evening event also saw the presentation of the David Nyhan Prize for Political Journalism to Nancy Kaffer. A columnist and member of the editorial board of the Detroit Free Press, Kaffer has written extensively about that city’s mortgage problems and the Flint water crisis, among other issues.

After a moving introduction by Nicco Mele, director of the Shorenstein Center, Wilmore took the stage. Speaking softly, almost quizzically, the political satirist focused on “keeping it 100,” or 100 percent real, as he used to say during the tenure of “The Nightly Show with Larry Wilmore,” which ran on Comedy Central from January 2015 through August 2016. Given the timing, one week after the presidential election, Trump’s unexpected victory was the main focus of the talk, but Wilmore also addressed the roles of media and comedy, the legacy of President Obama, and his own show.

“I do find it ironic that we elect a reality show star as president, and you invite a fake journalist to give the Theodore H. White lecture on it,” Wilmore told the capacity room. “I appreciate the irony of that.”

After acknowledging that it had been an “interesting” week, he went on to explain that rather than give a formal talk, he would interview himself as if he were a guest on his show. “I want to know what I’m thinking about this,” he said. “Don’t you want to know?”

This involved some minor theatrics — Wilmore jumped from chair to chair as he alternated between interviewer and host — as he mixed jokes with perceptive, and pained, comments on the state of our nation.

Wilmore was at home on election night, he recalled, working on a piece for The New Yorker magazine. “About Hillary,” he said. “I assumed Hillary would win.” (The resulting article, “The Birther of a Nation,” runs in the Nov. 21 issue.)

The atmosphere among Democrats on election night, he explained, was a little smug. “It was almost like someone’s about to open their brand new shiny Galaxy Note 7 [smart phone]. They’re so happy. They know it’s the smartest phone out there, even if it borrowed some of its better ideas from one of the more progressive phones out there. But that’s OK. They plug it in, and the most that’s going through their minds at that point is, ‘When will this phone be charged so I can start using it?’ Not, ‘Am I even going to have a phone at the end of the night?’”

When Trump took Wisconsin, “that phone basically burst into flames,” he concluded, applauding himself, in the role of the interviewer, for the timely reference to failed technology.

Looking back, Wilmore expressed surprise at Trump’s rise. When the candidate insulted Sen. John McCain (R-Ariz.), Wilmer thought that Trump wouldn’t even be invited to the first GOP primary debate, but he was. Then, there was “the Mexican rapist thing,” as he called the speech decrying undocumented immigrants as criminals. (Although that, he noted, “may have gotten him invited to the debate — just kidding.”)

From misogynist comments to mocking a disabled reporter, “everything Donald Trump did should have disqualified him,” Wilmore said, in a theme he returned to repeatedly. After asking himself if the president-elect ran a racist campaign, he answered in the affirmative.

“For me, it started before he ran for office with the whole ‘birther’ campaign,” he said. Wilmore likened Trump’s ongoing insinuations about the president’s citizenship to the stereotyping of the hypersexual black male in the 1915 film “Birth of a Nation,” calling that the “official de-legitimization of the black man in America.”

With his campaign, Wilmore explained, Trump was attacking the historic nature of Obama’s presidency. “What Trump was doing was the same thing: making an argument to un-Americanize the first black president. There was energy behind that movement. That was the energy I felt when he was running for office.”

That energy, Wilmore suggested, was responsible for Trump’s win. When Wilmore fielded questions about the role of a bemused and perhaps lazy media, he was very clear. “The media did not elect Donald Trump,” he said, multiple times. Nor did he believe that people voting against Clinton gave Trump his victory. Instead, he credited “positive votes for Donald Trump.”

Looking forward, Wilmore wrestled with the issues of reconciliation and of hope.

“I understand people who are angry right now,” he said. “It was Donald Trump’s own words that did that. If you’re one of those people he said he wants to deport, you feel there’s a target on you. I understand the anger; I have no problem with letting feelings get out,” he said, likening the process to marriage counseling. “You’re running to be leader of the free world. Your words are important … They do have consequences. I don’t think it’s on the people who are upset to wish the president well.”

For himself, he split the difference, expressing dismay while seeking a path ahead.

“I want Trump’s policies to fail,” he said. “I want the United States to win. It’s up to him to … prove that he’ll do the right thing ’cause he’s the president.”