Centuries of honor and prestige 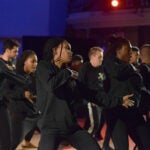 Dancing because they can

Enter Harvard Yard from the main subway entrance and you’re likely to see the bright yellow Wadsworth House, where Gen. George Washington set up his first Massachusetts headquarters in July 1775. Just a few hundred feet north, in Massachusetts and Hollis halls, more than 1,000 Revolutionary soldiers were quartered as they trained for confrontations with the British infantry. At the time, the University had been relocated to Concord, but the students and alumni of Harvard were no strangers to military conflict. From King William’s War to the French and Indian War, Harvard students and faculty had given their lives for the burgeoning nation they called home.

For almost 250 years, Harvard and the American military have worked side by side to build the United States into the global leader it is today, producing some of our greatest countrymen. From Theodore Roosevelt to E.E. Cummings to David Rockefeller, Harvard veterans were leaders and innovators who changed the world for the better as both soldiers and civilians. Radcliffe women proved their mettle as officers in the Navy Women’s Reserve, sustaining the country through World War II and laying the groundwork for future Harvard women to enlist in the University ROTCs. Today, Harvard is host to the full complement of ROTC branches, veteran student-scholars, and academic ties to diplomacy, defense, and technology.

To commemorate one of America’s oldest continued partnerships, the Harvard Library have curated “To Serve Better Thy Country,” an exhibit of the interwoven histories of the two storied institutions, assembling letters, photographs, and objects that show Harvard affiliates’ tradition of service from the earliest years of our country to today.

Opening on Veterans Day, the exhibit is designed for both history buffs and curious greenhorns, distilling four centuries of activity into a narrative that is engaging without being overwhelming.

“The story is not a straight line,” said Megan Sniffin-Marinoff, University archivist. “There are changes of relations with the military along the way, at times of both war and peace. The story does not necessarily break down neatly by time period or by the boundaries of an exhibition case. Figuring out how to break up that narrative to reflect what really happened is the great challenge in selecting items to put on display.”

“To Serve Better Thy Country: Four Centuries of Harvard and the Military” is on view in the Lammot du Pont Copeland Gallery in Pusey Library, Harvard Yard, weekdays 9-5 p.m.