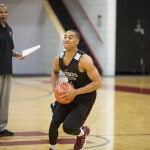 Siyani Chambers: Back on point

Alumni, faculty describe efforts both on and off campus

Across the country, recent conversations on issues of race, diversity, and inclusion have sought to address both recognition of past injustices and current disparities.

At Harvard, the work of scholars such as Sarah Lewis ’01, assistant professor of the history of art and architecture and of African and African American Studies, provides invaluable context to these discussions.

Through her course “Vision and Justice: The Art of Citizenship,” as well as an exhibit at the Harvard Art Museums and an issue of Aperture Magazine by the same title that she edited, Lewis uses seminal artwork and photographs of black people — from slavery to today — to “show the impact of art and visual culture in instances of social injustice.”

Lewis says that “our sense of citizenship and race are largely defined by visual literacy, a shared language developed by the histories attached to the pictures we circulate of each other to both reinforce and to break stereotypes,” and people must recognize how art has “functioned as a way to right the mismeasurement of human life.”

Harvard President Drew Faust, at this year’s Washington Ideas Forum, also noted that understanding history better “is an essential part of … how we build a future that creates students, faculty, human beings, citizens who have the self-consciousness about the possibilities of evil and injustice that we can learn through seeing how our ancestors made choices of the kind they did.”

At a recent Harvard Alumni Association event in New York City, co-sponsored by the Harvard Black Alumni Society, alumni and faculty turned their focus to the disparities in the art world beyond Harvard Yard and shared their experiences in breaking through a still-persistent color barrier while using their work to create social change.

Moderator Susan Fales-Hill ’84 quipped that some consider careers in the arts the “high road to international waitressing.” Fales-Hill, who among her many achievements was a writer for both “The Cosby Show” and “A Different World,” wondered how the digital revolution had lowered existing barriers to people of color entering the arts.

“The internet was my first business partner, my first manager, all of my agents combined,” Baratunde Thurston ’99 said.

Thurston, a comedian and writer who recently was the supervising producer of “The Daily Show with Trevor Noah,” now co-hosts the podcast “About Race” and is a correspondent for National Geographic Explorer. “The first art that I made that I could say really resonated was an email newsletter … That was practice, because instead of waiting for someone to find me, I made myself findable.”

In fact, it was a comical conversation with a friend on Twitter that led a book publisher to inquire about producing what would eventually become Thurston’s New York Times best-selling book, “How to Be Black.” He described his current work as an attempt to “shine a light” on racial issues in the United States, with the goal of advancing the discussion.

Adding Color to the Arts: Addressing Inequalities in the Cultural Sphere

In this HAA Alumni Education event, Susan Fales-Hill ’84 moderates and participates in a conversation addressing the cultural and racial inequalities in the arts, the intersection of art and activism, and how we are trying to move and overcome obstacles facing artists of color. Panelists include Professor Glenda Carpio, Baratunde Thurston ’99, and Candice Hoyes ’99.

Candice Hoyes ’99 said that when she began performing, she found herself cast in stereotypical roles for black, classically trained singers. She took an opportunity to research long-forgotten Duke Ellington songs, buried in the Library of Congress archives, that were originally written “to take black artists out of a category and let them excel.”

She compiled the works, recorded and self-produced with Grammy Award-winner Ulysses Owens Jr., into her critically-acclaimed debut album, “On a Turquoise Cloud.” Hoyes described self-producing as the ability to “make my music on my own terms.”

Hoyes, who completed a law degree at Columbia University before studying at Westminster Choir College, said, “I think sometimes the isolation of being the only black kid helped to drive my excellence, because it didn’t seem foreign to me to be in a room studying or working for stretches of hours.”

That hard work led to performances at Carnegie Hall, Lincoln Center, and beyond.

Glenda Carpio, a professor of English and of African and African American Studies at Harvard, noted that in the academy only 2 percent of those with tenure are women of color. That fact adds roles for her within the University. She wants students to “have the chops” and historical context to make art well and effectively, so that they can capitalize on their chosen medium.

She seeks to “provide templates for what has been done without the internet, so that they can understand how they fit into the tradition,” as she had in advising the student-created “I, Too, Am Harvard” campaign in 2013.

Carpio also considers it important to educate her colleagues about issues of race and the literary canon of African-American writing, whose stars are often overlooked or whose significance is misunderstood.

Still, “One of the hardest things to teach students at Harvard is how to fail, because they’re so used to success,” Carpio added. But for students of color in particular, she said, “My being there, just being there, showing up, is doing work” to personify what a person of color can achieve in academia.

Thurston and Hoyes agreed that the networks formed before, during, and after their time at Harvard have been instrumental to their success.

“Be on the lookout for all of the job openings, preferably before they’re open,” Thurston advised. “Think of it like an apartment [search] in New York. You don’t get that from the pages of a newspaper,” he joked, “because that is the level of sophistication and energy required to undo the passive discrimination that is the natural state of affairs” within the hiring networks of the art world.

To the recent graduate wondering how to deal with being the only person of color on a production team, Carpio advised, “Get power first, and then change the structure.”

Carpio was reminded of John Leguizamo’s Off-Broadway production, “Mambo Mouth,” where he distributed tickets to reach a more diverse audience than the usual theatergoers. “He had to get to Broadway, and then bring Brooklyn and Queens and the Bronx” into the theater.

“The audacity of our cultural capital is very radical, and that’s why you see these glass ceilings breaking in many directions,” Hoyes added.