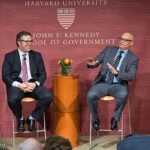 Larry Wilmore on the election

The election of Donald Trump as U.S. president could add to the turbulence Europe is already experiencing from its persistent debt crisis, the rise of nationalist political parties, and Britain’s decision to leave the European Union, analysts told a Harvard conference.

At the Minda de Gunzburg Center for European Studies’ annual Summit on the Future of Europe on Monday, speakers agreed there are no easy solutions to the upheavals that have buffeted the continent’s economy and raised concerns about the survival of its democratic traditions. The outcome of the U.S. elections adds to the uncertainty.

“These are desperate but not hopeless times,” said Charles Maier, the Leverett Saltonstall Professor of History at Harvard, alluding to Trump’s election and the overall rise of populism both in Europe and in the United States.

“Unfortunately, we are still in the midst of the most serious crisis in the history of European integration,” said Jeffry Frieden, professor of government, noting that the “European Union and the Eurozone in particular is still in the grips of a devastating debt crisis with extraordinarily sweeping economic and political implications.”

But while differing on the best approach, speakers said there are strategies that European leaders can follow to ease the crisis atmosphere.

The daylong event featured sessions on European democracy, the Eurozone crisis, security and foreign policy challenges, and the future of the European Union, along with a keynote address by European Commissioner Pierre Moscovici.

Pippa Norris, the Paul F. McGuire Lecturer in Comparative Politics at the Kennedy School of Government, said rising populism is leading to a shift from the traditional left-right political division to a “new cleavage” separating people with cosmopolitan, liberal attitudes from those who are anti-establishment.

Norris argued that the populist surge in Europe and the United States is driven primarily by a cultural backlash, observing that as progressive values have grown since the 1960s, “Many groups have been left off, and in particular the older generation rejects these values and feels that their values are now under threat.”

She added, “It’s a threat to democracy and democratic promotion around the world.”

Joseph H.H. Weiler, former president of the European University Institute, said there has been an ongoing democratic crisis, stemming from the fact that the growth of the EU’s powers and functions have far outpaced that of its democratic institutions. European citizens do not have the feeling, essential to a democracy, that they can influence government, he said.

“The big debate about austerity and growth doesn’t get processed through elections to the European Parliament,” he said.

Daniel Ziblatt, professor of government at Harvard, said there are warning signs that Europe is heading for a crisis in democracy. He cited the rise of far-right political parties, a trend he believes traditional center-right parties are best suited to manage.

“A well-organized constitutional right is able to contain the far right within its ranks,” he said.

Wolfgang Merkel, director of the Democracy and Democratization Research Unit at the Berlin Social Science Center and currently a fellow at the de Gunzburg center, cautioned against sweeping judgments on whether democracy is in crisis.

He said studies show, for instance, a significant decline in public trust in elective government, but high trust for institutions such as the military, police, and the judiciary.

Frieden said EU leaders have failed to take the steps needed to resolve the debt crisis.

Peter A. Hall, Harvard’s Krupp Foundation Professor of European Studies, warned that in addition to its debt, banking, and growth crises, Europe faces a political one, with declining levels of trust in government and a shift away from mainstream politics. Hall argued that EU leaders worsened or caused the problem by seeking a “fuller fiscal or political union” in response to the Eurozone crisis, an approach that he said deprives national electorates of the sense that their governments are accountable.

“The EU should be loosening rather than tightening its requirements on national governments,” he said.

But Hans-Helmut Kotz, visiting professor of economics at Harvard, said one of the EU’s problems is that it has failed to coordinate its fiscal and monetary policies. “The upshot is that monetary policy and fiscal policy intersecting in Europe do not suffice to create a macro environment that could nurture and support growth,” he said.

Christopher Smart, a senior fellow at the Kennedy School’s Mossavar-Rahmani Center for Business and Government, said that while populism and nationalism are no doubt on the rise, broader economic and technological trends are driving the world closer together.

He added that institutions, notably the European Central Bank, remain firmly in place to grapple with those forces.