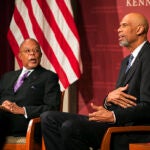 Abdul-Jabbar on what America needs

From the very beginning, the Patient Protection and Affordable Care Act (ACA), President Obama’s signature piece of legislation, has been beset with problems: bitter debate among lawmakers, a Supreme Court challenge, and crippling technical difficulties with sign-up site Healthcare.gov, to name a few.

More recently, insurers have been pulling out of the law’s insurance exchanges, and just last week the federal government announced that the cost of some health care plans would jump next year by 25 percent. Still, some 20 million more people have health insurance thanks to the ACA, and the new law prohibits insurers from denying coverage to people with pre-existing health conditions.

To assess the ACA landscape the Gazette spoke with Katherine Baicker, the C. Boyden Gray Professor of Health Economics at the Harvard T.H. Chan School of Public Health.

GAZETTE: Do you think the Affordable Care Act has worked? Has it achieved the goals that the president and Congress set out for it?

BAICKER: I think there were two goals, broadly speaking. The first was to get more people covered with affordable health insurance and the second was to slow the rate of health care spending growth.

I think a lot of progress has been made toward the first goal, if not covering everyone. The number of uninsured people has been reduced through expansion of Medicaid and subsidized health insurance plans through the health insurance exchanges. That in some ways is the easier goal, even though it’s expensive and is perhaps is more expensive than some people had hoped — we fundamentally know how to get people health insurance. You have to make affordable plans available, and you have to suitably encourage people to be enrolled in those plans.

The much harder goal is slowing the growth of health care spending. And really, the goal shouldn’t be to spend less on health care, the goal should be to get high value for what we are spending. We frequently talk about spending less, which is shorthand for having spending grow less quickly. And what we really mean is spending less for every unit of health we are getting. So the shorthand can sometimes be misleading about what the real goals are — improving value in the health care system. And that’s a much harder nut to crack. How do you discourage spending on care that’s of low value, while ensuring that there’s really good access to care that’s of high value, particularly for low-income populations? A number of strategies have been deployed, but they have had mixed success. It’s also much harder to know the effects of those levers — to assess what trends in health care spending can be attributed to the ACA versus not.

GAZETTE: What are the main drivers of medical costs and what if anything can be done to reduce the rate of growth?

BAICKER: First of all, the main driver of health insurance premiums is health care utilization. We use a lot more health care resources in the U.S. than some other countries do. We use a lot more resources in some parts of the country than we do in others. And all of that is evidence that we could be getting better value out of the system. There are pockets of the U.S. where people are getting really high-quality care at a lower cost with better outcomes. And those are models for parts of the country where we seem to be spending a lot more money and not achieving the health outcomes that we could. Part of it is the disconnect between the people who pay for health care and the people who make the decisions about the health care that’s used. And that can be about insurance and what it covers with what co-payment; it can be about providers’ decision-making; and it can be about patients not having the information they need to decide what care is really right for them.

GAZETTE: Data released by the federal government indicates some premiums will rise 25 percent in 2017. In addition, a number of insurers have pulled out of the program. What do those factors mean for the ACA moving forward?

BAICKER: It’s important to realize that the premium increases people are talking about are for a very specific subset of of health insurance policies: those sold on the health insurance exchanges, the non-group market. It’s not about the premiums people are paying for employer plans. It’s not about people who are covered by Medicare or Medicaid. It’s a pretty narrow slice of the population we are talking about. That doesn’t mean it’s not important — it’s just that sometimes people think that means everybody’s health care costs are going up by 25 percent and that’s just not what’s happening.

Most of the people who get health insurance through the exchanges are heavily subsidized, with premium and cost-sharing subsidies. So individuals’ costs are not going up as much as the total premiums are going up. That means it’s going to be more expensive for the federal government as the subsidies are going up commensurately with premium increases.

GAZETTE: So that cost falls to the taxpayers.

GAZETTE: So why are these premiums going up?

BAICKER: Some of it is about general rise in health care spending, but some of it is really specific to the way the health insurance exchanges were implemented and phased in. For example, because it was a new market, because insurers were entering an exchange that didn’t exist to cover a population that hadn’t been covered, there was a lot of uncertainty about how much it would really cost to deliver health insurance to that population. So the law had subsidies to protect insurers against unexpectedly high costs: reinsurance. As those subsidies phase out, premiums will necessarily go up because the cost of that insurance for very high-risk people is being transferred from the federal government to the insurance plans. Another part of it was that some insurers might have priced their premiums too low in the beginning, making guesses about who was going to be covered and how much those people were going to cost.

GAZETTE: What about the insurers who are pulling out of the program? Will that increase costs?

BAICKER: The goal of having privately provided insurance through an exchange is that insurers will compete for enrollees by offering higher-quality benefits at a more affordable premium. If you don’t have competition there’s very little advantage to having a marketplace. If insurers drop out to the point that there aren’t enough competitors, that could have real negative consequences in terms of the value of the plans that are being offered. And I think we did see that some of the withdrawals were relatively new insurers with relatively small books of business who came in with low premiums — thinking that they were going to be able to provide a really lean, competitive benefit — but discovered that their premiums were too low, and that they couldn’t continue to participate in the market. That pushes premiums up and competition down. And certainly too much consolidation on either the insurer side or the provider side undermines the competitive pressures that we would like to be driving higher value benefits and lower premiums. So that’s a real concern.

GAZETTE: Another critical issue is that too many young people are choosing to pay the penalty instead of signing up in the exchanges. What do you think the fix is there?

BAICKER: That’s definitely a related issue. Insurers price their policies based on their guess about who is going to enroll. If young healthy people don’t enroll, then it’s going to be more expensive per enrollee to cover the people who are left, and premiums are going to be higher.

What’s the fix? My suspicion is that it may not be clear to people what subsidies they are eligible for, what the advantages of being insured are, what policies are available to them at what net premium. Making sure people are aware of those benefits is necessary but may not be sufficient. Even people who are aware may not be signing up, and maybe the penalties are not high enough. It might be that the benefits of being insured are not clear enough. It’s difficult to perceive the advantages of being insured if you don’t end up using your health insurance benefits in a given year. The financial protection that insurance provides is a pretty abstract thing if you are not sick. That’s really hard for people who are young and healthy to internalize.

GAZETTE: Is the public perception of the effectiveness of the ACA a concern? A recent poll by Politico and the Harvard T.H. Chan School of Public Health found that a majority of voters say the law is failing. How will that affect efforts at reform?

BAICKER: There are clearly some misconceptions about what’s going on in health care markets. What policies are available and how much people have to pay for them is not very clear from the coverage that you read. Also, there are millions of people who are insured now who weren’t before. So when you asked whether the ACA is working, it depends on what your goals are. Is it working to increase health insurance coverage? Yes. Is it working to slow health care spending growth? Much less clear.

GAZETTE: What are some of the things that analysts agree could be improved?

BAICKER: Some states have expanded their Medicaid programs and some haven’t. There’s an opportunity for more flexible options in expanding coverage for low-income populations, whether it’s private versions of Medicaid coverage offered through things like exchanges, or other kinds of Medicaid waivers. There’s also an opportunity to improve continuity of coverage for low-income populations with variable income. Having people transition from Medicaid to subsidized exchange plans and back again creates discontinuities in coverage that are both expensive and potentially harmful for health. Those could be addressed. There are also gaps in coverage that I think were not intended by the original law, either because some states didn’t expand Medicaid or because of the specifics of drafting that may not have been intended — for example, defining the affordability of coverage based on a single policy versus a family policy. When you look at any large-scale, complicated new program — whether it’s Social Security or Medicare and Medicaid or the Affordable Care Act — there are inevitably lots and lots of things that need to be refined in the years that follow. There were lots of changes to the Medicare law after it was initially implemented. I think there are parallel changes needed in the Affordable Care Act that would make it work much better than it does now. And if there isn’t willingness to address some of the technical fixes, that’s really problematic for having it function well.