The fog of peace 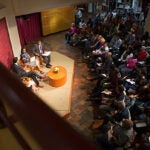 Voice of experience sheds light on Colombia’s ‘no’ vote

It was going to be the end of war. Now Colombians wonder whether peace is possible.

On Sept. 26, President Juan Manuel Santos and the rebel Revolutionary Armed Forces of Colombia, FARC for its acronym in Spanish, signed a historic peace agreement after four years of negotiations to end Latin America’s longest-running conflict. It was to bring closure to 52 years of a civil war that has claimed more than 200,000 casualties and displaced nearly 6 million people.

On Oct. 2, in a shocking result, Colombians rejected the deal in a referendum, 50 to 49 percent, with a 60 percent abstention rate. A few days later, the Nobel Committee awarded Santos the 2016 Nobel Peace Prize partly in hope of reviving talks.

To make sense of these developments and what they mean for the country’s future, the Gazette sat down with political anthropologist Jennifer Schirmer, visiting scholar at the Religions and the Practice of Peace Initiative at Harvard Divinity School (HDS). Schirmer spent 14 years working on peace negotiations in Colombia.

GAZETTE: Why was there such a huge abstention rate?

SCHIRMER: One of the factors was the hurricane that hit the coast on voting day, forcing thousands of people to stay home. Many others didn’t vote because they thought it was unnecessary. Polls were predicting the yes vote was going to win. As to why many Colombians voted no, there are various reasons. The yes campaign started late, and their supporters underestimated former President Álvaro Uribe, who led the no campaign. Uribe called the peace talks “a pact of impunity” that would lead to violent chaos. With the 297-page final accord released only a month before, many voters depended on social networks. Disinformation by Uribe’s tweets was difficult to correct in time. The more conservative elements of the Catholic Church and the evangelicals joined the no campaign. The most interesting aspect of the cartography of voting shows that those who suffered direct effects of the conflict in some of the poorest parts of the country with extreme concentrations of land were the most willing to vote yes. Overall, victims have been the most willing to forgive, to accept the FARC’s pardon, and to end the war.

GAZETTE: What were the most controversial aspects of the peace accord?

SCHIRMER: One element was disarmament. The FARC said they would not hand over their weapons to the armed forces but to a third party, United Nations monitoring teams. This was significant for the FARC because they didn’t want to be seen as capitulating. The other element was transitional justice. In a negotiation seeking to put an end to a war, alternative and reduced sanctions are permitted as long as they are combined with measures of truth, reparation, and no repetition of crimes. With the FARC unwilling to negotiate an accord “that means we end up in jail,” a system of truth and justice was agreed upon that places victims front and center. The accord creates a peace tribunal with two options: Those who refuse to accept responsibility for their crimes will be sent to jail for 15 to 20 years, and those who accept responsibility receive five to eight years of “effective restrictive freedom,” the place and conditions to be determined by the tribunal. These options apply equally to the FARC, armed forces, and civilians who have had significant participation in crimes.

GAZETTE: What about reparations to victims?

SCHIRMER: The accord included reparations to victims by building schools and work with affected communities on humanitarian de-mining, and they’re deemed critical. With a yes vote, the FARC would have been far more likely to disarm, tell the truth, be held accountable and provide reparations.

GAZETTE: Who are the FARC?

SCHIRMER: It’s a Marxist insurgent group that controls territory, has considerable funds and weapons and despite a severe bombing campaign by the Uribe and Santos governments between 2007 and 2012, has remained capable of continuing the war. Surrender was not an option and there was a need for concession and compromise on both sides. In this case, the FARC made the political decision to find a dignified exit to the war. Most peace processes are successful when this occurs.

GAZETTE: Why did they start the civil war? What were they fighting against?

SCHIRMER: Guerrilla groups arose primarily because of political exclusion and serious land inequity. Back in the 1940s, Colombia went through a terrible period of violence between the liberals and conservatives. A pact was agreed upon to alternate the presidency every four years, excluding all other parties. Political exclusion is a ferocious fault line of Colombian democracy, and it operated that way until 2004, with the rise of a left party. Between 1964 and today, eight guerrilla groups appeared on the scene fighting such political exclusion and seeking land redistribution.

GAZETTE: Why did the FARC decide to negotiate?

SCHIRMER: Social justice and land reform are still the central issues, but over the last decade, the FARC came to realize this was a conflict of the past that is barely justified today. What they say now is that there is a new way to seek change, but not through armed struggle. They saw other Latin American countries elect more progressive leaders, and realized revolutionary movements belong to the past. This change of mentality opened the door to negotiations.

GAZETTE: What role do you think the decision to award 2016 Nobel Peace Prize to President Santos will play in the peace process?

SCHIRMER: President Santos deserves great credit for pushing for peace, and for breaking this historical cycle of war. We can only hope Santos will show the same resolve in finalizing and implementing the peace that he did in negotiating it. I am optimistic they can find a way forward.

GAZETTE: What was your personal involvement in the peace negotiations in Colombia?

SCHIRMER: I organized and facilitated peace-building dialogues in Colombia for the past 14 years between different sectors from the political class to the economic elite, from the armed forces to former guerrillas, and from academics to journalists. For the past four years, I was asked to hold seminars for the technical subcommission in their design of a Colombian model of ceasefire and disarmament. What is extraordinary is that the traditional adversaries in this conflict — military officers and guerrillas who have taken the brunt of the combat with high casualty rates — have been, for the past year, jointly writing and delineating the coordinates of the cease-fire and disarmament protocols to end this long and bloody war, while right-wing politicians, led by two past presidents, serve as obstacles to peace.

GAZETTE: Did you find any parallels between the Colombian referendum and the one in Britain where people voted to leave the European Union?

SCHIRMER: The huge difference in Colombia is that this is a difference between peace and a return to war. Nonetheless, the comparison is useful as it forces us to ask whether a referendum is the solution for these sorts of very complex political decisions. Both [former British Prime Minister David] Cameron and Santos decided to hold a referendum for their own political reasons, and both were warned not to. Santos was re-elected in 2014 on a peace platform. His own attorney general told him it was not necessary constitutionally. Finally, it seems neither leader had a Plan B, which is quite extraordinary.

GAZETTE: What risks do this failed peace accord pose to Colombia?

SCHIRMER: It’s a gray zone between war and peace. No war. No peace. It’s a limbo, and my fear is that, if violence were to return, the internal cohesion of the FARC may falter. This is Latin America’s and one of the world’s longest-running conflicts, with one of the largest insurgent groups. A bilateral cease-fire has been agreed upon and extended until Oct. 31. But if there is a confrontation and a loss of security, would the FARC leadership be able to control its troops? That’s the biggest risk in these processes: how to maintain the trust on both sides and how to maintain cohesion internally.

The interview has been edited for clarity and length.