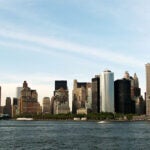 What is intersectionality? Think of it like the ingredients needed to make a cake, Brandeis University lecturer Laurie Nsiah-Jefferson said at a recent Faculty of Arts and Sciences Diversity Dialogue. Take the eggs, milk, flour, and other ingredients, blend them together and bake, and the final product is the cake.

In people, the ingredients are the characteristics they use to identify themselves — male, female, black, white, Muslim, Christian, Bostonian, etc. Like eggs, flour, milk, and sugar intersect to make a cake, those are some of the intersecting ingredients that might make up a person.

During her presentation, “Intersectionality: Definitions, Origins, Controversies, and Applications,” Nsiah-Jefferson explained that to better understand an individual and work effectively with him or her, we must understand all the identities that make up the person.

“Human lives cannot be explained by taking into account single categories, such as gender, race, and socio-economic status. People’s lives are multi-dimensional and complex,” she said.

When only some of the layers of a person’s identity are known, he or she can face bias. “People can experience privilege and oppression simultaneously,” Nsiah-Jefferson said. As an example, she compared Oprah Winfrey to a black man from Harlem. Winfrey, because of her fame and economic status, has privilege that the black man does not. However, she is still a black woman who can face discrimination. Nsiah-Jefferson cited the case of a shopkeeper in Europe who did not know Winfrey and questioned her ability to pay because of her race.

“People make assumptions. Privilege can only get you so far.”

Understanding intersectionality can promote “an understanding of human beings as shaped by the interaction of different social locations,” such as race, ethnicity, gender, and class, Nsiah-Jefferson said. “Utilizing intersectionality frameworks can help us more accurately reflect the diversity within higher education in the classroom and in the workplace … promote greater understanding of how converging identities contribute to inequality [and] help us to avoid simultaneous advancement and perpetuation of inequities.

“Scholars, researchers, practitioners, policymakers, and activists must consider their own social position, role, and power when taking an intersectional approach,” she said. “Intersectionality is explicitly oriented toward transformation, building coalitions and different groups, and working toward social justice.”

In the workplace, Nsiah-Jefferson suggested that leaders should recognize the layers of the people they work with. “If you have not been able to reach certain subpopulations you want to serve, find key stakeholders from these subpopulation groups and interrogate potential barriers,” she said. “Don’t just assess success of desired outcomes on gender, religious groups, etc., but subpopulations within the larger groups.

“When we say intersectionality, we are saying one size does not fit all,” she concluded.

“Intersectionality is an important lens to use in decision-making and resource allocation,” said Reema Khan, director of finance and IT systems for FAS Physical Resources and Planning, who attended the dialogue. “When crafting policy or assigning limited resources — such as funding, space, access, titles, opportunity — intersectionality can inform the process to work toward equitable and inclusive results. Considering the layers of intersectionality ensures that all voices are heard and there is a conscious awareness of the trade-offs being made — and their implications.”

Intersectionality was the first of three FAS Diversity Dialogues for the academic year. The next, “Muslim Feminism,” will be on Dec. 6. The Diversity Dialogues are free and open to the public, and are offered through the FAS Dean’s Office, FAS Human Resources, and the FAS Office of Diversity Relations and Communications.