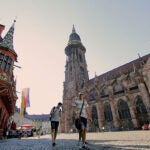 In Germany, learning while seeing

Pam Grier burst onto the scene as a star of “blaxploitation” movies in the early 1970s. While drawing criticism for promoting racial stereotypes, the films were praised by some viewers as empowering for their depiction of strong African-American characters. In the eyes of Henry Louis Gates Jr., the Alphonse Fletcher Jr. University Professor, Grier was “the most powerful and impressive image of a black woman to emerge out of the blaxploitation era.” Grier is among the recipients of this year’s W.E.B. Du Bois Medals, to be presented by the Hutchins Center at Sanders Theatre Thursday at 4 p.m., as well as the subject of a current Harvard Film Archive retrospective. Gates, set to interview Grier prior to HFA screenings at 7 p.m. Friday and Saturday, spoke to the Gazette about her indelible screen presence.

GAZETTE: To start, can you briefly define the blaxploitation genre?

GATES: Blaxploitation was the name given to the first real flourishing of films about the black experience produced by black directors and white directors. So the black in the title was the subject of the film rather than the subjectivity of the director. It was a period in the late ’60s and early ’70s. It was the cinematic version of the Black Arts movement and the Black Arts movement was a cultural aspect of the Black Power movement, and it coincided with the birth of black studies starting in 1968, 1969. Really the blaxploitation era started then as well, more or less, and then went through the early ’70s, when interest petered out.

It was the first renaissance of black films, when Hollywood seemed to be wide open to films about the black experience. But, as the name suggests, many of these films were quite sensational. Some of them, like “Blacula” — we are not talking about Fellini here. They were made for entertainment and often perpetuated unfortunate stereotypes about black people. But some were quite good. Melvin Van Peebles’ “Sweet Sweetback” is an example of a very powerful work of art among many others, and the works of Gordon Parks were superb.

GAZETTE: How did Pam Grier fit into this world?

GATES: Pam Grier became an icon of black female power, of black agency and black subjectivity. She always seemed in control of her part, in control of the characters that she was playing. No matter how they were scripted she took control of those images and became an important model of a thinking, proactive black woman. … She certainly is the most powerful and impressive image of a black woman to emerge out of the blaxploitation era.

GAZETTE: How do you feel she balanced the objectification of her characters with the empowerment that she brought to her roles?

GATES: I think that films in general at that time in the late ’60s and early ’70s represented women as objects and black people as objects in general. And what Pam Grier did, and Melvin Van Peebles in his way, was to turn that object relationship into a subject relationship. Pam Grier took control of her roles, no matter how they restricted, and I am not privy to the scripts, but if they were written by a male and meant to consciously or unconsciously objectify women, she took control of her performance and made it powerful, made it a statement about feminism and the tradition of black women being actors in history and being subjects in history and not merely objects. What I am trying to say is that she wrestled control often off of what would otherwise have been, in a lesser actor, an objectification, and made the part powerful, made it her own, made it something that we’re all proud of.

GAZETTE: How do you think this work resonates today?

GATES: I can’t answer that because I haven’t watched these films with a group of young people. For me, when I see these films, I think about being an undergraduate at Yale watching them with other black students with our Afros all in each other’s ways.

GAZETTE: Can you tell me a little more about what the experience of watching these films then was like for you?

GATES: I graduated in the class of ’73 at Yale. We flocked to these movies — finally, to see images of ourselves. Images of black people in film and on television were so rare. When I was growing up in the ’50s and ’60s if someone appeared on TV, whether it was a minor character in a feature film in the late, late show or a guest on the Johnny Carson show or a person on a quiz show, everybody in the neighborhood would call each other: “Colored person on television!” “Where?” “Channel 5!” And everybody would go watch it and hope that they won the quiz show or comported themselves with great dignity. And likewise in movies, you never saw black people in movies. The old race films from the ’20s and ’30s made by people like Oscar Micheaux and Spencer Williams weren’t available or certainly weren’t readily available unless you had access to an archive like the Schomburg library in Harlem or the James Weldon Johnson Collection at Yale.

Now you can get all of it online and YouTube and in box sets, but not then. All of a sudden there’s the Black Power movement, which starts in ’66, and then the Black Arts movement starts about the same time, and then the blaxploitation era, which included dozens and dozens of films, some of them generated by black people, which were really quite noble and powerful, and others like “Blacula” which seem laughably ridiculous.

And we went to see them all. And we laughed. We were never confused about the difference between art and camp, between art and schlock. We thought “Blacula” was funny, but “Sweet Sweetback” we thought was the image of a powerful black man and a black man experiencing his subjectivity. And all of Pam Grier’s movies were examples of her transcending however the role was scripted. Whatever was intended, and we have no way of knowing that, the effect was riveting.

GAZETTE: Do you remember what it felt like to see this powerful woman up on the screen, an African-American woman in an action figure role?

GATES: It was mind-blowing, to put it in the vernacular. To see a black female action figure, I’d never even imagined it. It’s a bit like seeing Shirley Chisholm run for president. Pam Grier was breaking the role, defying the stereotypes, registering a new realm of possibility. And everyone respected her. No one thought you were looking at a prostitute in “Foxy Brown.” We thought you were looking at a woman who was brilliantly planning revenge for the murder of her husband. These films weren’t anthropological studies of African-Americans; this was Hollywood. But within those confines she showed a great deal of control over the image that was projected and that’s what we admired then and that’s what we admire now. She became a hero to us, in addition to being a goddess of beauty.

GATES: “Foxy Brown,” without a doubt. It delights me to no end that Harvard University is honoring a pioneer of black cinema and a person who played a historical role in showing the range of possibilities for black female characters, strong black female characters, defying the maid and the mammy stereotypes. No one would confuse Foxy Brown with Mammy in “Gone With the Wind,” or “Julia,” with all due respect, who was a middle-class, very articulate nurse, but Foxy Brown had agency, big time.