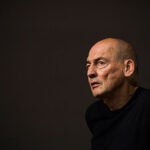 Historian Annette Gordon-Reed would like to make clear that she likes “Hamilton,” the Broadway hip-hop musical phenomenon about Alexander Hamilton, which audiences and critics have adored and some scholars and writers have scorned.

“A Broadway show is not a documentary,” said Gordon-Reed, a history professor in the Faculty of Arts and Sciences who also holds the Charles Warren Professorship of American Legal History at Harvard Law School and the Carol K. Pforzheimer Professorship at the Radcliffe Institute for Advanced Study.

And so she did.

The show portrays Hamilton as a “young, scrappy, and hungry” immigrant (he was born on the Caribbean Island of Nevis, but qualified as a U.S. citizen when the Constitution was adopted), an egalitarian, and a passionate abolitionist. All of this is wrong, Gordon-Reed said.

“In the sense of the Ellis Island immigrant narrative, he was not an immigrant,” she said. “He was not pro-immigrant, either.

“He was not an abolitionist,” she added. “He bought and sold slaves for his in-laws, and opposing slavery was never at the forefront of his agenda.

“He was not a champion of the little guy, like the show portrays,” she said. “He was elitist. He was in favor of having a president for life.”

The musical simplifies and sanitizes history, said Gordon-Reed. “The Hamilton on the stage is more palatable and attractive to modern audiences,” she said.

Set amid the Revolution, the play fails to depict the central role played by slavery at that moment in history, and also neglects to mention that most of the Founding Fathers were slave owners.

“In the musical, only Jefferson is shown as a slave holder,” said Gordon-Reed, who won a Pulitzer Prize in 2009 for her book on the family of Sally Hemings, slave and mistress to Jefferson. “But Madison owned slaves too, and so did George Washington.”

Although she praised the multiethnic portrayal of the Founding Fathers, she wondered whether the casting has helped “submerge” the issue of slavery. She also mused about how the play diverged from the efforts of historians who for the past 50 years have tried to bring a more complicated narrative to the era.

“It’s not a purely heroic narrative,” she said. “It’s not just celebration. The Founders accepted slavery as an institution.”

Still, she hopes the show’s popularity will serve as a catalyst for a renewed focus on early American history, both in schools and the wider culture. The show’s creator, Lin-Manuel Miranda, is a “genius,” she said.

But if one wants to find out who the real Hamilton is, insists Gordon-Reed, the answer is not on Broadway.