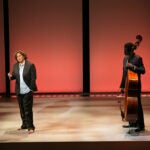 Author and conservationist Terry Tempest Williams is the guest speaker Wednesday at the Environment Forum at the Mahindra Center, a new initiative convened by Dean of Arts and Humanities Robin Kelsey and history Professor Ian J. Miller. The forum is a three-year effort to highlight new work being done in the humanities on environmental issues.

“It’s a catalytic move,” said Miller, who also serves as faculty associate at Harvard’s Center for the Environment. “The forum is meant to help better understand the impediments to changing attitudes in the face of an emerging climate crisis and the humanities have an important role to play.”

The Williams event, which will be live-streamed from Tsai Auditorium, brings an “intellectual eloquence” to “understanding — and in fact creating —beauty and meaning in a changing world,” he added.

“It sounds hokey, but it’s really important. Climate change demands a scientific and policy response. On a fundamental level, it demands a human response. She brings those abstract, rather grand problems into the personal.”

The Gazette interviewed Williams, formerly of the University of Utah, now a visiting professor at Dartmouth, about the experience that brought her to the Harvard initiative.

GAZETTE: Your talk kicks off the Environment Forum at Harvard, part of a push toward the environmental humanities. What roles do writing and the humanities play in environmental policy and combating climate change?

WILLIAMS: The world is made of stories. The humanities help us to make sense of these stories. Environmental humanities creates a bridge between the internal and external landscape of stories. Writing becomes a process of this integration and exploration, both personal and political. I love that Harvard is thinking about this bridge and how academic rigor in the classroom and engagement in the world can be brought into a creative alliance. Our students are hungry for this. Climate justice is something they care deeply about. It is not an abstraction, but something that is affecting their lives, their future.

We have to have room in the academy where students can go out and experience ideas on the ground. To me that’s what environmental humanities is about. Taking the text and the ideas explored in the classroom and then going out in real communities and finding themselves in relationship to a larger world. Call it ground-truthing.

I think this is where deep leadership is fostered. At the University of Utah, fossil fuel development is not an abstraction. For our students to be able to talk to people working at the tar sands mine in Vernal, Utah, to hear them talk about their own lives and struggles, is both deeply humbling and instructive. Empathy ensues. It’s both personal and political and that sometimes makes people uncomfortable, but I don’t think you can separate them. I see this generation of students as pragmatic visionaries.

WILLIAMS: “The Hour of Land” is a testament to environmental humanities and there are ties to Harvard. Jorie Graham [Boylston Professor of Oratory Rhetoric, Department of English] is a trusted friend of mine. It was really her poem “We” that allowed me to see this book in a different way. She was generous enough to let me use 13 lines as the backbone and scaffolding of this book. I view this book in collaboration with this poem. Language and landscape are my inspiration. Collaboration is the way forward. All these ideas, a poetics of place alongside a politics of place, are interrelated and interconnected.

GAZETTE: Earlier this year, you wrote in favor of permanent protection for land in Maine near Mount Katahdin. In August, President Obama turned those more than 87,000 acres into the new Katahdin Woods and Waters National Monument. Why was that such an important step, and how did you get involved in the effort?

WILLIAMS: I have deep roots in Maine. I care about these wildlands. This year was the 100th anniversary of Acadia National Park. Roxanne Quimby [co-founder of Burt’s Bees] with her generosity of spirit bought these lands with the intent to turn them over to the U.S. government. I so admire that we have these kinds of benefactors who are willing to use their wealth for the common good. Was there opposition? Yes. But what I so admired about her son Lucas St. Clair was that for the last five years he has gone door to door and talked to almost every citizen in that county and listened to them and is still listening. Together they created a space for conversation.

GAZETTE: You’ve written passionately on nature and wildlife. Is there a story about how this interest began?

WILLIAMS: My grandmother gave me “Peterson Field Guide to Birds of Western North America” when I was 5 years old. As a child, this was nothing short of magic. Those birds, those colored plates, became pages of my journal. I marked the date and place where I saw them for the first time. And then my family’s business, ironically, laid natural gas pipe throughout eight western states. My father is very proud of the scars he has made across the Interior West, doing that work. As children we would travel with him and camp. While the men in my family were viewing where the pipe would be laid and trenches dug, I would see the prairie dog towns, watch the red-tailed hawks and coyotes. My brothers would shoot them. Early on I saw this paradox, loving the land while destroying the land. It fueled my imagination.

The kinds of tension that circulated around our dinner table — there were four generations — was more than heated. It was boiling. I remember one Christmas Eve, my father said, “It’s easy for you to talk about desert tortoises being endangered and write poems about them while our business is shut down because of the laws protecting them, but those poems don’t pay the bills.”

GAZETTE: The National Park Service celebrates its centennial this year. How do you reconcile the popularity of the parks with the politics of cutbacks in federal funds and selling? If 300 million people visit each year, how do you make sense of the disconnect? And how do you reach those visitors in a way that empowers them?

WILLIAMS: There has to be a tax or endowment to support our national parks. We are loving the parks to death, but we’re not willing to pay for them. There’s a deep resentment of federal control in this country, and it’s not just found in the West. I have talked to re-enactors in Gettysburg, for example, asking them what were the causes of the Civil War. They said it was fought over state rights, not slavery. The Civil War has never ended — I’m not sure we’ve ever healed those wounds. It comes back to the stories we tell ourselves. For far too long, it has been one story being told, white and privileged. This is changing as we now are seeing a mosaic of stories celebrated within our national parks, be it Native Americans [the Bear Ears National Monument proposal in Utah], African-Americans [the Harriet Tubman Underground Railroad National Monument in Maryland], or Latinos [the Cesar E. Chavez National Monument in California].

GAZETTE: In the winter, you and your husband purchased more than 1,100 acres in Utah at a Bureau of Land Management fossil fuel lease auction. Why did you take that bold step, and what are your plans for the land?

WILLIAMS: I was in Paris during the U.N. Climate Conference. I participated in the red-line march to keep fossil fuels in the ground. As the Eiffel Tower came into view, I stopped and I thought, “Enough. I’ve been in enough protests and marches. I need to go home and begin my work there.” Utah for me is ground zero. On Feb. 16, I sat with a room full of bidders from the extractive industry at the quarterly Bureau of Land Management oil and gas lease auction. I had to join. My husband and I purchased two leases totaling 1,120 acres for $1.50 an acre, less than a cup of coffee. We are interested in exploring a different kind of energy, creative energy, the kind of energy that can fuel a movement to keep it in the ground. We have not yet received those leases from the BLM. We paid our money. They don’t know what to do with us. This is where I think it’s about putting our love into action.

It’s not any one of these actions. It’s a mosaic that’s being created. This is what environmental humanities is on the ground. It is collaborative, transformative, and, I would argue, begs for student engagement. We have never been here before.

Williams’ talk is at 6 p.m. on Wednesday at Tsai Auditorium S010, CGIS South.