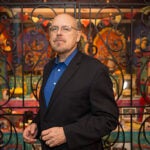 Examining U.S.-Mexico ties in the age of Trump

Freed by Iran, Washington Post reporter and wife settle in as journalism fellows at Harvard

It was an unimaginable, Kafkaesque ordeal. Iranian police arrested Washington Post reporter Jason Rezaian and his wife, Yeganeh, on vague charges in July 2014. An Iranian journalist for The National, she was released a short time later, but Rezaian, an American who grew up in the Bay Area of California, remained locked away in a notorious prison for months, even spending several weeks in solitary confinement. He was convicted of espionage in October 2015 after what analysts outside Iran said was a show trial.

Rezaian’s captivity became international news thanks to relentless efforts by his brother, Ali, Post executive editor Martin Baron, and others who took to social media via the hashtag #FreeJason to raise awareness of his plight and put pressure on top U.S. government officials, even as diplomatic negotiations heated up to strike what would become a landmark nuclear accord with Iran.

In January, 543 days after his arrest, Rezaian was released along with three others as part of a prisoner swap in tandem with the controversial return to Iran of $400 million in frozen assets that had been held by the United States since the overthrow of Mohammad Reza Shah Pahlavi in 1979.

Now back in the United States, Rezaian, 40, has avoided the spotlight and hasn’t spoken publicly about his experience. He’ll spend the academic year at Harvard as part of the 79th class of Nieman Fellows studying the evolution of U.S.-Iran relations. His wife will be a fellow at the Shorenstein Center on Media, Politics and Public Policy this fall and write about the challenges facing female journalists in Iran. The couple recently spoke with the Gazette as they began their new lives in Cambridge.

GAZETTE: How are you settling into campus life?

REZAIAN: I love it. It’s been a long time since I’ve been on a campus, and all the schools I’ve attended have been very urban. Obviously, this is the campus, so it’s pretty exciting to be around it. For me, it’s just a lot of fun to experience that and see the undergraduates and their elation and anxiety about coming to a new place. I feel a lot of it as well. I think for me the challenge is going to be just keeping track after not having a lot of things to keep track of for a while (laughs).

GAZETTE: What have you been up to since January?

REZAIAN: I’ve been doing some writing for myself. I’m still with The Post on an extended leave.

GAZETTE: Do you envision going back at some point?

REZAIAN: I hope so. That’s the plan. I’m on staff. The news executives and I have spoken about not wanting to rush into assignments. Everybody’s been fantastic, and they said “You know what, let’s push it off until next year, and we can talk about it in early 2017.”

GAZETTE: Outside of this fellowship, are you based now in D.C.?

REZAIAN: For now. I’d never lived there before. I’d always lived in San Francisco; that’s where I grew up. And I had been in Tehran for seven years. But Yegi and I really love D.C., and I think ultimately that’s where we’ll probably end up. I had visited a few times in my early 20s and then eight or nine years ago. It’s a different town, and we’ve obviously had a really nice reception there since all of this happened to us, and it feels like the right place for us to probably lay some roots down for a while.

GAZETTE: You haven’t spoken publicly yet about your experience? Why is that?

REZAIAN: I’m planning on how I want to tell my own story. I feel like my situation and my experiences are unique in some ways. I was a journalist thrust into this really bizarre and, in some ways, incredible situation in the midst of the beat that I was covering. So I think unpacking this story is my job to do. I just have felt like it would be better to really process it and discover all the moving pieces before I reveal too much about what it was like.

GAZETTE: You’re used to writing about other people. You know what to do, you know what to ask people, how to approach things and research things. How do you write about yourself, especially when you probably had the least information about what was happening?

REZAIAN: Yeah. It’s difficult. There’s a lot of reporting I have to do. I’m always surprised when I read a story that’s reported from a great distance. And I think in this situation, to do justice to myself and my experience, I really have to be cognizant and mindful of really reporting it out and finding out what happened.

GAZETTE: Were you surprised at the amount of attention your imprisonment received?

REZAIAN: Oh yeah, sure. I had some knowledge from visits from my wife and my mom about the efforts that were being undertaken on my behalf, but there was no way in the isolation that I was experiencing that I could really comprehend the extent to which the support reached out in so many different directions.

GAZETTE: Not just at the paper and your family and friends, but strangers. There was a hashtag #FreeJason going around, there was a letter to the Iranian government from famous academics like Noam Chomsky, Steven Pinker, and others, a petition signed by people who don’t even know you …

REZAIN: More than half a million people!

GAZETTE: It was a cause célèbre. You became the face of journalists who’ve been persecuted and attacked, which is many.

REZAIAN: I think it’s a challenging mantle to carry. But it was a really overwhelming thing to come out and witness.

GAZETTE: It must have been very rewarding to see how committed your family, friends, and even strangers were about you, working so hard to get you released?

REZAIAN: That was for me really the most — I don’t know if gratifying is the right word. … The commitment of my family, my employers, my colleagues in the media [was] just above and beyond what anybody could ever ask for.

GAZETTE: Will you or Yegi ever go back to Iran?

REZAIAN: That’s such a hard question for me to answer. I think that I’m a really optimistic person, and I believe that we will. But a lot will have to happen globally and personally [laughs] before the stars would align.

GAZETTE: Could you see yourself being a foreign correspondent somewhere else at some point?

REZAIAN: I haven’t thought about it too much yet. I feel like I need to process and tell this story before I move on to other possible beats, but I can tell you I’m not going to stop writing.

GAZETTE: I read that you went to Iran with the hope of telling stories that better reflected the complexity and richness of daily life there. Will you continue to do that in some fashion, if not from Iran? And why is that important to you?

REZAIAN: For me, the best journalism is usually the best storytelling, and the best stories are those of real people. Sometimes those real people are people in positions of great prominence or power or adverse situations, and sometimes it’s just normal folks who help illuminate a situation, a place, a culture. And for me, that’s always been the best way of telling a story.

GAZETTE: In your interview with Anthony Bourdain on CNN’s “Parts Unknown” [filmed a couple of weeks before his arrest], you sounded very optimistic and positive about where Iran is headed (politically, economically, socially). Do you still feel that way?

REZAIAN: I think in any country you have macro situations and micro ones. Like a lot of places, it’s a country that’s evolving, and the thrust of that evolution I think is still being played out right now. And as I told you before, I’m a very hopeful person.

GAZETTE: Bourdain said Iran wasn’t what he expected. What is it about Iran today that Americans don’t know, but should?

Y. REZAIAN: I can just generally say that Iran is a very multilayered, controversial country. There are so many contrasts and controversies that question themselves within whole different layers. It’s not an easy place to wrap up in one answer or one question. It’s a very multicultural, multiethnic place. There are millions of things that if you never travel there, it’s easily possible that you never see or never hear of them. The people, culture, ideas, things that are happening in normal situations every day. It’s seven months that I’m here in America, and I just know that there’s a huge gap between the two nations. I’m not talking about the two governments. I’m just talking about the two nations. I just found that the knowledge of ordinary Americans about Iran is very small — which is totally expected.

REZAIAN: And I think that response of “Wow, it’s so different than what I expected” is pretty much the response of every foreign visitor we ever had — and we had a lot of them. And it’s a big part of why I chose to do that job. I’ve been very clear about this over the years: “No value judgment. There’s great things about this country, there’s terrible things about this country. Here it is.” This is my interpretation of that.

GAZETTE: Do ordinary Iranians view the U.S. government as darkly as many Americans view Iran’s?

GAZETTE: What attracted you both to Harvard, and what will you be doing?

REZAIAN: This is incredible. It’s the greatest university in the world, and really the greatest program for journalists, so it was an incredible opportunity to be around some really accomplished and varied colleagues from different backgrounds covering different parts of the world and bringing different skills and talents. I’m just really excited to be a part of it. I’m going to try and soak up as much as I can and try to get smarter. [Laughs.]

Y. REZAIAN: For me, I feel totally honored and blown away just to be here. It’s the greatest opportunity, and I’m very happy just to learn, see, and experience things that maybe a girl who just left Iran seven months ago cannot have the opportunity to see or learn. I’m very happy and excited to be here … I’m hopeful not only do we have so many things to learn, but also we have something at least to offer. At the Shorenstein Center, I have to do a research paper. It’s not definite yet, but the main focus is about female journalists in Muslim, patriarchal societies and what they go through to do their job, what are the hardships or difficulties.

REZAIAN: It’s really incredible, and just looking at our schedule, the people who we’ve come across in this first week of orientation, it’s awesome. You asked why we were drawn to this. I mean, it’s just the culmination of all these things. I’m just really looking forward to undoing some of the rough patch and the road that we went through over the last couple of years. Overall, I’m just looking for ways to enhance my storytelling skills and learn new skills and add them to what I already know, just to become a better journalist.