Examining U.S.-Mexico ties in the age of Trump 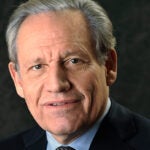 Celebrating the Pulitzers at 100

Of the 42 million immigrants who call the United States home, more than 11 million are Mexican. They represent the nation’s largest immigrant group, after Indians and Chinese, according to the Pew Research Center.

Over the past three decades, Mexican immigration has surfaced as an issue in every U.S. presidential election, but Republican candidate Donald Trump made it a pivotal part of his campaign from the start.

In June 2015, Trump announced his presidential bid with a tirade against Mexican immigrants, calling them criminals and rapists and promising to build a wall along the 2,000-mile border and make Mexico pay for it.

A week ago, Trump visited Mexico and displayed a softer side with President Enrique Peña Nieto. It lasted only a few hours. During a speech in Phoenix, he reclaimed his harsh position on immigration and repeated his border wall pledge.

The Gazette interviewed Davíd Carrasco, the Neil L. Rudenstine Professor of the Study of Latin America, who teaches at Harvard Divinity School, Harvard Extension School, and in the Department of Anthropology, about U.S.-Mexico relations and the thorny issues of immigration and the wall.

GAZETTE: Donald Trump’s disparaging words against Mexican immigrants are a central part of his presidential campaign. What do these attacks symbolize in the history of U.S.-Mexico relations?

CARRASCO: The relationship between the U.S. and Mexico has often been predatory. I see Donald Trump as an example of a predator in the way he posed next to Mexican President Enrique Peña Nieto, as if he was studying his prey, and in the way he tried to dominate the stage. The very same day, Trump came back to the United States, and, in front of a national audience, he debased, demeaned, and victimized Mexican immigrants by painting them in broad brushstrokes as criminals, as dangerous, as a kind of epidemic or existential threat to the United States economy and to the American culture. As a historian of religions, familiar with predator and prey relationships, we call this a process of scapegoating, which looks for a vulnerable member of your kin group to punish for the problems in the clan or the family, and the country itself. The intensity and meanness of Trump’s language is designed to scapegoat the Mexican people for insecurities internal to the U.S. Mexicans have launched several political revolutions within Mexico, each leading to a revitalization of its deep cultural heritage and imperfect struggles in search of an improved civic well-being. They have real capacities to negotiate effectively and work as political partners. Those capacities must be nurtured and supported, not blurred by scapegoating aggressors.

GAZETTE: When did the relationship between the U.S. and Mexico begin?

CARRASCO: It began with the formation of New Spain, which was settled in the 16th century and 17th century. What is now the southwestern part of the U.S. was part of New Spain long before it was the United States. Between the 17th and the 19th centuries, Spaniards, Spanish-speaking mestizos [a mix of indigenous people and Spaniards], and Mexicans began to populate and shape the culture of what are now Texas, California, Arizona, Utah, Nevada, Colorado, and New Mexico. All the while, indigenous people who had occupied these lands for many centuries interacted with this Spanish-speaking population. It’s important to learn this to understand how deep the historical relationship is between Mexico and the United States.

GAZETTE: It also helps us notice how old the Mexican presence in the United States is.

CARRASCO: Mexicans were present here even before the United States or the colonies were being shaped. Both Mexican and Spanish-speaking presence in the United States developed way before Benjamin Franklin and Thomas Jefferson. Spanish was spoken here before English was even spoken in the Eastern seaboard or the territory we now call the United States. But as years went by, after about 1800, Mexicans and U.S. citizens formed a kind of kinship in the areas where they coexisted. They occupied the same territory, the same house, as it were, and they exchanged food, language, and culture, forming mixed families and often bilingual communities. So when Trump insults and degrades Mexicans, Mexicans and Mexican-Americans become defiant because many of us understand how old our presence and contributions have been in the territory of the United States.

GAZETTE: The relationship between the U.S. and Mexico has often been filled with mistrust and uneasiness on both sides. When did the antagonism begin? Was it when the U.S. invaded Mexico in the 1840s?

CARRASCO: During the Mexican-American war, you had a struggling Mexican government located in Mexico City dealing with territories in its northern frontier that they didn’t have much control over. They ultimately yielded to occupying forces of the United States, and the Treaty of Guadalupe Hidalgo ceded half of Mexico’s territory to the United States, including Texas, California, Arizona, Nevada, Utah, and parts of New Mexico, Wyoming, and Colorado. But by that time, there were already thousands of Mexicans living in that area with deep roots. Look at all the names: Los Angeles, San Francisco, Nevada, and so forth. 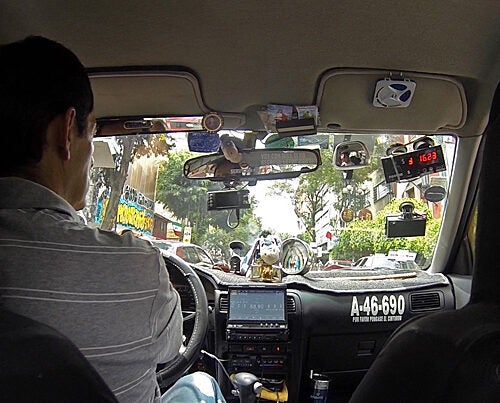 The makeover of Mexico City

Aided by Harvard experts, officials are tackling housing, pollution, and traffic problems — and solving them

GAZETTE: Let’s talk about the border. What’s the role the border has played in the relationship between the two countries?

CARRASCO: One of the problems the border brings is that people always understood the border as a borderline, but the borderline has always been ambiguous. People who lived on both sides of the borderline understood that there was a borderland, which is a much broader territory where Mexicans, Mexican-Americans, and Americans exchanged money, ideas, music, and food over hundreds of years, and therefore this borderline has never been the factor defining the culture of northern Mexico and the U.S. southwest. It has always been a frontera, or borderland, and this borderland has continued to expand. Some people say that the U.S.-Mexico borderland extends from Michoacán to Chicago. So the ambiguity of the borderline is in part what’s behind Trump’s obsession with the wall. He thinks if he can define the borderline with his wall then he can destroy the borderlands. But that’s not possible. He’s haunted by the revenge of geography.

GAZETTE: What does that mean?

GAZETTE: What would be the effects of building a wall? Which of the two countries would be most affected by it?

CARRASCO: A Mexican economist said recently that the Mexican president should have told Trump, “Go ahead, build the wall, and see what it does to your economy, because it’s going to cause the U.S. more pain and economic confusion than it’s going to cause us.” An immense amount of trade goes back and forth between the two countries, and we now know who benefits the most from NAFTA [the North American Free Trade Agreement]. It’s not Mexico. The two countries must find ways to work together rather than creating this dark fantasy of Mexicans as the big threats to democracy, because they are not. The greatest threats are within the U.S. — the insatiable demand for drugs, the immense production of weapons — and that is in part what was so disgusting about Trump’s speech the other night. It was a broad brush of scapegoating some American problems onto the Mexicans.

GAZETTE: Finally, are you hopeful that the relationship between the U.S. and Mexico will improve?

CARRASCO: An overview of history shows that the U.S. and Mexico have periods of cooperation as well as antagonism. So there is always hope. I’m hopeful that the new demography can lead to a better democracy in the United States. As for Trump, I have to say that when I saw him on the stage in Mexico, I realized that he had a dangerous precursor. During the Spanish conquest, there was a redheaded conquistador named Pedro de Alvarado. He caught the attention of the Aztecs because of his red hair and cruelty and they called him, partly in jest, Tonatiuh, the sun god. He participated with Cortés in the war to conquer Mexico City and was one of the most boisterous conquistadores. He led one of the most brutal massacres of unarmed warriors, musicians, and artists, which is still remembered to this day in Mexico. He had a very strange end. He was trying to put down a rebellion by Indians, and during the fight, his horse fell on him and crushed him. I think that’s going to happen to Donald Trump’s campaign.