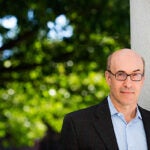 Want to thwart criminals? Take away their cash

Three faculty of Harvard Business School’s U.S. Competitiveness Project released a report today that cites political dysfunction as the greatest barrier to strengthening the nation’s competitiveness. The report, which contains five years of in-depth analysis on competitiveness and surveys of global business leaders and the public, lays out concrete steps that could be taken by the business community and government at all levels to improve the prospects of American workers and companies.

“Now, more than any time in recent history, the U.S. needs a national economic strategy involving action by business, state and local governments, and the federal government,” said Michael E. Porter, Harvard Business School (HBS) professor and co-chair of the project. “To make the U.S. more competitive, it is imperative that we have a fact-based national discussion about our economy and future prosperity. Unfortunately, the rhetoric this election year has added to the almost complete disconnect between the national discourse and the reality of what is causing our problems and what to do about them. This must change.”

“The U.S. economy is growing, but only slowly, and it’s leaving too many Americans behind,” said Jan W. Rivkin, HBS professor and co-chair of the project. “Economic anxiety is fueling angry, divisive political campaigns with proposals that could make the economy worse. The American political system is now threatening the American economy, and vice versa. We need a sober look at the strengths and weaknesses of the U.S. economy so that leaders in government, business, and other parts of society can work together on a national economic strategy for shared prosperity.”

The report aims to help bridge the gap between how Americans from different walks of life think about the nation’s economic challenges. The authors believe it is imperative that Americans understand why the country’s economic performance is weaker than in recent generations and how solving real problems will require people to compromise and move away from simplistic, ideological positions.

In the United States today, larger companies and the best-off citizens are thriving, but working- and middle-class Americans are struggling, as are many small businesses, a trend HBS observed consistently during the course of the project. To gauge how business leaders assess the prognosis for competitiveness — that is, U.S. firms’ ability to compete successfully in the global market while supporting high and rising living standards for the average American — the project surveyed HBS alumni on expected future trends in competitiveness and the consequences for job growth. The 2016 survey revealed that, for the first time since the surveys began in 2011, pessimism about U.S. competitiveness is deepening.

The survey found that:

In the aftermath of the Great Recession, contrary to the ill-informed diagnoses of many politicians and pundits, the project’s work made clear that America’s problems began well before 2008. The project identified 19 elements that determine national competitiveness, such as the corporate tax code and the political system, and asked HBS alumni to assess the strengths and weaknesses of each in this country. As business leaders on the front lines of global competition, HBS alumni are well-positioned to assess the strengths and weaknesses of the domestic business environment.

Historically, the authors noted, the United States has set a bold agenda in economic policy and competitiveness. The nation invested heavily in infrastructure and education, made a commitment to strict antitrust policy to ensure open competition, and created institutions for innovation. Bold policy initiatives strengthened the business environment and built crucial assets that enabled America to be competitive.

Today, the major obstacle to economic progress is politics, especially at the federal level, the study said. A large majority of alumni of every political affiliation believed that the political system has obstructed economic growth and competitiveness: 56 percent among Democrats, 82 percent among Republican, 74 percent among Independents, and 80 percent among those otherwise affiliated.

The report highlights how Washington has been largely ineffective, with the current Congress on track to enact fewer laws than any session since the 1940s. Yet, the authors said, this is a time when America needs the government to act because federal policy determines or deeply influences many of the weakest elements of the U.S. business environment.

To get a better understanding of business leaders’ views on federal policy changes that could improve competitiveness, the School asked alumni to state their preferences on policy areas that have been identified as having the greatest impact on economic growth. The strongest consensus was on improving infrastructure (endorsed by 80 percent of respondents), high-skilled immigration reform (77 percent), and streamlining regulation (71 percent). Responsible unconventional energy development — the subject of a polarizing debate pitting environmental groups opposed to fossil fuel development against the oil and gas industry — received 60 percent support. The report also broke down preferences for each policy area by political affiliation.

While the public and global business leaders agreed on America’s weaknesses, the public perceived the U.S. business environment as having very few strengths. The weaker support reflected that many people could neither agree nor disagree, or did not know, whether policy changes would be good or bad for the economy. For example, in the public survey, the greatest number of respondents (32 percent) said they didn’t know what action would create a sustainable federal budget. The report’s authors noted that divisive political rhetoric and uninformed national debate has left the average American confused about what the country needs to do to restore the economy.

The authors took a particularly close look at business tax reform, an example of a major policy area in need of reform that has been thwarted by political dysfunction.

“Tax reform is the single area with the greatest potential to immediately improve our economy. We are long overdue for structural reform of the tax code, given how the global economy has changed over the last 30 years and how little we have done to keep up with those changes,” said HBS Professor Mihir A. Desai. “Fortunately, our survey revealed broad consensus on the nature of the problems — particularly on corporate taxes — and the fruitful directions for reform. The survey also revealed several proposed reforms — a carbon tax, a new higher bracket, and the deductibility of dividends at the corporate level — that are really promising and that enjoy surprisingly broad support.”

Porter, Rivkin, and Desai called for establishment of a U.S. economic strategy with the goal of increasing shared prosperity. The report laid out detailed agendas for the business community, state and local governments, and the federal government to improve competitiveness. These included: business investment in workforce skills; regional economic collaboration between firms; cross-sector collaborations among leaders in government, business, nonprofits, educational institutions, labor organizations, and other partners; and an achievable eight-point policy plan for federal lawmakers, which includes corporate tax reform, easing immigration for high-skilled immigrants, infrastructure investments, and addressing distortions and abuses in the international trading system.