Toward a better screen 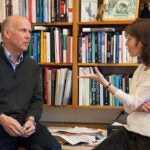 OLED screens use organic molecules that emit light when an electric current is applied. Unlike the ubiquitous liquid crystal displays (LCDs), OLED screens don’t require a backlight, meaning the display can be as thin and flexible as a sheet of plastic. Individual pixels can be switched on or off, dramatically improving the screen’s color contrast and energy consumption. OLEDs are already replacing LCDs in high-end consumer devices, but a lack of stable and efficient blue materials has made them less competitive in large displays such as televisions.

The interdisciplinary team of Harvard researchers, in collaboration with Massachusetts Institute of Technology (MIT) and Samsung, developed a large-scale, computer-driven screening process called the Molecular Space Shuttle that incorporates theoretical and experimental chemistry, machine learning, and cheminformatics to quickly identify new OLED molecules that perform as well as, or better than, industry standards.

“People once believed that this family of organic light-emitting molecules was restricted to a small region of molecular space,” said Alán Aspuru-Guzik, professor of chemistry and chemical biology, who led the research. “But by developing a sophisticated molecular builder, using state-of-the art machine learning, and drawing on the expertise of experimentalists, we discovered a large set of high-performing blue OLED materials.”

The research is described in the current issue of Nature Materials.

The biggest challenge in manufacturing affordable OLEDs is emission of the color blue. Like LCDs, OLEDs rely on green, red, and blue sub-pixels to produce every color on screen. But it has been difficult to find organic molecules that efficiently emit blue light. To improve efficiency, OLED producers have created organometallic molecules with expensive transition metals such as iridium to enhance the molecule through phosphorescence. This solution is expensive and it has yet to achieve a stable blue color. 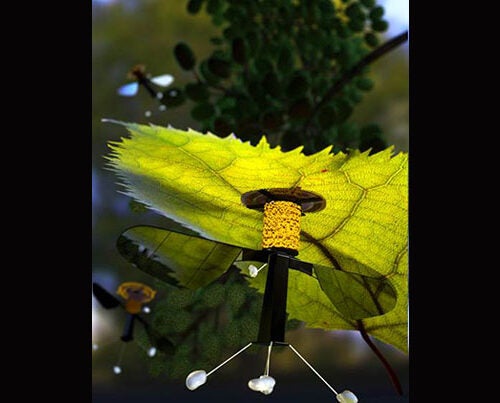 RoboBees can perch to save energy

New technique can extend the flying time of microrobots

Aspuru-Guzik and his team sought to replace these organometallic systems with entirely organic molecules.

The team began by building libraries of more than 1.6 million candidate molecules. Then, to narrow the field, researchers from the Harvard John A. Paulson School of Engineering and Applied Sciences (SEAS), led by Ryan Adams, assistant professor of computer science, developed new machine-learning algorithms to predict which molecules were likely to have good outcomes, and prioritize those to be virtually tested. This effectively reduced the computational cost of the search by at least a factor of 10.

“This was a natural collaboration between chemistry and machine learning,” said David Duvenaud, a postdoctoral fellow in the Adams lab and co-author of the paper. “Since the early stages of our chemical design process starts with millions of possible candidates, there’s no way for a human to evaluate and prioritize all of them. So, we used neural networks to quickly prioritize the candidates based on all the molecules already evaluated.”

“Machine-learning tools are really coming of age and starting to see applications in a lot of scientific domains,” said Adams. “This collaboration was a wonderful opportunity to push the state of the art in computer science, while also developing completely new materials with many practical applications. It was incredibly rewarding to see these designs go from machine-learning predictions to devices that you can hold in your hand.”

“We were able to model these molecules in a way that was really predictive,” said Rafael Gómez-Bombarelli, a postdoctoral fellow in the Aspuru-Guzik lab and first author of the paper. “We could predict the color and the brightness of the molecules from a simple quantum chemical calculation and about 12 hours of computing per molecule. We were charting chemical space and finding the frontier of what a molecule can do by running virtual experiments.”

Still, finding these super molecules takes more than computing power — it takes human intuition, said Tim Hirzel, a senior software engineer in the Department of Chemistry and Chemical Biology and co-author of the paper.

To help bridge the gap between theoretical modeling and experimental practice, Hirzel and the team built a Web application for collaborators to explore the results of more than half a million quantum chemistry simulations.

Every month, Gómez-Bombarelli and Jorge Aguilera-Iparraguirre, another co-author and postdoctoral fellow in the Aspuru-Guzik lab, selected the most promising molecules and used their software to create “baseball cards,” profiles containing important information about each molecule. This process identified 2,500 molecules worth a closer look. The team’s experimental collaborators at Samsung and MIT then voted on which molecules were most promising for application. The team nicknamed the voting tool “molecular Tinder” after the popular online dating app.

“We facilitated the social aspect of the science in a very deliberate way,” said Hirzel.

“The computer models do a lot, but the spark of genius is still coming from people,” said Gómez-Bombarelli.

“The success of this effort stems from its multidisciplinary nature,” said Aspuru-Guzik. “Our collaborators at MIT and Samsung provided critical feedback regarding the requirements for the molecular structures.”

“The high-throughput screening technique pioneered by the Harvard team significantly reduced the need for synthesis, experimental characterization, and optimization,” said Marc Baldo, professor of electrical engineering and computer science at MIT and co-author of the paper. “It shows the industry how to advance OLED technology faster and more efficiently.”

After this accelerated design cycle, the team was left with hundreds of molecules that perform as well as, if not better than, state-of-the-art metal-free OLEDs. Applications of this type of molecular screening also extend far beyond OLEDs.

“This research is an intermediate stop in a trajectory toward more and more advanced organic molecules that could be used in flow batteries, solar cells, organic lasers, and more,” said Aspuru-Guzik. “The future of accelerated molecular design is really, really exciting.”

The research was supported by the Samsung Advanced Institute of Technology.