RoboBees can perch to save energy 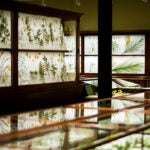 New technique can extend the flying time of microrobots

Call them the RoboBats. In a recent article in Science, Harvard roboticists demonstrate that their flying microrobots, nicknamed the RoboBees, can now perch during flight to save energy — like bats, birds, or butterflies.

“Many applications for small drones require them to stay in the air for extended periods,” said Moritz Graule, first author of the paper, who conducted this research as a student at the Harvard John A. Paulson School of Engineering and Applied Sciences (SEAS) and Harvard’s Wyss Institute for Biologically Inspired Engineering. “Unfortunately, smaller drones run out of energy quickly. We want to keep them aloft longer without requiring too much additional energy.”

The team found inspiration in nature and simple science.

RoboBees use static electricity to stick on walls

The RoboBee, pioneered at the Harvard Microrobotics Lab, uses an electrode patch and a foam mount that absorbs shock to stick to ceilings and overhangs. The robot takes off and flies normally. When the electrode patch is supplied with a charge, it can stick to almost any surface, from glass to wood to a leaf. To detach, the power supply is simply switched off.

“A lot of different animals use perching to conserve energy,” said Kevin Ma, a postdoc at SEAS and the Wyss Institute and co-author. “But the methods they use to perch, like sticky adhesives or latching with talons, are inappropriate for a paper clip-size microrobot, as they either require intricate systems with moving parts or high forces for detachment.”

Instead, the team turned to electrostatic adhesion — the same basic science that causes a static-charged sock to cling to a pants leg or a balloon to stick to a wall.

When you rub a balloon on a wool sweater, the balloon becomes negatively charged. If the charged balloon is brought close to a wall, that negative charge forces some of the wall’s electrons away, leaving the surface positively charged. The attraction between opposite charges then causes the balloon to stick to the wall.

“In the case of the balloon, however, the charges dissipate over time, and the balloon will eventually fall down,” said Graule. “In our system, a small amount of energy is constantly supplied to maintain the attraction.”

The RoboBee, pioneered at the Harvard Microrobotics Lab, uses an electrode patch and a foam mount that absorbs shock. The entire mechanism weighs 13.4 mg, bringing the total weight of the robot to about 100 mg — similar to the weight of a real bee. The robot takes off and flies normally. When the electrode patch is supplied with a charge, it can stick to almost any surface, from glass to wood to a leaf. To detach, the power supply is simply switched off. 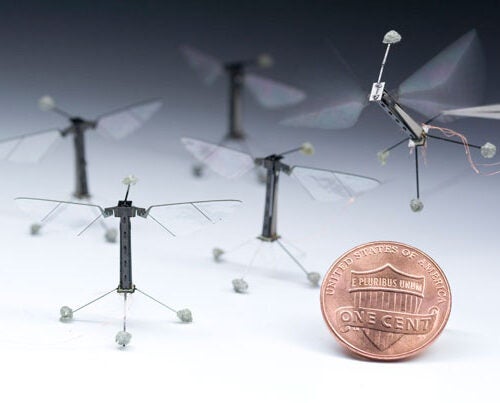 “One of the biggest advantages of this system is that it doesn’t cause destabilizing forces during disengagement, which is crucial for a robot as small and delicate as ours,” said Graule.

The patch requires about 1,000 times less power to perch than it does to hover, offering to dramatically extend the operational life of the robot. Reducing the robot’s power requirements is critical for the researchers, as they work to integrate onboard batteries on untethered RoboBees.

“The use of adhesives that are controllable without complex physical mechanisms, are low power, and can adhere to a large array of surfaces is perfect for robots that are agile yet have limited payload — like the RoboBee,” added Robert Wood, Charles River Professor of Engineering and Applied Sciences at SEAS and the Wyss Institute, and senior author of the study. “When making robots the size of insects, simplicity and low power are always key constraints.”

Right now, the RoboBee can only perch under overhangs and on ceilings, as the electrostatic patch is attached to the top of the vehicle. Next, the team hopes to change the mechanical design so that the robot can perch on any surface.

“There are more challenges to making a robust, robotic landing system, but this experimental result demonstrates a very versatile solution to the problem of keeping flying microrobots operating longer without quickly draining power,” said Ma.

The paper was co-authored by Pakpong Chirarattananon, Sawyer B. Fuller, Noah Jafferis, Matthew Spenko, and Roy Kornbluh. The research was funded by the National Science Foundation, the Wyss Institute for Biologically Inspired Engineering, and the Swiss Study Foundation.