For journalism, the future is now 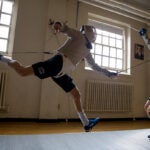 In a Q&A session, new Shorenstein director peers down rocky road ahead

The change may sound like part of a media satire by comedian John Oliver — a technology whiz takes over an esteemed teaching and research center at Harvard dedicated to strong journalism — but it’s no joke. And Nicco Mele is definitely not coming in to push for more stories about puppies.

As Mele settles in as the new director of the Shorenstein Center on Media, Politics and Public Policy at Harvard Kennedy School (HKS), his expertise dovetails with the natural and necessary recognition that journalism’s survival is inextricably linked to the digital world. He took the reins from Thomas Patterson, the Bradlee Professor of Government and the Press, who served as acting director during the 2015-2016 academic year.

An Internet strategist and political junkie, Mele first made his mark in the digital operation for former Vermont Gov. Howard Dean during his 2004 presidential bid, work that many observers called groundbreaking for its success at using the Internet and social media to reach voters and raise money from small donors.

Since then, Mele taught politics and media at HKS from 2009 to 2014 before joining the Los Angeles Times as a senior vice president and deputy publisher. A former Shorenstein Center Visiting Murrow Lecturer and Institute of Politics fellow, Mele currently serves on the board of the Nieman Foundation for Journalism at Harvard.

He spoke with the Gazette about the press’ role in this election, the state of the news business, and where the industry and the Shorenstein Center are headed.

GAZETTE: What drew you back to Harvard and specifically to this position, and how do you envision that your vantage point and expertise will be felt at the Shorenstein Center?

MELE: I really missed the classroom. It’s that simple. The other thing was this presidential election is the clearest example of the dangers democracy faces with a weakened press. The crisis facing journalism is really a business crisis, which is: How do we make money and have a sustainable, well-funded news ecosystem that holds power accountable and informs the public — both of those crucial to the role that the press plays in a democracy. My experience in the technology world and in my brief stint at The Los Angeles Times was really about trying to figure out new business models to support and sustain quality reporting. The kind of innovation and clear-eyed rigor required to succeed in the digital world as a news organization feels like it has a lot of applications and opportunity [here] on campus.

GAZETTE: What did you take away from your time at The L.A. Times, and is there any reason to be hopeful for the future of the news business? Or is it in an irreversible decline where the choices are to become a company like TRONC or some other “multiplatform content generation distribution network,” to get bought by a benevolent billionaire, or to go out of business?

MELE: One of my main takeaways out of that experience is there are real opportunities that don’t involve philanthropies or billionaires subsidizing local news. But the pursuit of them requires a combination of innovation, courage, and ferocity. I feel a little complicated about TRONC (which owns The L.A. Times). On the one hand, the news business has been in dire need of people willing to innovate and try new things and take real risks. On the other hand, the approach they’ve outlined thus far is just not that credible and has not held up. And in fact, I daresay, it’s dangerous to suggest that there is any silver bullet. The work that has to be done to build sustainable business models for news is hard, is complicated, has plenty of opportunity, but is not the kind of business that’s rewarded by buzzwords. 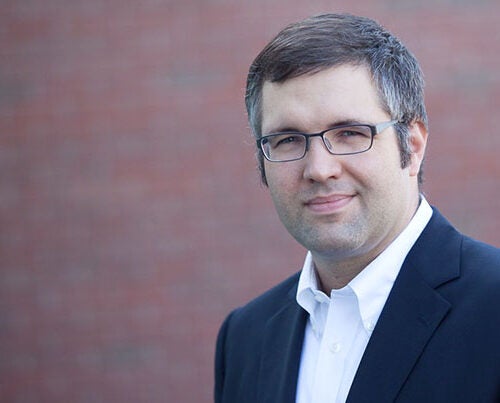 Journalist, author, and publisher Mele is interested in 'a healthy future for digital journalism'

GAZETTE: So what are the big challenges or threats to journalism and the news business in the coming decade?

MELE: The primary crisis facing news is a business-model crisis, and it’s primarily about local and regional news. A second is, I do think the kind of consolidation of the news and journalism profession into a really well-defined elite is problematic. Other problems facing the news are about sustaining attention of the audience in a multidevice, multichannel multiverse. One of the primary ways we navigate it is through algorithms that customize our experience of the world. Those algorithms have different kinds of bias in them, from confirmation bias to other, more nefarious kinds of bias. And a challenge comes in understanding the ways algorithms intentionally or unintentionally shape our world view and make it harder and harder to have a shared experience as the public.

Another challenge facing the news is the role of billionaires. As the industry is more and more distressed, people like John Henry and Jeff Bezos snap up newspapers, storied brands that carry great political and municipal power. Sometimes we’re seeing some apparent benevolence, as in the case of Bezos. Sometimes we’re seeing quite the inverse, as in the case of Sheldon Adelson [who purchased the Las Vegas Review-Journal last year]. And not only that, we have [businessman] Peter Thiel trying to sue Gawker out of existence. It’s a combination of the increased concentration of wealth at the top of the pyramid in the United States and the distressed condition of news businesses that combine for a very challenging environment.

It’s the students at the Kennedy School who are going to be leaders in a world where the traditional institutions are shrinking and distrusted, and I think that makes it harder to govern. — Nicco Mele

GAZETTE: What role should academia play in today’s journalism/media environment, and how do you envision the Shorenstein Center will figure into that over the next few years?

MELE: I’m sure there are going to be some new initiatives. Exactly what they are, it’s a little too soon to say. There are lots of interesting projects and research and work to do. My task is focusing on a couple that I think will take competitive advantage of what the Kennedy School as an institution brings to the table, and that are fun and compelling.

The center has a couple of different roles. One is what you might call a watchdog or accountability role. The Shorenstein Center has been in the past and continues to be a conduit, almost like an I.V., for getting more knowledge and well-established academic research into journalism and into the public sphere. We have this project Journalist’s Resource, where we try to increase the “nutritional content” in terms of knowledge in our news. That’s been pretty successful over the last few years, and I certainly hope to grow and extend that. That’s a crucial link between the powerful and important research of the academy and the public space.

The third thing, which is in some ways most important, is the way we engage students, especially students of public policy, to think about the public sphere, to think about what difference information makes in a democracy, to think about the role of the media in deciding what’s newsworthy and shaping public discussion. It’s the students at the Kennedy School who are going to be leaders in a world where the traditional institutions are shrinking and distrusted, and I think that makes it harder to govern. [The issues involve] figuring out the solutions, whether they’re about improving and strengthening the institution of journalism, but also getting us to think about how one is a public leader in an age of radical transparency and no filters. Those are some of the real challenges I believe the center is well prepared to tackle.

Here we are in an American election where it’s very clear that this is both a crisis of the media and a crisis of the political process that has brought us a major nominee in Donald Trump. That intersection of the media, politics, and public policy is exactly what the Shorenstein Center was designed to shape and contribute to, and so figuring out how we tackle that crisis head-on over the next few years and bring it hope and direction and good ideas, with rigor, is my priority.

GAZETTE: What do you think of the 2016 election so far? How is the so-called Twitter Election pushing the envelope in positive and negative ways? And are we seeing anything that will become a standard part of future campaigns?

MELE: That’s a great question, and the cop-out answer is that we don’t know yet and that in fact, usually it takes a while for this to show up. In my experience, the political establishment tends to learn the wrong lesson from an election. In 2004, John Kerry did not really pick up the [Howard] Dean small-dollar fundraising apparatus, nor did Hillary in ’08. It was Obama who did. It’s very hard to imagine out what from this cycle will be carried forward. I do think there are a couple of really important questions that I’m curious to see play out in the next 100 days. One is, for probably about 50 years, American politics has been dominated by television and television advertising. Jeb Bush and his campaign and his super PAC spent north of $100 million on television advertisements with no discernible impact. Hillary is dramatically outspending Donald Trump in television advertisements. It’s not clear to me yet if there’s any impact. Conversely, Trump used the primary debates as a way to dominate the media cycle.

Two items of conventional wisdom may be turned on their head: One is the power and importance of 30- and 60-second television advertisements, and two is the power and importance of the debates in the primary season. One question is, what is the role and value of television in a political campaign? A second question we’re looking at is, how do we think about Twitter and political candidates in a media landscape without gatekeepers and without accountability, and what does that mean for democracy, and what does that mean for a platform like Twitter? Does Twitter have any obligation to the health of the democracy? How future candidates might or might not use Twitter is a really interesting question and seems in part like a matter of style: Are you comfortable in the Twitterverse or not, and do you understand the relationship between Twitter and the media cycle or not? How that plays out, that’s an open question in my mind.

Hillary, in addition to spending a lot more money on television thus far than Donald Trump is also spending an order of magnitude more money for field organizing and voter turnout. There are some really fundamental questions about political tactics, political strategy, and the role of the media that in this election are surfacing. I think if you ask me in December, I’d be willing to make some prognostications, which almost certainly will be wrong for 2020.