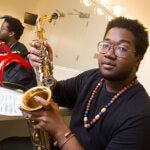 Journalist, author, and publisher Mele is interested in 'a healthy future for digital journalism'

Nicco Mele, the Wallis Annenberg Chair in Journalism at the University of Southern California and former senior vice president and deputy publisher of The Los Angeles Times, has been named the new director of the Shorenstein Center on Media, Politics and Public Policy at Harvard’s John F. Kennedy School of Government. Mele will begin his service as director on July 1.

“Nicco Mele is an innovative thinker and teacher whose work has focused on the intersection of politics, technology, and media,” said Douglas W. Elmendorf, dean of the Kennedy School. “We are thrilled that he is returning to the Kennedy School to work with faculty, students, and scholars to advance our understanding of these critically important issues.”

The Shorenstein Center is dedicated to exploring and illuminating the intersection of media, politics, and public policy in both theory and practice. The center was established in 1986 with a generous gift from Walter H. and Phyllis J. Shorenstein, in memory of their daughter, Joan, as a tribute to her and to the standards she set for accurate, thorough, and dignified reporting of current events. It is known for its teaching, research, visiting fellowship program, engaging events, and the Journalist’s Resource website.

As director, Mele will set the strategic direction for the Shorenstein Center, succeeding Thomas Patterson, Bradlee Professor of Government and the Press, who has been serving as interim director since July 1, 2015, and Alex Jones, director from 2000 to 2015.

“Nicco Mele is the perfect choice to be the Shorenstein Center’s next director,” Patterson said. “He has a deep understanding of how digital change is affecting the media’s role in our democracy, not only as a source of public information but as a means of citizen advocacy.”

Mele’s first book, “The End of Big: How the Internet Makes David the New Goliath,” was published by St. Martin’s Press in 2013. In it, he explores the consequences of living in a socially connected society.

From 2009 to 2014, Mele served on the faculty of the Harvard Kennedy School, teaching courses on the Internet and politics. In the spring of 2009, he was the visiting Edward R. Murrow Lecturer at the Shorenstein Center, and in the fall of 2008 he was a fellow at the Institute of Politics. Prior to joining the Kennedy School, Mele taught graduate courses in communications at Johns Hopkins University.

“At this critical moment for media and politics, a healthy digital future for journalism remains one of the great challenges of our era, and is essential to a healthy democracy,” said Mele. “I am delighted to join the distinguished team at the Shorenstein Center.”

Born to parents in the U.S. Foreign Service, Mele spent his early years in Asia and Africa before graduating from the College of William and Mary with a degree in government. He then worked for several high-profile advocacy organizations, where he developed the use of social media as a fundraising tool. As webmaster for Gov. Howard Dean’s 2004 presidential bid, Mele and the rest of the Dean campaign team pioneered the use of technology and social media in election campaigns. Subsequently, he co-founded Echo & Co., a digital consulting firm with offices in Boston and Washington, D.C.

Mele serves on the board of the Nieman Foundation for Journalism at Harvard and is a senior fellow at the USC Annenberg Center on Communication Leadership & Policy and a contributor to the Harvard Business Review. He co-founded the Massachusetts Poetry Festival, serves on the board of noted poetry publisher Tupelo Press, and in 2014 he co-produced a documentary about the poet W.S. Merwin, titled “Even Though the Whole World is Burning.”