Ahead of Bauhaus centennial, a digital gateway 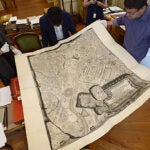 Beauty inside and out

In less than three years, the world will mark the 100th anniversary of the founding of the Bauhaus, the influential school of modernist art and design active during the years of Germany’s Weimar Republic (1919–33). The Harvard Art Museums will be no exception, with plans underway to mount a special exhibition in 2019 focused on connections between the Bauhaus and Harvard. However, some of the groundwork for the exhibition has already found a place online.

A digital resource on the museums’ website offers a wealth of Bauhaus-related materials, research, and other information. Conceived and edited by Robert Wiesenberger, the Stefan Engelhorn Curatorial Fellow at the Busch-Reisinger Museum, the Bauhaus Special Collection gives users access to records for the more than 32,000 Bauhaus-related objects in the museums’ collections and archives. These include photographs, textiles, paintings, and periodicals. Geared toward students, scholars, and the general public, the site demonstrates the breadth and strength of the collection, and supports scholarship on the Bauhaus.

Founded by architect Walter Gropius, the Bauhaus promoted collaboration across creative disciplines as part of a utopian project of designing a new world. Important modernists, such as Josef and Anni Albers, Lyonel Feininger, Wassily Kandinsky, Paul Klee, and Oskar Schlemmer, taught in the school’s various workshops, realigning hierarchies of high and low by embracing new technologies, materials, and media, and enacting cosmopolitan forms of communal living. Though the school existed for only 14 years, its influence has been far-reaching, extending into the ways we teach, learn, and live even today.

It’s no coincidence that a vast archive of Bauhaus material resides at Harvard. “Both during and after the school’s brief existence in Europe, Harvard was a key site for the reception, documentation, and dissemination of Bauhaus ideas,” Wiesenberger said. “This came about through the work of its students, museum curators, and émigré faculty.”

The University was the first location in the United States to host a Bauhaus exhibition, organized by Harvard undergrads in 1930. Gropius himself chaired the Department of Architecture at the Graduate School of Design from 1937 until 1952 and brought Bauhaus student-turned-master Marcel Breuer to join the faculty. By introducing Bauhaus pedagogy — as well as practitioners — to Harvard, Gropius shaped a new generation of architectural modernists, such as I.M. Pei and Philip Johnson. This pedagogical legacy also informed the founding of the Carpenter Center for the Visual Arts, where the practice of the arts is encouraged alongside theoretical study. 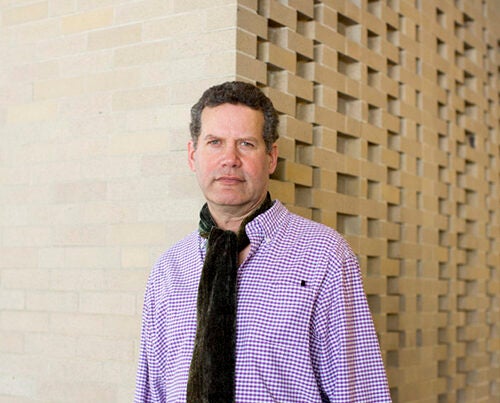 Gropius literally left his mark on campus with his Graduate Center, which opened in 1950. A modernist complex of dormitories and a commons building, the center featured the art of some of his modernist allies and former Bauhaus colleagues, including Hans Arp, the Alberses, and Herbert Bayer.

Gropius and Charles Kuhn, then curator of the Germanic Museum (now the Busch-Reisinger Museum) collaborated to form what was variously referred to as Harvard’s Bauhaus study collection or Bauhaus archive. After World War II, Germany had neither the will nor the resources to preserve Bauhaus objects. The Germanic Museum, however, felt obligated to do so. Gropius solicited gifts from his Bauhaus contacts, and works of art arrived by the hundreds for incorporation into the collection. Correspondence, student notes, and other ephemera were added to the archives.

“It’s amazing material,” Wiesenberger said, “but not enough people know it’s here or how to view it.”

The Harvard Art Museums’ digital Bauhaus Special Collection aims to broaden awareness of both the Bauhaus and its afterlife in America, specifically at Harvard. It presents a history and chronology of Harvard’s Bauhaus-related holdings, and enables easier access to virtual copies of all of the objects. A menu bar lets users browse topics specific to the Bauhaus, such as “The Bauhaus at Harvard,” “Pedagogy,” and “Typography.” Bauhaus artists, as well as students of those artists (and in some cases, even students of students), are searchable, as are time periods, techniques, and more.

The resource also includes a history of all Bauhaus shows held at the Busch-Reisinger/Germanic Museum, an extensive bibliography, and an annotated Google map of Bauhaus-related sites in and around Boston. These resources could fuel future Bauhaus research and catalyze new engagement with the collection, particularly through the museums’ Art Study Center.

As the Harvard Art Museums prepare for the 2019 Bauhaus exhibition and related centennial events, the hope is that the Special Collection will serve multiple audiences.

“We want this to appeal to all levels,” Wiesenberger said. “If you’ve never heard of the Bauhaus, you can use it. If you’re writing your dissertation on the Bauhaus, you will hopefully find new and rich material. One hundred years later, the relevance of the Bauhaus remains undiminished.”