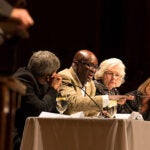 A wall is just a wall.

Unless it is a work of art hidden in plain sight.

That was the message of a lecture Tuesday at the Graduate School of Design — the first in “Then and Now,” a series on the legacy of the iconic architect Walter Gropius, courtesy of the Professor William Breger Fund. Gropius taught at Harvard from 1937 to 1952 and was credited with creating an American fervor for modern design. Introducing the lecture, Dean Mohsen Mostafavi said, “We want to use the series to make that history present.”

The messenger was Christopher E.G. Benfey, Ph.D. ’83, a professor at Mount Holyoke and a polymathic historian, memoirist, and literary critic. His focus: a floor-to-ceiling mosaic of yellow masonry brick called “America” (1950). In its Harkness Commons setting, the wall is little noticed despite its intricacy (inspired by the pre-Columbian Mitla ruins in Mexico) and its size (8 feet wide and 11 feet tall). To the casual viewer, Benfey said, it is nothing but “the backside of a fireplace.”

The wall’s designer was German-born American artist Josef Albers, a longtime Gropius friend from their days at the Bauhaus. The school, which opened in 1919, inspired a major current in architectural modernism. It was closed in 1933 by the rising Nazi regime, which saw its utopian, communal ethic as a threat to Germanic culture.

Both Gropius and Albers decamped to the United States: the architect to Harvard and the artist to Black Mountain College in North Carolina, an experimental, commune-like school (1933-1957) with more than a touch of Bauhaus to it. Albers put fine arts practice at the core of the curriculum. (“The Depression,” Benfey said, was “the last great era of progressive education,” a time of struggle that was mitigated by a sunny “aesthetic of newness.”)

Albers directed the painting program at Black Mountain until 1949. His wife, Anni, a fabric artist, was a colleague. Meanwhile, Gropius was eager for his friend to join him at GSD. But despite two decades of periodic teaching visits and a one-year appointment at Harvard in 1949-1950, Albers ended up at Yale.

Benfey, it turns out, was uniquely prepared to deliver “A Wall at Harvard,” a lecture about Josef and Anni Albers: They were his great-uncle and great-aunt, and he had recently written a related memoir on his family, “Red Brick, Black Mountain, White Clay” (2012). It is a dreamlike but exactly detailed rumination on the interweaving of objects, places, and personalities.

Albers was at first reluctant to accept Harvard’s wall commission. On the plus side, it was for Harkness Commons, a new complex (five dormitories and a graduate student center) cooperatively designed by his friends: Gropius and others at the Architects Collaborative. But on the minus, Albers had never built a wall — and was not an interior designer, much less an architect.

A series of concurrent inspirations and events won the day, said Benfey. For one, Albers had just left Black Mountain, where his last years were spent in a series of artistic experiments, leaving him more open to technique than ever.

In the heat of creativity, Albers was also poised to begin his famous series of abstract color experiments, “Homage to the Square.” Anni was in bloom too, in the midst of her landmark exhibit at the Museum of Modern Art — the first of its kind for a textile artist. Most of all, said Benfey, the creatively entwined couple (one observer called them a “two-person religious sect”) was still absorbing the lessons of color, art, and life they had derived from frequent visits to Mexico.

Their visits to the Mitla ruins, beginning alongside Diego Rivera in the 1930s, inspired Anni’s textile design — and also awakened a taste in Albers for intricate brickwork, where shadows from recessed pieces could be part of an artistic scheme. The artist took hundreds of photographs of ancient brickwork. Soon after, having absorbed Mexico’s lessons of riotous color, ziggurats of stone, and intimacy with nature, he was open to building a wall that was not just a wall.

Of the Harvard project, Albers later wrote, “I decided to make a real mural” — one that would revive the meaning of the word itself. (The Latin murus means “wall,” he pointed out.) As Benfey noted, Albers was critical of the murals of his day, dismissing some of them as “enlarged easel paintings.”

The Harvard work is called “America,” in part because of the stark sense of verticality it imparts, as if skyscrapers were jutting into the sky. “The composition represents growth, perhaps structural growth,” Albers wrote. Benfey, who had spent the day on an informal tour of Harvard architecture, compared the wall’s artful brickwork to the exterior of Sever Hall, a “utopia of brick,” he said, where H.H. Richardson strove “to escape the idea of uniform units deployed in a grid.”

Searching for the meaning of “America” today is complicated by the fact that the Albers creation of 1950 is barely seen. “I can’t emphasize enough,” said Benfey, “how invisible this work is in its current setting.”

He widened that thought to the fate of Harvard’s Bauhaus footprint, now almost 65 years old. In an era of bigger Harvard buildings, built in “a glorious boardroom, corporate style,” he said, “the whole Gropius complex feels like it’s been ingested.”

To the packed-in audience at Stubbins Room in Gund Hall — students, artists, architects, and historians — those were fighting words. “It’s time for us to look very closely,” said Lynette Roth of Harvard’s unseen artistic treasures — and that process has begun already. Roth is the Daimler-Benz Associate Curator at Harvard’s Busch-Reisinger Museum, a partner in the Harvard Art Museums, which has significant holdings by Anni Albers, as well as by Josef Albers.

At the end, Mostafavi spoke up with a wish: that 65 years ago Albers had joined Harvard instead of Yale, bringing with him an approach to learning that is all the rage again, not only at GSD: one that blends the cerebral world with the world of arts practice, twin pillars of thought and action that long ago characterized both Bauhaus and Black Mountain College.

Meanwhile, said Mostafavi of the new lecture series, inspiration is there to be had from Gropius, from the friends he had, and from the past he inhabited. A look back, he said, might encourage Harvard at large to embrace “a different kind of reflection.”