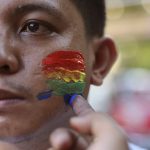 How to curb the madness

Early in the spring, first-year Harvard Law School (HLS) students Chloe Goodwin, Nora Ellingsen, and Josh Looney jumped at the opportunity to volunteer with a national organization to help felons get a second shot at life.

Working with Clemency Project 2014, a coalition that supports petitions by nonviolent drug offenders for executive clemency, the students wound up enlightened and inspired.

“It was a wake-up moment for me,” said Looney, who plans to pursue a career in criminal defense. “I realized that what I was doing was really different from writing a brief for class.”

With a group of 26 working under the supervision of pro bono attorneys from the Boston firms Goodwin Procter and Clements & Pineault, HLS provided the largest contingent of students among the law schools participating in the project.

“Our goal was to put a very concentrated effort on this work this semester so that the petitions would be reviewed by Obama before he leaves office,” said Kastner.

Students conducted phone interviews with inmates in Georgia, New Jersey, California, and other places to craft narratives to justify their clients’ pleas to have their sentences commuted, a key part of the clemency petition. All the inmates were low-level, nonviolent drug offenders sentenced to 20 years or more in prison.

The students also analyzed statutes and sentencing guidelines to show that their clients’ sentences would be lower under current laws. Kastner said that students’ work would allow the HLS group to submit 15 petitions to the Office of the Pardon Attorney through Clemency Project 2014.

During the Obama administration, more than 21,000 prisoners have submitted clemency petitions. Three hundred and forty-eight petitions have been granted, and more than 9,000 are pending. Despite the odds, the students hope for clemency for their clients.

Prisoners interviewed by HLS students were screened by volunteers with NYU Law’s Clemency Resource Center to make sure they met the criteria set by the Justice Department to apply for clemency. They had to have served 10 years or more in prison by the time they applied, shown good conduct, lacked any history of violence, and demonstrated that their sentences would be lower if they were convicted today.

For Ellingsen, who hopes to build a career as a prosecutor, the most rewarding part of the project was interacting with clients. “It was an opportunity to feel that one is doing something that is real and concrete that might make a difference,” she said.

Looney had a similar experience when he made a breakthrough after reviewing a client’s case using current federal sentencing drug laws. With help of some “junior math,” he was able to determine that a client would be sentenced to 12 years rather than life for the same crime today. Due to privacy issues, students are not allowed to discuss specific details about cases or clients.

But working on clemency can be frustrating as well as rewarding. For Goodwin, the hardest part was not knowing what happens after the petition is submitted.

“It’s like a black box,” she said. “People don’t hear back. It’s going to be challenging for our clients.”

Petitions undergo seven levels of review before the president sees them. Mark Osler, a former federal prosecutor who advocates for clemency and criminal justice reform, has criticized the process as sluggish and bureaucratic and has urged Obama to act on more petitions.

Osler, the Robert and Marion Short Distinguished Chair and Professor of Law at University of St. Thomas in Minneapolis, came to Boston in January to train volunteer lawyers with the Boston firms.

HLS students used handouts prepared by Osler that included a step-by-step guide to clemency petitions. In the process, they learned about clemency and the role it plays to remedy injustices in criminal law.

Looney, who plans to intern at the Metropolitan Public Defender’s Office in Portland, Ore., this summer, was baffled when he learned of the complexity of the clemency process, but he was also struck by the possibility of helping a prisoner regain his freedom.

“We really have the chance of impacting someone’s life, even though we don’t know what that chance is,” he said. “It was sobering but mostly exciting to realize what we can do with our legal education.”