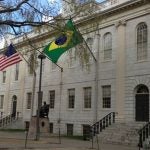 Celebrating a decade in São Paulo

The Supreme Court issued a historic decision Monday, weighing in again in the nation’s fractious abortion debate. In a 5-3 ruling, the court overturned a Texas law requiring that abortion clinics maintain hospital-like standards at their facilities as well as admitting privileges at local hospitals.

Pro-life activists argued that the rules were aimed at protecting women’s health, but those in the pro-choice camp countered that the law left many abortion clinics with no choice but to shut down and infringed on women’s constitutional rights. The court agreed. “Neither of these provisions offers medical benefits sufficient to justify the burdens upon access that each imposes,” wrote Associate Justice Stephen Breyer in his majority opinion.

Harvard Law School’s I. Glenn Cohen, a professor of law and faculty director at the School’s Petrie-Flom Center for Health Law Policy, Biotechnology & Bioethics, spoke with the Gazette about the ruling. Cohen filed an amicus brief in support of the court’s decision.

GAZETTE: What exactly did this ruling say?

COHEN: It declared unconstitutional a Texas law that targeted abortion providers. These “targeted regulation of abortion provider,” or TRAP, statutes are popular across the country. This one had two main provisions. First, the admitting privileges requirement provides that physicians performing or inducing an abortion must have active admitting privileges at a hospital within 30 miles of the abortion facility. And second, the surgical-center requirement requires abortion facilities to meet the minimum standards for ambulatory surgical centers under Texas law.

GAZETTE: Can you set the historic precedence for this vote? How does it compare to Roe v. Wade and, more recently, Planned Parenthood v. Casey?

COHEN: This is the strongest blow to the abortion restriction agenda since Planned Parenthood v. Casey, in 1992, in which the Court upheld the right to have an abortion, but also applied a new legal standard — the “undue burden” standard — to restrictions on abortion access. After a series of losses over the last few years on partial birth abortion and other cases for the pro-choice camp, this was an important win. As I noted on my blog, it will make it easier to challenge these kinds of restrictions because of three elements of the way the court interpreted its prior ruling in Casey.

First, the Court signaled that much less deference is due to legislatures than has been true in prior cases. Second, the ruling clarifies what constitutes an “undue burden” — the standard established in Casey — instructing lower courts to balance the burdens a law imposes on abortion access against the benefits the restrictions supposedly confer. Finally, it clarifies the “large fraction” language from Casey, rejecting the lower court’s more restrictive view as to how many women in Texas had to be negatively affected to make the law unconstitutional.

GAZETTE: Similar versions of this law exist in numerous other states. How will this decision affect those states going forward?

COHEN: While the specifics matter (much of this case was about how good the evidence was that these laws would have the effect of shutting down abortion clinics and to what extent), such that one cannot make a prediction as to any state without knowing the specifics, this much is clear: Those opposed to such laws will have a much easier time challenging them after this opinion than before it.

GAZETTE: You wrote on your blog that the language in this decision was much different from that of the gay marriage cases, and that all of the opinions, with the exception of Justice [Ruth Bader] Ginsburg’s, are in the “technocratic mode of writing.” Is that significant?

COHEN: I don’t know that I can do it better than in my blog’s words so here is a recap of that post:

All the opinions, except perhaps Justice Ginsburg’s very short concurrence, are decidedly in the “technocratic” mode of writing as opposed to what we might call the Kulturkampf (i.e., a deep conflict between cultures, civilizations, or value systems) mode that characterized much of Justice [Antonin] Scalia’s dissents on these kinds of issues. These opinions are written for lawyers, not the public. I would have to do a proper count to be sure, but it seems to me that something like two-thirds to three-quarters of the total pages of these sets of opinions are devoted to issues that only lawyers will be able to engage in.

‘This feels so different than the other social policy decisions the court has weighed in on in the past and even this term.’

The emotional dial of these opinions is turned largely to the sleepy end. While Justice [Clarence] Thomas, in particular, frequently writes in his opinion that the court is inventing special rules for abortion cases, the typical reader would not feel the passionate disagreement about abortion come out at all in these opinions. Instead, they seem much more to be the kinds of things you would find in civil procedure and federal courts textbooks — a high level of lawyerly back and forth. This feels so different than the other social policy decisions the court has weighed in on in the past and even this term.

What explains the turn to the technocratic abortion opinions? Authorship may have something to do with it. Justice Breyer writes more commonly in this style than the other left-leaning justices. Also, Justice Scalia’s absence is felt, for one could have imagined the kind of no-holds-barred and pungent dissent he might have written. Ultimately, though, I suspect that this has much to do with the court trying to manage the political realities of this election cycle and the likelihood of remaining only eight for a time to come. One can sense the court feeling the need to stay above the fray a bit more in these times of so much partisan rancor.

GAZETTE: Were you surprised that Justice [Anthony] Kennedy sided with the majority, given his support for the ban on partial-birth abortions in 2007?

COHEN: With Kennedy you never know. At oral argument he asked hard questions of both sides. This term, in Fisher, for the first time ever he sided to uphold an affirmative-action program, so it shows he looks at every case anew. I do think his prior partial-birth abortion decision had a very distinct hue to it, with a kind of woman-protective argument that many found problematic, so maybe that reaction influenced him here.

GAZETTE: Do you think that it’s significant that even with the court missing a justice, it ruled in a liberal direction? Even though the vote was 5-3, do you think Scalia’s presence on the Court could have made a difference in this decision?

COHEN: Well, numerically speaking he would not have swayed the vote. I think the biggest difference would be in the tone of the dissenting opinion. Scalia, who was an excellent writer, also had much more of a poison pen. I also think the themes of Kulturkampf one saw in his gay-rights decisions (especially the gay marriage decision, Obergefell v. Hodges) would have expressed themselves much more if he was writing. Justice [Samuel] Alito’s dissent and even Justice Thomas’ opinion are more low-key and more dry, technical, lawyerly than Scalia would likely have written. For some, that makes these opinions better, but for the average member of the public a blistering Scalia dissent would probably have been better to stir the passions of those who are in favor of these restrictions on abortion.