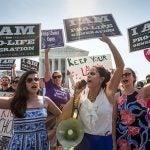 Thirteen years after the historic ruling, Julie Goodridge reflects on her landmark case

Before the innocent observation of their four-year-old daughter, Annie, Julie Goodridge, Ed.M. ’83, and her then-partner Hillary were pretty comfortable with their relationship status. But after reading a book about people who loved each other, Annie made her own list, writing down all the people she knew who loved each other. Not on the list? Her mothers. “You can’t love each other,” Annie explained to Hillary. “You’re not married.”

“We’d had a commitment ceremony in the backyard; that seemed fine for us,” says Goodridge. “But we weren’t married, and we started to think about what that meant.”

So began the fight that would become Goodridge v. Dept. of Public Health, the landmark case that would see same-sex marriage become legal in the commonwealth of Massachusetts in 2003. As one of seven couples involved in the case — and the lead plaintiff — the Goodridges became the public faces of the marriage equality movement. This new role for the family was sometimes difficult on Annie, who found herself having to defend her family to some classmates, and on her mothers, who now had the added responsibility of educating the educators at Annie’s school.

“I had to play the role of ambassador for gays everywhere,” says Julie who, with Hillary, worked to mobilize the gay community at the school — parents and teachers — to make things easier for their children.

Thirteen years after the historic ruling, Julie Goodridge returned to the Harvard Graduate School of Education to participate in last semester’s Askwith Forum, With This Ring: Winning Marriage Equality. In this edition of the Harvard EdCast, she speaks about her role in the same-sex marriage movement, and reflects on her time at HGSE.

Julie Goodridge, lead plaintiff in the landmark Massachusetts case Goodridge v. Dept. of Public Health, reflects on her life’s journey and discussed her time at HGSE.