After Brexit, a changed future 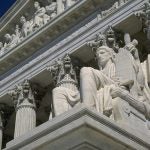 Following the initial shock from the referendum on Thursday in which Great Britain voted to leave the European Union, Harvard analysts worked to grasp the unfolding impact of the momentous decision on the United Kingdom, Europe, and the world, and they looked toward a changed future.

“Britain was always a reluctant member of the EU, but it will continue to prosper,” predicted Peter Hall, Krupp Foundation Professor of European Studies, by phone from London, where he has been throughout the referendum campaign. “As for the future of the European Union, nobody knows. European themselves don’t know.”

The departure sanctioned by British voters — 52 percent opting to leave and 48 percent to remain — will mean the EU has 27 member states, which will continue to operate as a single market with free movement of people, capital, and goods. But Britain’s exit will shift the balance of power among those nations, and is likely to spawn withdrawal movements in some other EU countries.

After Germany, Britain has the union’s second-largest economy, and although the financial impact on the EU remains to be seen, the political implications seem clearer. The Brexit vote took place against a backdrop of economic and migration crises that continue to rattle the continent and to fuel skepticism about EU policies.

“The vote is damaging to the EU,” said Hall. “It will intensify the need that European leaders must already feel to find a new purpose, a new mission.”

The Brexit vote reflects a divorce between the union and sizable segments of the European electorate, said Maya Jasanoff, Coolidge Professor of History and Harvard College Professor.

“What the vote also shows is the gap between the central role that the EU plays in integrating European economies and other aspects of their political and civic lives and the popular understanding and commitment to the European project,” she said. “European leaders have failed to communicate the rationale for political integration to the electorate of the member states. The case of political integration has not been effectively made.”

The vote also revealed a polarized Britain, with deep divisions rooted in values and economic status, a phenomenon that bears some resemblance to the political climate in the United States, said Hall.

“London supported to ‘remain’ while many parts of the countryside voted to ‘leave,’ ” said Hall. “Large segments of the population feel left out of the prosperity associated with globalization and the EU, while others, especially in London, benefit from integration into an open global economy and are outward-looking.”

Other divisions were on display across the United Kingdom. Scotland and Northern Ireland voted strongly in favor of remaining in the European Union, but were outvoted by England, where most of the electorate lives. In the wake of the Brexit vote, Scottish First Minister Nicola Sturgeon said that a second Scottish independence vote is likely.

If Northern Ireland, whose economy has blossomed in part because of its open borders with Ireland, a devoted EU member, were also to seek independence, the United Kingdom could become a shell of itself, Hall said.

In such a scenario, “Cameron will be considered the worst prime minister in the history of the United Kingdom,” he said.

For now, European leaders face the task of dealing with the mounting pressure to solve the refugee crisis that was a driving force behind the emotional Brexit campaign.

“Euro-skeptical parties on the radical right and left of the political spectrum have been encouraged by the British vote to demand similar referenda in their own countries,” Hall said. “But mainstream political leaders are anxious to prevent this. They can only do so if they retain power, and that will be their first priority.  They can only do so if they can revive economic growth in Europe and limit the backlash against immigration. That will be very difficult to do.”