Teachings from the televangelist 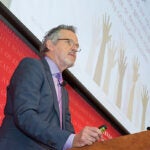 He’s a man of the cloth, but he knows his best camera angles as well as he does his Scripture.

Former Pentecostal televangelist Carlton Pearson visited Harvard recently to announce his donation to the Andover-Harvard Theological Library of his personal archives, which include thousands of hours of raw and produced footage to give researchers insight into the craft of religious broadcasting.

“This is like interring my previous person in a mausoleum for it to be preserved and memorialized and archived for perpetuity,” he said of the footage.

Because of its historic and cultural value, the gift from Pearson, who lives in Tulsa, Okla., represents a significant contribution to library collections. Pearson, who studied at Oral Roberts University and worked as a bishop in Tulsa, broke with his church in 2005 after preaching what he called the “gospel of inclusion,” which deviated from traditional Pentecostal ideas. He promoted, instead, beliefs that salvation is not dependent on Pentecostal experience, that hell does not necessarily exist, and that Christianity is not the only path to heaven.

The impact of his shift in belief was seismic. Fellow bishops labeled him a heretic, and his parish of thousands dwindled to dozens. But Pearson said he has emerged from the past decade a changed man.

“When I lost the ministry, I had to actually pack up my stuff,” he said.

That’s when he found time to watch and reflect upon just a small part of his 40-year career. The archive spans his fire-and-brimstone years, beginning when he first went on the air in 1977 with a high-octane televangelism. That footage revived complex memories for him.

“It was like looking at a corpse in a coffin of who I used to be. When you have your whole life’s work in plastic crates wrapped up in storage, it’s like you died,” he said. “The attachment and detachment were both simultaneously very difficult.”

Pearson kept the archive in deep storage, but it came to light when Jonathan Walton, now Plummer Professor of Christian Morals and Pusey Minister in the Memorial Church in the Faculty of Arts and Sciences and professor of religion and society at Harvard Divinity School, went to Tulsa to study how narratives are crafted in religious broadcast. Pearson’s material was so comprehensive and detailed — raw footage from each produced broadcast, financial records, advertising, and even White House correspondence — that Walton immediately recognized an invaluable resource.

“Nobody can tell a story about religion in America in the second half of the 20th century without talking about religious broadcasters,” said Walton. “They’ve gone from marginal characters to swearing in presidents.”

Religious leaders began utilizing the power of television soon after the medium took off in the 1950s, seizing the opportunity to place the pulpit in parishioners’ living rooms. The industry boomed, and compelling figures such as Oral Roberts and Jim Bakker gained wide followings. Pearson regularly hosted prominent religious leaders on his programs and had an active civic life.

“If a picture is worth 1,000 words, these preachers understand that a 20-minute sermon block is worth infinite meaning, and they’re very careful about how they seek to construct that,” Walton explained.

When students and researchers come to Harvard, they now will be able to compare and contrast, not just from their fieldwork but from Pearson’s unedited masters, figuring out how narratives about gender, race, and religious fervor are shaped in the editing process.

“It’s one thing to be in a service with them and actually see what happens, and it’s another to get the hyper-produced version that’s then marketed and sold,” said Marla Frederick, professor of African and African American Studies and of Religion, whose work also focuses on the intersections of religion, race, gender, media, politics, and economics.

In June, Pearson’s archive will arrive on campus to be cataloged and eventually digitized.

The 63-year-old Pearson said the gift reflects his way of still spreading and nurturing feelings of faith.

“Connecting to Harvard is an answer to the command of everywhere,” he said, referencing Christianity’s Great Commission, “because people can online access this from Germany, from Switzerland, from Australia. It really is everywhere.”