Losing the war on jihadism 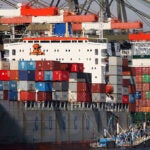 While in recent months the United States and its allies have had some battlefield success against the self-described Islamic State, or ISIS, the allies still are losing the war against Islamic jihadism, say two former directors of the American and Israeli intelligence agencies.

“I believe that my children’s generation and my grandchildren’s generation will still be fighting this war,” said Michael Morell, acting director of the Central Intelligence Agency (CIA) from 2012 to 2013 and its deputy director from 2010 to 2013, during a discussion Tuesday evening at Harvard Kennedy School (HKS).

Although the Islamic State has lost territory in Syria and Iraq and its finances and leadership structure have been greatly diminished of late, the sophisticated nature and accelerated pace of its attacks in Europe — six in the last six months — and the rapid spread of its ideology into 25 countries and 30 militant groups that claim affiliation with the group indicates that the fight is nowhere near over, said Morell, now a senior fellow at Harvard’s Belfer Center for Science and International Affairs.

“We are in some kind of Third World War,” said Tamir Pardo, a career intelligence agent who headed the Mossad until his retirement in January. Even if Syrian President Bashar al-Assad left power, the war in Syria would continue and become “much worse” unless the deeply rooted socioeconomic troubles in the region that fuel extremist ideology — such as a lack of education, food, and health care — are addressed, he said. It’s a monumental challenge that would cost hundreds of billions of dollars, a price tag no country appears willing to pay.

Three dynamics at work in the Middle East have led to the current crisis, said Morell: the rise of Islamic extremism, a distorted, quasi-religious movement that sees the West as its mortal enemy and promotes an apocalyptic world view; the failure of every government in the region except the United Arab Emirates and Israel to take on the political, economic, and social policy issues involved; and the tension between what he labels “Iran’s pursuit of regional domination and the Sunni Arab states’ pushback against that.”

Unless the West deals with all of these realities, a threat even more dangerous than the Islamic State will arise, he said.

Morell rejected the notion that if the United States had simply left Iraqi leader Saddam Hussein in power 15 years ago, the Middle East would be far more stable today.

“The mistake in Iraq was not so much the removal of Saddam … [it] was the de-Baathification decisions that destroyed the Iraqi military,” the Iraqi security services, and Iraqi intelligence services, he said. Those actions created a vacuum that was filled by al-Qaida and other insurgents.

Both speakers said that diluting the impressive power and reach of the Islamic State’s social media campaign or effectively countering its extremist narrative will remain a tough task given the West’s lack of credibility in the region, the elusive nature of cyber communications, and the sophistication of the group’s productions.

“I actually watched one of their videos a few weeks ago, and I found it compelling,” Morell confessed.

But curbing the freedoms of ordinary citizens or employing mass surveillance online to stop the spread of the Islamic State’s message is not the answer, said Pardo.

“We have to preserve our democracy and be ready even to pay quite a high price for that,” he said. “I think it’s better to suffer from their ‘behavior’ than to ruin our own society and the things that we believe in.”

Asked by Belfer Center director Graham Allison whether Israel should feel safer now than it did during the Arab Spring uprising five years ago, Pardo said there’s no connection between ISIS and the Palestinian stalemate. He does not fear invasion by ISIS, al-Qaida, or al-Nusra Front, but there are warning signs that those movements are “a threat from the inside.”

Both Pardo and Morell agreed that a two-state solution to the Israeli-Palestinian standoff is the “right” one, but they worry that so much time has gone by and so many past offers have been taken off the table that a deal may no longer be possible.

On Iran, an Israeli foe, Pardo called the nuclear deal there a historic, strategic turning point for the region, but he said he’s not confident that Iran will live up to all of its requirements, and he worries that the West will be too distracted by terrorism or other issues to punish transgressions.

“I’m not sure they will not try to do something stupid in the coming years,” he said, adding the deal’s one “mistake” was to allow Iran to continue its military aid of Houthi rebels in Yemen and to the Hezbollah. Although the deal covering nuclear activity does not specifically address such actions, Secretary of State John Kerry warned Iran last month that the United States “will not stand by” efforts to destabilize the region further.

While Morell also likes the deal, he’d like to see far more pressure put on Iran for its support of terrorist groups and regional insurgents and other problematic behavior.

Asked if intelligence efforts are affected by the recent chaotic state of U.S. national politics, Morell said he no longer tells people that terrorism is what keeps him awake at night since he’s left the CIA.

“The answer I now give is the failure of our political system here in the United States to make the kind of decisions that we need to move our economy and society forward — not to stop terrorism. And the reason that scares me so much is the most important determinant of a country’s national security is the health of its economy and the health of its society,” he said.

Panelists Tamir Pardo, former Director of the Mossad, and Michael Morell, former Director of the Central Intelligence Agency, joined moderator Graham Allison, Director of the Belfer Center for Science and International Affairs for a discussion on the global threat posed by Islamic extremist groups. The panelists discussed the evolving presence of the Islamic State in the Middle East as well as U.S. and Israeli efforts to mitigate the spread of ISIS.