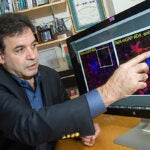 Motor cortex is critical to learn new skills, but may not be needed to perform them, study says

When he set out to understand how the motor cortex changes with learning, Bence Ölveczky, the John L. Loeb Associate Professor of the Natural Sciences, assumed, like nearly all other scientists, that unique learned motor behaviors originate in the motor cortex.

What he found, however, was the opposite.

To their surprise, Ölveczky and his colleagues learned that while the brain’s motor cortex is critically important for learning new skills, those skills, once learned, can be executed without any input from the motor cortex. The study is described in a paper published today in the journal Neuron.

“The thinking has always been that the more primitive subcortical circuits are there to support innate, instinctive behaviors, while sophisticated, learned behaviors require the motor cortex,” Ölveczky said. “Our assumption was that … when you perform a learned skill you sequence or coordinate it from the motor cortex. But in our experiments we found that even if the motor cortex was missing, there was no effect on complex learned motor sequences, so we have to conclude that subcortical circuits have the capacity to store and execute them.”

For many creatures, the ability to learn unique motor behaviors is a crucial adaptation. That’s what allows humans to walk and talk, songbirds to sing, and predators to outsmart their prey. Virtually all of these behaviors are learned the same way, through trial and error.

“Essentially, you learn something by varying different aspects of your behavior and learning what works and what doesn’t,” Ölveczky explained. “With time and much practice, the nervous system can select the actions that lead to good outcomes.”

As an example, Ölveczky pointed to tennis players. While beginners often show large variation in their serves, the motions of experienced players are nearly identical from one serve to the next.

To better understand the role that the motor cortex plays in the mastery of such skills, Ölveczky and his colleagues developed a simple task that rewarded rats for pressing a lever, and then pressing it again 700 milliseconds later.

Just as in any other trial-and-error learning scenario, the rats were initially rewarded for a wide range of lever presses. Over time, the contingency for success narrowed until only lever presses that were exactly 700 milliseconds apart were rewarded. Eventually, over 10,000 to 15,000 trials, each of the dozen rats in the experiment learned motor sequences equal to the task.

Just as each player’s serve in tennis is different, the rats solved the task in idiosyncratic ways, using precise sequences of seemingly arbitrary actions — from scratching the wall to a motion similar to a DJ spinning a record — to stick to the proper timing between lever presses.

Two rats that have learned the timed lever-pressing task are seen performing it before and after lesions to the motor cortex. To the left are two examples taken before the lesion; on the right are two examples from the first day of training after the lesion. Note the stereotyped idiosyncratic behaviors and how they are not affected by motor cortex lesions. Videos are slowed down by a factor of 2.5.  Courtesy of Bence Ölveczky

“I assume that they didn’t know it was an interval timing task, but through trial and error the rats learned that if they produce a particular sequence of movements they will get a nice big drop of water,” Ölveczky said. “And, importantly, once they have this figured out, the behavior is very stable and it’s very hard to change because they would be changing from something that works.”

When Ölveczky and colleagues lesioned the rats’ motor cortices and returned them to the experiment, they were surprised to find that the rats were able to complete the task just as they had earlier, using exactly the same movements.

“We were very puzzled, since we all thought that these learned behaviors should require the motor cortex,” Ölveczky said. “So we thought, what have we been missing?”

“If you lesion the motor cortex in those cases, performance is affected, often quite severely,” Ölveczky said. “In many mammals, including humans, we need the motor cortex to produce fine dexterous movements and skills.

“The problem was that many people, including us, were generalizing from these studies, leaving us convinced that the motor cortex is important for all kinds of skills.” he continued. “But no. It’s not that the motor cortex is necessary for executing learned motor sequences, per se. It’s important for dexterity, but that’s a different aspect of motor skill than the one we were interested in.”

While the evidence suggested that the motor cortex is not necessary to perform the learned behaviors, Ölveczky and his colleagues set out to test whether it was needed to learn them in the first place by lesioning rats’ motor cortices before exposing them to the task.

“Initially, they were no different than the other rats,” Ölveczky said. “They pressed the lever the same, they had the same sort of movements, but lesioned rats never got there. We kept training them for many months, but their variability remained high. They never learned the task.

While the study sheds new light on the role of the motor cortex in learning and performing motor skills, it also serves to highlight the previously unrecognized power of subcortical motor circuits, Ölveczky said.

“Lizards and other non-mammals are all capable of extraordinary motor feats, but none of them have a cortex,” Ölveczky said. “One way of thinking about this is that when mammals evolved a cortex, there was already a very impressive motor infrastructure in place, one that had been refined over millions and millions of years. But it was adapted for specific scenarios and lacked flexibility.

“To increase the flexibility of the animal’s behavior and allow it to learn new skills, the cortex had basically two options. It could integrate itself into what was already there, or it could reinvent everything and take full control over the animal’s movements. Our results suggest that the cortex was smart and found ways to use the subcortical motor controllers to its advantage. There are now pathways in the brain that allow the motor cortex to influence and reprogram subcortical circuits to increase their utility and flexibility. Offloading the execution of stereotyped motor behaviors to these lower-level circuits frees up the motor cortex to do more sophisticated things.”