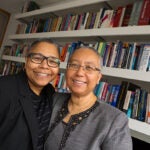 An extracurricular whirlwind, Jesus Moran ’16 plans to give back as a teacher

Cross a social butterfly with a worker bee, and you’ve got Jesus Moran.

Outgoing, busy, but not flighty, the College senior has been deeply dedicated to so many extracurricular activities (among others: Ghungroo, an annual celebration of South Asian culture and the largest student-run production on campus; Concilio Latino, a cultural and social awareness group; Eliot House Committee; an internship with the University’s Public Schools Partnerships team) that even those close to him wonder how he has time to sleep.

“He’s always the first to show up and the last person to leave,” said Eliot House blockmate Dipti Jasrasaria ’16. “In the context of what he wants to do in the future — education and social justice — it’s really fitting that he helps people reach their full potential, whether that’s students or one of us.”

Perhaps being a twin drove Moran’s love of being part of a team. But his dive into leadership at Harvard came from a “slingshot moment of loneliness” at the beginning of his freshman year — his first time, he recalled, truly being on his own. Moran decided to challenge himself to meet new people, and to try new things as often as possible.

“I found a good group of people whom I enjoyed the company of, some who look like me, some who come from similar backgrounds, and some who don’t, and that just got me excited and pumped to get to know this whole new world of a variety of people, kind of like a melting pot put onto one campus, just learning and growing from each other,” he said.

In dancing, he found one of his most unexpected roles. Moran, who is a government concentrator, had never danced in public, but found himself onstage performing South Asian dances during his freshman year in Ghungroo. He co-directed it twice after, jokingly referring to it as his version of a senior thesis.

Other roles were more in line with his natural aptitudes. As co-chair of his House, he worked tirelessly to create an inclusive environment among his peers.

“He’s definitely one of the people who make Eliot Eliot,” said House tutor Heather Felix, whose 2-year-old son, Riley, will only allow Moran, of all the House’s resident undergrads, to pick him up and take him on adventures around the House. “He’s one of those people who really dive in and add to the community.”

Unlike many college seniors, Jesus is already prepared to spend more time in the classroom. In the fall, as part of the first cohort of the Harvard Teacher Fellows (HTF) program, he will join an urban high school in California’s Bay Area to teach world history.

“What I saw in Jesus as both a candidate and a student is someone who can be unbelievably warm, having a sense of vision of the type of classroom he wants,” said Eric Shed, lecturer on education and director of the HTF program.

Beyond the teaching fellow’s academic curriculum, the 22-year-old will bring personal perspective on what a college experience means, and sees the work as a way to pay forward the faith his teachers placed in him when he was in high school.

“I didn’t see myself being in a place like [Harvard], but teachers saw that in me, and I’m going to be seeing a lot of that in my students as well,” he said.

The 68 percent dropout rate at his high school in Southern California could have been the reason Moran didn’t initially consider an Ivy League school. He credited the unwavering encouragement of his parents, who emigrated from El Salvador as teenagers, and the support from an intensive, seven-year pre-college enrichment program, with enabling him to make the leap. The work ethic he learned during those early years still drives his spirit.

“It’s a feeling of accomplishment after you’ve done something you spent so much time with, and you’ve seen it through. All you want to do is collapse, but you also feel like, ‘Wow! We just did that,’” Moran said. “That feeling is just such a satisfying moment of being done, but also like, ‘What’s next?’”

Which, incidentally, is also an apt description of graduation from Harvard College.