The spectacle of Ghungroo 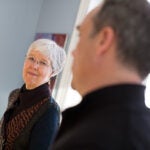 Backstage at the Agassiz Theatre’s Horner Room, costumed performers gathered for last-minute rehearsals. One group of dancers sang their own soundtrack, as another followed a faint beat from laptop speakers. A performer whipped out a neon vest, and his squad, clad in gold spandex, followed him into the room. In one corner, a flutist practiced; in another, a host’s turquoise dress was wrapped slowly around her. Two masters of ceremonies practiced their routine. “It’s three hours of overly done clichés about South Asia,” one quipped. “Well, when you put it that way, this is a Bollywood movie,” shouted the other.

The scenes on Thursday were from the opening night of Ghungroo, a celebration of South Asian dance, music, and heritage — and the largest student-run production on campus.

For audience members, Ghungroo means flashing colors and a soundtrack that integrates the stylings of Bhangra with Rihanna. But with 400 undergraduates involved, the performances, which ran through Saturday, also are a tremendous feat of coordination. Ghungroo is the only show on campus too big for the building in which it is held — only 110 performers fit in the Horner Room — so a flurry of coordinators with microphones must shepherd groups from holding area to holding area as they prepare to take the stage.

Across the street in the basement of the First Church in Cambridge, performers in later acts arrived, changed, and warmed up. There, Vinay Iyengar ’18 had set up a live feed from the theater to coordinate when the next mass of dancers should be shepherded across Mason Street to Agassiz. “It’s sort of like a conveyer belt from here to the two rooms inside the Ag,” he said, both harried and exhilarated by the buzzing microphone and the green-gold costumes flying by.

The coordination begins long before opening night. The South Asian Association books the theater, paints the set, recruits choreographers, assembles programs, auditions and orders the acts. This year, with 300 applications, the association selected 150 dancers to appear in everything from “Dandiya Raas,” a folk dance from Gujarat, India, to “Fusion,” which the program bills as “Chicken Tikka Masala — not quite purely found in South Asia, but a sumptuous meal that leaves you ready for more.”

If there’s one thing in the cultural mix that defines Ghungroo, it’s the senior dance. A rite of passage for some, a bucket-list item for most, the number lasts for 25 minutes. It includes nine sections and 140 participants, many of whom have never danced before in college productions, and even more of whom have never studied the South Asian-inspired stylings featured in Ghungroo. The only qualifications are zeal and proficiency with online sign-ups.

“We’re not technique-oriented,” explained Radhika Rastogi ’15, the dance director. “We’re not out to impress the audience. It’s always more about energy and enthusiasm.” Her main concern ― moving dancers on- and offstage without anyone falling from the platform — did nothing to displace her joyous grin. Indeed, it was hard to spot a single case of backstage nerves in any of the holding areas. Ghungroo, a choreographer said, is a performance for performers, not the audience, and the euphoria of that shows.

Audience members are not left behind, though, particularly when it comes to seniors. Opening night is also “senior night,” and a section of Agassiz was reserved for the Class of 2015. It was wasted effort, though. Seating and tickets became increasingly flexible as the night progressed. At first, a few performers lurked behind the balcony seats to watch their friends. By the end of the night, a constant stream of seniors and dancers surged in and out to catch their roommates and friends in action. A venue manager recounted how last year she had barred 12 seniors sneaking in, only to catch them trying to sprint up the stairs when she looked away. She gave up when they slipped in a third time.

Back in the Horner Room, the energy of the senior dance was picking up, the conveyer belt running full-throttle. Sets of jingling dancers returned from the stage, squealing delightedly, just as new groups arrived from the church. Underclassmen had to depart at this point; there simply was not enough room for everyone. Someone peeked in to blow his friend a kiss. A student in athletic shorts followed; after a workout, he’d arrived two hours late to catch the last 15 minutes of the show. “This is what I came here for,” someone said. “This is the most important part of my night.”

Two leaders stood on a riser with signs hushing the backstage performers and announcing the next section to go on, but their written words carried little conviction. Venue managers had joined the whooping seniors in the balcony, and the strict coordination deteriorated as the night came to a close. After three hours of manning the conveyer belt, the directors were ready for flashing colors and Bhangra-Rihanna. They need not have worried; no one seemed to be falling off the stage.

Colton Valentine ’16 is a literature concentrator.