Ensler puts her life on stage 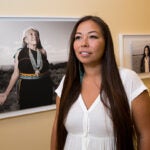 Playwright and activist returns to the A.R.T.

Eve Ensler returns to the American Repertory Theater (A.R.T.) this month with a deeply personal, one-woman show that tells how her work with women brutalized by sexual violence in the Democratic Republic of the Congo helped her overcome stage IV uterine cancer.

Her diagnosis in 2010 while working in the Congo threw her “into the center of my own body’s crisis,” Ensler wrote in her 2013 memoir, “In the Body of the World.”

“The Congo threw me deep into the crisis of the world, and these two experiences merged as I faced the disease and what I felt sure was the beginning of the end.”

But the then-57-year-old playwright, actor, and activist survived, and thrived.

Now she’s bringing her experience to the A.R.T. stage in the world-premiere adaptation of her memoir, directed by Diane Paulus. The play runs through May 29.

Ensler is perhaps best known for her one-woman play “The Vagina Monologues” (1994), which helped her develop V-Day, founded in 1998 to end violence against women and girls. V-Day in turn funded City of Joy, a community for female survivors of sexual violence in the Democratic Republic of the Congo. Ensler was diagnosed with cancer a year before City of Joy opened. She turned to the women she was helping for support.

“I am particularly grateful for the women of the Congo whose strength, beauty, and joy in the midst of horror insisted I rise above my self-pity,” Ensler writes.

The two first connected in New York in 2013 during the A.R.T.’s run of the musical “Pippin” on Broadway. Ensler came to see the show and the two “connected personally, theatrically,” said Paulus. Soon after, Ensler was in Paulus’ Cambridge office, where they discussed making the A.R.T. Ensler’s artistic home. The collaboration kicked off in December 2014 with “O.P.C.,” Ensler’s comedy about a young dumpster-diving freegan and her struggles to come to terms with society’s consumerism, consumption, and waste.

Paulus was eager to bring Ensler’s memoir to the stage.

“[It] knocked me out when I read it,” Paulus said. “I just thought it was some of her best writing ever and I immediately asked her if we could commission a stage adaptation of it and happily, she agreed.”

Paulus said the new show combines Ensler’s work helping women around the globe with her own journey toward healing and hope.

“It’s everything you can expect from Eve, all her passion and commitment to the injustice in the world, but kind of channeled through this personal crisis she went through with cancer,” said Paulus. “What’s so uplifting about the piece is she really looks at her experience with cancer as kind of a conversion moment. And she does it through her signature wit and humor.”

Paulus said Ensler’s story also factors into the set design, and that audiences will see a “pretty big theatrical gesture at the end of the show.”

Harvard Dance Director Jill Johnson choreographed the show, and each performance will be followed by discussions with activists and experts from the Harvard community and beyond.

For ticket and performance information, visit the A.R.T.’s website.