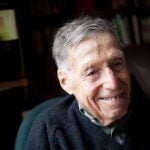 Professor of psychology has done extensive research on mindfulness

Social psychologist Ellen Langer, professor of psychology, is one of four Genius Award recipients being honored by Liberty Science Center. The organization is hosting its fifth annual Genius Gala in Jersey City, N.J., on May 20. Also being honored is renowned artist and architect Frank Gehry, who recently received the Harvard Arts Medal.

The first female professor to gain tenure in Harvard’s Psychology Department, Langer is known for her work in areas such as mindfulness, the mind-body connection, the illusion of control, aging, stress, decision-making, and health. Among other honors, she is the recipient of a Guggenheim Fellowship and three Distinguished Scientist Awards, the World Congress Award, and the Staats Award for Unifying Psychology.

“Our four 2016 Genius Award winners are singularly brilliant men and women,” said Paul Hoffman, president and CEO of Liberty Science Center. “These out-of-the-box geniuses deserve to be honored in an out-of-the-box way.”

The other 2016 Genius Award recipients are paleontologist Jack Horner, curator of paleontology at the Museum of the Rockies and Regents Professor of Paleontology at Montana State University, and astrophysicist Kip Thorne, cofounder of the Laser Interferometer Gravitational-Wave Observatory (LIGO) Project, which made the first direct observation of gravitational waves.