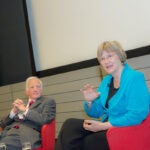 Political psychologist explores gap between public views and those of economists

One look at remarks from the presidential candidates and it’s clear that their attitudes on trade deals are less than favorable.

Donald Trump argues that foreign trade agreements increase corporate wealth at the expense of the blue-collar worker. Bernie Sanders’ website states that multinational corporations “have benefited greatly while millions of American jobs have been shipped overseas.” Even Hillary Clinton has retuned her message on trade in recent weeks, backing away from previous support for the multilateral trade deal known as the Trans-Pacific Partnership.

Those stances, pundits and politicians argue, reflect voter attitudes. But just exactly how have those attitudes taken shape? According to research by political psychologist Diana C. Mutz, Americans’ views on trade are connected to their sense of compatriotism and a strong “us-versus-them” mentality.

In analyzing results of a national survey, Mutz and her colleagues found that views on trade were less affected by party affiliation and job security than you might expect. Instead, she said, “very consistently, measures of domestic racism predict trade preferences. Higher prejudice levels are linked to anti-trade views.”

Mutz, a professor at the University of Pennsylvania and a current Guggenheim Fellow, presented her research Tuesday at the Radcliffe Institute for Advanced Study’s Kim and Judy Davis Dean’s Lecture in the Social Sciences. The talk was the first in a new series that will bring scholars and experts to Radcliffe to discuss topics across the arts and sciences.

While the vast majority of economists think trade is a win both for the United States and its partners, Americans overwhelmingly see it as harmful at home but beneficial to other countries.

Predictably, most Americans favored the policy that benefited the United States over the trading partner. What was surprising, Mutz said, was the finding that “no amount of trading-partner gain will compel Americans to support trade in the absence of the gains for the U.S. itself.”

“The bottom line from this first finding,” she added, “is that putting Americans first is a highly acceptable form of in group favoritism.”

Additionally, Mutz found that the tendency to see trade as a form of competition renders even a win-win trading scenario unacceptable to many Americans. That mindset, said Mutz, “lends itself really easily to this inter-group competition way of viewing the world where we’re only happy if we can beat the other guy.”

How does media coverage affect people’s trade attitudes? Mutz suggested that the harms of globalization and trade are “easy to report on,” versus stories about job gains, which are often covered in more abstract terms. Past research suggests that people are better able to relate to the plight of one person versus thousands, said Mutz, and that “negative consequences are a lot easier to visualize than positive ones.”

Survey comments back her hypothesis. People often reported that they pictured one jobless person far more vividly than “the large collective.”

The heightened relevance of her findings is not lost on Mutz. Factors driving support for Trump, she said, include measures of racial prejudice, anti-immigration views, and high levels of social dominance orientation — belief in social hierarchies.

“The need to win, win, win, and dominate others and be the best and the top and first and so forth, all of those kinds of things, and those reasons for favoring him, are part of the same complex of attitudes and ways of viewing the world.”