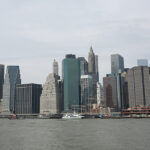 Daniel Aaron, the Victor S. Thomas Professor of English and American Literature Emeritus, died Saturday in Cambridge. He was 103.

A pioneer in American studies and a prolific author, Aaron was also instrumental in founding the Library of America canon of classics.

“Never have I known an intellectual and a great scholar who wore his learning so lightly, and with such capacity to delight,” said James Simpson, the Donald P. and Katherine B. Loker Professor of English and chair of the English Department. “Conversation with him was utterly singular. He had the knack of negative capability to an extraordinary degree: immersing himself entirely, chameleon-like, in his interlocutor, while simultaneously and quietly impressing his own delightful stamp on any meeting. He has a place of deep affection in the hearts of everyone who was lucky enough to be touched by his angelic smile and singular intelligence.”

The son of Russian-Jewish immigrants, Aaron was born Aug. 4, 1912, and orphaned by age 10. As a Harvard graduate student in the late 1930s, he was the first to study in the program that would become American studies. In his 2007 memoir, “The Americanist,” he wrote of finding intellectual purpose through the lens of World War II. 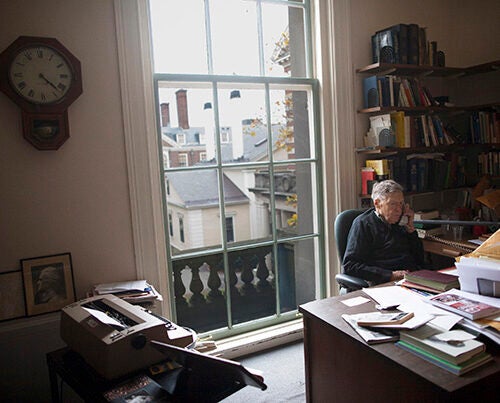 “The United States suddenly loomed as the last democratic bastion in the world after the German occupation of France in 1940. About then, I began to feel that it might be almost as important to understand American civilization as to preserve it.”

A man with a long, angular face and gentle blue eyes, Aaron taught at Smith College for 30 years, returning to Harvard as a member of the English Department faculty from 1971 to 1983.

Helen Vendler, the Arthur Kingsley Porter University Professor, had an office down the hall. The renowned poetry critic remembers Aaron’s office as “an American version of a salon — with Dan’s boyish presence being the catalyst for all visitors.”

“As I would walk down the corridor, Dan was very often engaged with someone in lively conversation — friends, colleagues, students, people from China, Germany, and England,” Vendler said. “My granddaughter was so taken with him on an earlier visit that she returned to see him a month ago. When she told him she was originally thinking of applying to Yale as well as Harvard, he said dryly, ‘I never found anything particularly interesting about New Haven.’ He could — at 103 — chat as easily with a pre-freshman as with a colleague.”

Aaron’s dedication to academic life was, Vendler said, evident in his daily journey to the office — “first by bike, then by foot, then with a walker, and then in a wheelchair.” He worked on an IBM Selectric typewriter and always answered the telephone on the first ring.

Aaron’s “Writers on the Left: Episodes in American Literary Communism” (1995) has a home on every young academic’s bookshelf. “The Inman Diary: A Public and Private Confession” (1985) was a project born from the journals (17 million words’ worth) of Arthur Crew Inman, a reclusive hypochondriac who lived in Boston in the early 20th century. Harvard University Press reprinted “The Inman Diary” several times, and the book inspired a play, opera, and documentary.

Among his friends were literary luminaries such as Robert Frost, Ralph Ellison, and Truman Capote. He graded John F. Kennedy’s literature papers and found his way into Smith grad Betty Friedan’s acknowledgements in “The Feminine Mystique.” He was awarded the National Humanities Medal in 2011.

Last summer, at 102, Aaron published “Commonplace Book, 1934-2012.” The volume is filled with quotations, recollections, verse, and story plots. He enjoyed all topics of conversation, even death, which he wrote about on more than one occasion.

D aniel Aaron
A rrived August 4, 1912
N amed after no one, in particular
I nvented nothing, except in words
E ven disposition
L oved a good deal and was loved

Aaron’s wife, the former Janet Summers, died in 2003. He is survived by three sons, Jonathan, Paul, and James; a granddaughter; and two great-grandchildren. A memorial service will be held at Harvard in the fall.