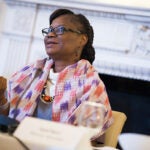 While globalization has fulfilled some of its early promise to open markets, spur growth, encourage innovation, and remove tariffs, taxes, and other trade barriers between nations over the last two decades, many hurdles and painful costs have festered.

This week, Harvard Law School (HLS) will host the decennial academic conference of the World Trade Organization (WTO), bringing together scholars, government officials, legal practitioners, and representatives from around the world to discuss the present challenges facing the WTO and the future of trade. The WTO, which began in 1995, oversees the crafting and implementation of multilateral trade agreements and rules, monitors their compliance, and resolves disputes among 162 countries.

The lead organizer of the event, Mark Wu ’96, is an assistant professor at HLS who specializes in international economics and trade law. He spoke with the Gazette about the most pressing issues affecting trade and the WTO, and how he sees the future of trade policy.

GAZETTE: What’s the history and purpose of this event?

WU: The WTO is the intergovernmental organization that governs world trade. Every decade, the Appellate Body, its highest court, convenes a series of worldwide conferences to discuss the issues and challenges that it faces. This conference provides a rare opportunity for the Appellate Body members and senior WTO officials to have a vibrant exchange with its stakeholders. It draws together a diverse set of officials from government, academia, law firms, companies, nonprofit and international organizations, and think tanks. More than 175 people from over a dozen countries spanning five continents, including nearly 50 Harvard alumni, will assemble in Cambridge for this discussion. They harbor different views about whether the WTO dispute-settlement system is working well or not. The conference offers a chance for them to air their views and listen to others whose opinions may differ.

GAZETTE: Is this a pivotal moment for the WTO?

WU: Since its founding two decades ago, the WTO has had some major achievements, but also faces major challenges. One function that is working well is dispute settlement. This is in contrast to its negotiating function, which is floundering. Since 2001, trade ministers have tried, unsuccessfully, to conclude the WTO’s Doha Round, focused on a development agenda. Last December, those multilateral negotiations broke down in Nairobi [Kenya]. Meanwhile, smaller subsets of WTO countries are working to craft new trade deals among themselves, such as the Trans-Pacific Partnership (TPP) between the United States, Japan, and 10 other countries. However, it’s far from clear whether the TPP will be ratified. This leaves the WTO facing the question of: what next? And it raises the question of what the potential implications for WTO dispute settlement will be if its negotiations cannot be successfully restarted.

More broadly speaking, global trade has experienced a slowdown since the financial crisis. Economists are engaged in a debate over how much of this slowdown is structural versus cyclical. But it’s clear that things are not quite the same as they used to be, and the WTO needs to figure out how to adjust.

GAZETTE: What do you expect will be the central and or most vigorously debated issues on the agenda? Generally, what are the positions of the key stakeholders on those issues?

WU: One of the debates, I expect, will be over what the growth of new trade deals such as the TPP will mean for WTO dispute settlement. Another is likely to be over questions about how to handle tensions arising from countries, such as China, whose economic structure differs dramatically. Another point of disagreement is over whether rules negotiated 20 years ago should be interpreted dynamically to fit the changing context. Some think that in light of the stalled negotiations, this is the preferred approach. Others, however, think that more judicial restraint is required, especially for an international treaty.

GAZETTE: What areas need immediate attention? Why haven’t the rules been updated since 1995?

What’s made it difficult to update the rules is the fact that WTO negotiations have traditionally operated on the basis of consensus. Countries often have not wanted to move forward on one issue without tying it to progress in another area. In addition, geopolitical power has shifted since 1995, making it more difficult to reach a consensus even among the major trading powers.

GAZETTE: Will the outcome of the 2016 U.S. election impact the WTO and trade more broadly? If so, how, and is this a concern for stakeholders?

WU: Yes, definitely. It’s not just the WTO that is facing questions about its future. This presidential campaign has illustrated how the American public is itself torn about the direction of this country’s trade policy. Should the U.S. seek to create new trade agreements? If so, what type? Where and with whom should these agreements be made? How the American public decides these difficult questions will have a major impact on the WTO. There is growing concern that the U.S. will focus its negotiating energy primarily on the TPP and other regional agreements, or turn increasingly protectionist. Neither scenario would be good for the WTO as an institution.

GAZETTE: Given the lack of progress on the Doha Round, can WTO remain relevant, or are regional trade agreements the future?

Personally, I think the era of the big multilateral trade deals may be nearing its end. Or at the very least, it’s going on a long hiatus. Therefore, WTO rules will likely be supplemented by regional trade agreements and other smaller agreements among subsets of countries in the WTO. We all will have to learn to adjust to a more complicated legal regime, in which the WTO plays a role but does not have the only relevant set of rules.