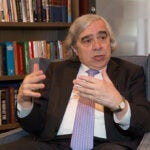 Veteran U.S. envoys explain the complex pressures of their jobs, and the obstacles — and benefits — that come with their gender

American foreign policy has never been more complicated. As the country faces key concerns involving globalization, terrorism, climate change, nuclear proliferation, and cybersecurity, there is no agreement among U.S. presidential candidates about when and how the nation should engage with the world militarily, economically, and philanthropically.

As technology makes nations more intertwined than ever, the United States has had to recalibrate its global role away from John Wayne the sheriff and toward Henry Clay the consensus-builder.

“I don’t think we should always lead. There’s a limit on how much capacity we have and where. I think the difference is Americans often have a desire to make things happen, to get things done, but I don’t know that our leadership is always the right voice,” said Ambassador Kristie Kenney, strategic adviser on foreign policy to Secretary of State John Kerry as counselor of the department. “Our world is a lot bigger, and I don’t think America can go it alone — [and] I think that’s a good thing.”

While its input and leadership is still important, the United States doesn’t “always have to be in the front row” on every issue, she said during a talk about diplomacy Wednesday with former Ambassadors Wendy Sherman and Swanee Hunt.

As undersecretary of state for political affairs before her retirement last fall, Sherman was the State Department’s lead negotiator on the historic Iran nuclear arms deal. She is now a senior fellow at the Harvard Kennedy School’s Belfer Center for Science and International Affairs. Hunt is the Eleanor Roosevelt Professor of Public Policy and founder of the Women and Public Policy Program at HKS. She was U.S. ambassador to Austria from 1993 to 1997.

The trio spoke candidly with HKS students who plan to enter the Foreign Service about their experiences, and both the advantages and difficulties they’ve faced as women representing the United States around the world.

While technological advances have made communication, the lifeblood of diplomacy, faster and easier, that has come at a price, putting greater time demands on State Department staff and leaving their work facing rising risks from hackers. That’s a worry Sherman regularly warned her staff to be mindful of at all times “because it can all be on the front page of The Washington Post tomorrow, and we’re all going to have to live with that.”

“On my State Department BlackBerry, I communicated lots of things because the speed of time and the demands of Washington required me to write things on my email back to Washington that in previous days I might not have,” said Sherman, who noted that speed was so essential during the Iran deal negotiations that “the only way” she could communicate with her Iranian, European, Chinese and Russian counterparts was through unclassified email. Some material was likely classified after she retired, she added, an indirect reference to the controversial email practices of Hillary Clinton during her tenure as secretary of state.

“We need to think through the norms for the use of our BlackBerries and iPhones as diplomats, and we really haven’t had all of the dialogue we need to have about those norms,” said Sherman.

Asked how gender affected their interactions, particularly with leaders from countries where women did not hold positions of power or were not as visible in the public sphere, all three women said there are certainly some challenges to being treated as an equal or in overcoming stereotypes.

Being well-informed and prepared, showing respect for and a willingness to work with people who may not share your views, making an effort to develop and maintain relationships, and advocating for yourself are all vital, said Kenney, who served as ambassador to Ecuador and was the first female ambassador to Thailand and the Philippines.

But their gender also offers some advantages, they said, such as greater freedom to say things that would be received far differently if uttered by a male colleague or to use traditional social conventions of dinners and galas to gain better access to world leaders.

For students, hearing directly from such accomplished female diplomats was inspiring.

“I must say, every single time I meet with a distinguished member of the Foreign Service, I’m more confident that this is the right decision I’ve made in my life,” said Abdulaziz Said, M.P.P. ’16, who organized the panel. “As a man, I left this conversation with a shared responsibility for uplifting women and girls around the world.”

“Everyone who’s come to speak to us from the Foreign Service has been a senior male and can’t really relate to the struggles of being a woman in these positions or having to run a family at the same time,” said Tracey Lam, M.P.P. ’16, who will enter the U.S. Foreign Service after graduation. “It’s such a rare occasion to be able to sit with three senior, strong women and know that it’s possible.”