Sustainability front and center for Cousteau 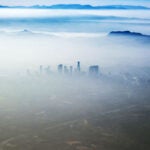 As a young man, Jacques Cousteau aspired to be a naval aviator, but a car accident diverted his dreams. Doctors suggested that he swim to regain his strength. It was this fortuitous turn of events that turned his gaze from the air to the sea, and quite possibly saved him from becoming a casualty of war.

“If it wasn’t for that car accident, I wouldn’t be standing here right now,” said his grandson, Philippe Cousteau, delivering the Harvard Extension School’s Lowell Lecture on Tuesday.

Cousteau, an author and Emmy-nominated TV host, has established himself as a prominent environmentalist who strives to stay true to the legacy of his late father, Philippe Sr., and grandfather.

“My grandfather wasn’t deterred by problems,” Cousteau said. “He wanted to solve them, and this helped to put him on a path to change the world.”

Change is becoming a more urgent matter, and Cousteau has tapped a gift for storytelling to spread the word, hoping to urge readers and viewers toward sustainable choices. The world is facing an unprecedented crisis, he said. 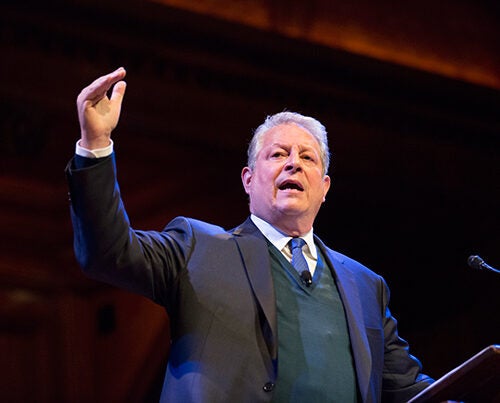 “We are cramming more people into a bank vault, with the same amount of oxygen,” he said.

The World Wildlife Fund estimates that we consume 1½ times the amount of resources that the planet can renew each year. “It’s like a farmer eating his seed,” Cousteau said.

In an effort to preach beyond the converted, Cousteau helped launch EarthEcho International, a joint venture with his siblings in honor of his father. The nonprofit hopes to guide young people to identify and solve environmental challenges starting in their own communities.

Pushing for a wider commitment to everyday action, Cousteau noted that many people assume that responsible and social investments sacrifice monetary gains. But “impact investing” can bring returns equal to traditional investing, he said, using a graph of the social progress index to underline the point.

Cousteau asked the students in the audience to view whatever career they choose through the lens of sustainability. “Please think about how we can leverage capital markets to change the world, and turn all of this money in a positive direction,” he said.

In conclusion, Cousteau assured the audience that nature has an incredible capacity to renew itself — when given a chance. Evidence came in the form of photos of Bikini Atoll’s renewed ocean landscape after radiation kept humans away for 70 years.

“There is hope,” Cousteau said.