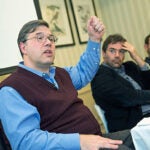 Al Gore brought a dose of climate-change optimism to Harvard, puncturing the typical gloom-and-doom narrative with the view that things are finally changing for the better and that the pace of that change has begun to accelerate rapidly.

Speaking to a full house Thursday at 1,000-seat Sanders Theatre, the former vice president acknowledged that climate problems still dwarf the emerging solutions. The planet continues to get hotter, storms stronger, and droughts longer. Last year was the warmest on record, and January and February of this year were both record-breakers, Gore pointed out. And the trend is for more heat, since we continue to pump enough greenhouse gas into the atmosphere every day to equal the heat energy of 400,000 Hiroshima-sized bombs.

The effects are all around, Gore noted, citing New York’s lingering repairs from Superstorm Sandy of 2012, as well as increased flooding in Miami, drenching rains in Houston, and a four-year drought in Syria that has killed 80 percent of the country’s livestock, caused 60 percent of its farms to fail, and helped drive 1.5 million refugees to its cities.

But Gore cited the adoption of renewable energy — mainly wind and solar power — as reason for hope. Renewable plants are being built at a rapid pace, making up 90 percent of new energy capacity globally. Those installations have already started to make a difference, he said, with global greenhouse gas emissions holding steady the past two years.

One pressing question, Gore conceded, is whether positive trends will move fast enough to stave off the worst predicted effects. Fossil fuels still provide more than 80 percent of global power. His hope lies in recent signs of exponential growth in new technology.

“We are winning this struggle,” he said. “We are not moving fast enough, but we are going to win it.”

Gore likened the adoption of renewables to that of the cellphone. When the cellphone industry was just getting started in the early 1980s, a consultant to AT&T predicted the company would be able to sell 900,000 phones a year by 2000. Instead, 900,000 were sold in the first three days of the year.

The growth of the industry, Gore said, has benefited from a combination of swiftly improving technology and demand — in the case of cellphones, for a way to leapfrog costly, cumbersome infrastructure of telephone lines. Today, cellphones are common throughout the developing world.

Renewable technology, Gore said, is ripe to take advantage of a similar dynamic. As technology continues to improve, the cost of installations should drop. In addition, he said, the potential demand for clean, distributed, off-grid power is enormous, with 1.5 billion people not connected to an electric grid and billions more with unreliable grid-based power

Gore’s talk was sponsored by the Harvard Global Institute, which was launched in October to foster interdisciplinary collaboration on large problems facing the world today, including climate change. Other sponsors were the Harvard China Project and the John A. Paulson School of Engineering and Applied Sciences.

Behind the upsurge in construction of renewable-power installations is a shifting economic reality, Gore said. Investors and power companies are growing cautious about new fossil fuel plants, to the extent that almost no new coal plants were built in the United States last year. The underlying reality, Gore said, is that there is $22 trillion worth of fossil fuel resources that cannot be burned, leaving stranded assets on balance sheets. That development, he said, makes fossil-fuel firms increasingly poor investments, something he urged Harvard to consider as it manages its endowment.

Another cause for optimism, Gore said, is the growing partnership on climate between the world’s two largest emitters — China and the United States. The two nations announced a major bilateral agreement in 2014, which China followed last year with the announcement of a cap-and-trade carbon emissions system.

“I’m very excited,” he said. “The answer to the question of ‘Will we change?’ is likely to be yes.”