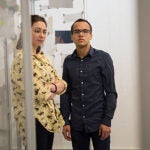 Elizabeth Garcia ’16 was raised on 12th Street, a poor, drug-infested neighborhood in Palmetto, Fla., she described as “a dead end.”

“My friends were teenage mothers before they were teenagers themselves,” she recalled, sharing her powerful story at the 10th annual Celebration of Scholarships dinner on April 8.

Her journey from Palmetto to Harvard was dramatic, and Garcia, who was born to immigrant parents who left school in the second and seventh grades, said the financial aid she received was life-changing.

“I knew I had entered the land of opportunity,” she said, of arriving at Harvard. “You believed in me.”

The annual dinner at Annenberg Hall is a chance for students who get support from Harvard’s Financial Aid Initiative to connect with their donors. Co-hosted by Tim Barakett ’87, M.B.A. ’93, and his wife, Michele; Lloyd Blankfein ’75, J.D. ’78, and his wife, Laura; Ken Griffin ’89; and Jerry Jordan ’61, M.B.A. ’67, and his wife, Darlene, the evening drew more than 300 guests, including Harvard President Drew Faust, Michael D. Smith, Edgerley Family Dean of the Faculty of Arts and Sciences, and William R. Fitzsimmons, dean of admissions and financial aid for Harvard College.

“Harvard’s mission — educating citizens and citizen leaders — demands we bring together students with profoundly different life experiences. This is a necessary condition for us to be able to prepare each of them to succeed and lead in a diverse world,” said Smith, who encouraged the crowd to match Griffin’s leadership challenge to endow 600 new scholarships.

Since launching the Financial Aid Initiative in 2005, Harvard has awarded nearly $1.5 billion in grant aid, and has increased its financial aid budget by 112 percent, from $80 million to almost $170 million. Students whose annual family incomes are below $65,000 pay nothing to attend, and each member of the incoming class of 2020 with that level of support will also receive $2,000 from a new start-up grant as freshmen to help ease the transition to college life.

“Our financial aid program has never been more important to the country than it is right now and, to be honest, who we are as an institution,” said Fitzsimmons.

In Annenberg Hall, beneath the Gothic trusses and the colorful flags marking each of Harvard’s freshman dorms, students such as Garcia and Shori Hijikata ’16 spoke about the impact financial support has had on their experiences at Harvard. Others performed. Andy Troska ’16, who plans to pursue a music career, sang “Ostrovok (The islet), Op. 14 No. 2” by Sergei Rachmaninoff, while Josh Bean ’16 accompanied singer Joshuah Campbell ’16 on piano for a beautiful rendition of the jazz standard “I Wished on the Moon.”

Before the dinner, Jarrod Wetzel-Brown ’16, an English concentrator who plans to go to medical school, said the financial support he received as a beneficiary of the Thomas J. Schneider Scholarship Fund allowed him to be more reflective, and make more thoughtful decisions about his future.

“In the moment, some things are more important than worrying about a test score or a project,” he said. “I learned not to just exist, but to learn, to really connect with professors and peers. I learned to linger and appreciate.”

For Bernadette Lim ’16, who is concentrating in human evolutionary biology, financial support has allowed her to have transformational experiences — studying in Kenya, studying low-income African-American families in Los Angeles for her senior thesis — outside the classroom.

“Every time I do something like that I think, ‘This is the Harvard experience I never thought was possible,’” said Lim, a Kushner Family Undergraduate Scholar, before the dinner.

Scholarship donor Bruce Menin ’84, a real estate developer, said the small part he contributes toward helping deserving students is rewarding, which makes the Celebration of Scholarships an “extraordinary” night to attend.

“Students are so impressive and their intentions so unique and imaginative and often directed at helping the world in significant ways. They are going back to states or countries of disrepair, hoping to solve big problems,” he said. “They are eminently qualified to make an impact and you realize the world will be a better place. They are dreaming big.”

He might well have been talking about Garcia, a Cabot House resident who told the audience that, along with her school studies, she found time to mentor low-income students in South Boston and serve as a co-director of the Harvard Square Homeless Shelter.