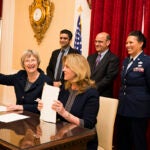 Joshuah Campbell learned to love being on stage as a little boy singing in his rural South Carolina church choir. When he arrived at Harvard four years ago, he knew he would continue to sing and act, but didn’t believe it was “in the game plan of my life.”

“I thought I’d be an academic,” he says.

But here Campbell, who is graduating with degrees in music and French, discovered a connection to performing that transcends entertaining and has come to shape his identity.

“If I’m not doing something artistic, or generating something, I’m not surviving,” Campbell says. “If I stopped singing or performing, I would cease to exist as I am.”

Sitting in the front parlor of the Signet Society house recently, Campbell reflected on some of those formative experiences. He joined the Krokodiloes, Harvard’s oldest all-male a cappella group, as a freshman, singing and touring with them for two years. He performed in the Harvard-Radcliffe Dramatic Club’s “Songs for a New World” and in the Harvard BlackCAST production of “Dreamgirls.” In his junior year, he joined the Hasty Pudding Theatricals, which he calls “the most intensive stage experience I’ve ever had.”

“I’ve been overwhelmed by the opportunities,” Campbell says. “You get used to it, but it doesn’t get old. I’m always honored when someone says they want to work with me on something, or sing with me on something. I’m blessed to share my gifts and I also, in turn, want to see the work they are doing.”

In February, Campbell was tapped to introduce Conan O’Brien when the comedian and Harvard alum returned to campus for a conversation with President Drew Faust. But he counts as most personally gratifying the original song he wrote and sang last fall at the Harvard protest in support of black student activists at Yale and the University of Missouri, Columbia.

“Realizing my being black and being on stage — and how being a person of color you have to perform in other aspects of your life — that was a powerful moment,” he says. “It meant something maybe I can’t put words to.”

Campbell’s other passion, French literature, provided him a unique lens through which to see the world.

“It’s not so much about the language, but using this body of thinkers and writers as a way to contextualize the world,” he says.

After graduation, the Pforzheimer House resident plans to move to New York or spend a year in Paris, the subject of his senior thesis recital (“Paris Tout Entier: Musical Histories of Improvisation and Blackness From African-American Musicians in Paris, 1920 to Now”). But Campbell, who also credits his faith as a source of strength, still thinks acutely about how life-changing Harvard has been for him.

“I often tell people that statistically — and by a lot of parameters — I wasn’t supposed to be here. It’s sort of amazing. People barely leave my state, let alone no one from my high school had been to Harvard,” he says. “I’ve learned to latch on and grasp every opportunity. I haven’t lost the feeling of wanting to take it all in.”