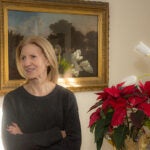 Adventures of the heart

In visit to Harvard, O’Brien tells students how humanities opened his world

Few comedians visiting Sanders Theatre could deliver a skit on being Harvard’s president — tipsy at a bar and arm-twisting an alumnus into addressing  Harvard students — and absolutely bring down the house. But comedian Conan O’Brien ’85, pulled off the joke.

O’Brien joined President Drew Faust Friday for an entertaining chat about the importance and lasting value of an arts-and-humanities-based college education.

Gazing out at the crowd, O’Brien recalled his first public performance at the theater, when he served as master of ceremonies for a concert by the Radcliffe Pitches in 1982.

“I’ve never been that scared in my life,” he said of that night. “I was petrified, so it’s really weird to have come full circle and be back here now and hearing the same silence that I heard then.”

Asked by Faust, a Civil War historian, about what he learned at Harvard that he still uses in his comedy career, O’Brien quipped, “absolutely nothing.” On choosing to concentrate on American history and English literature, he joked, “I just wanted to keep it as wide open as possible so that I would be unemployable.”

O’Brien noted that because he has been successful, he is frequently approached by college students for advice about getting into comedy or show business. All too often, he said, the students are studying communications rather than liberal arts, thinking that’s more practical or that it gives them a professional leg up.

“I don’t want to say it to [their] faces, but I think, ‘What are you doing?’ College is when you should actually get about as lost as you can get in terms of expanding what it is you want to know, what it is you think you know going forward.

Comedian and television host Conan O’Brien joined Harvard President Drew Faust at Memorial Hall for an entertaining chat about the importance and lasting value of an arts-and-humanities-based college education.

“Go places, think about things that you would not normally think about,” he said. “You do not get this opportunity again.”

O’Brien said that what he loved about his Harvard education was meeting people from a variety of backgrounds who got him interested in subjects he hadn’t been exposed to as a public school student in Brookline, such as urban planning in Cairo.

“It just doesn’t come up in my professional life, but I do think it was valuable for me,” he said. “That kind of meandering that you do sometimes when you’re in school is really helpful.”

While in college, O’Brien joined The Harvard Lampoon and served as the club’s president for two years before going on to make his professional name, first as a producer and writer for iconic shows such as “Saturday Night Live” and “The Simpsons.”

In 1993, NBC chose the mostly unknown O’Brien to take over the 12:30 a.m. time slot left vacant when David Letterman decamped for CBS. It was a surprise move given O’Brien’s lack of on-camera experience. Despite some poor early reviews, O’Brien went on to host the quirky cult favorite “Late Night With Conan O’Brien” until 2009, when he succeeded Jay Leno as host of “The Tonight Show.” After only six months away, Leno returned, reclaiming the job in an ugly and public power struggle. A year later O’Brien was back with “Conan,” a late-night talk show on TBS.

Following his Harvard visit, O’Brien was headed to South Korea to film his show after a fan there persuaded him to visit by writing a long, witty letter on an SAT practice exam, instead of preparing for her test. O’Brien’s previous funny and freewheeling trips to Cuba, Armenia, and Finland have garnered notice for what some critics call his “weird diplomacy,” referring to his charming turns as a self-deprecating fish out of water.

“Now in my career, I’ve gotten to this nice spot where if I have an idea, I can pursue it,” he said. “I love to keep learning, I love to keep finding out about things.”

Questioned by students about his career and time at Harvard, O’Brien urged them to resist the temptation to take the safest route.

“Liberate yourself a little bit. Allow for mistakes, allow for problems. I’ve had my career blow up on me about two different times, and I’m still here and quite grateful and learned a lot during those moments, and wouldn’t really change a thing about any of it.

“I think Harvard, as great as it is — and no one is telling you this, it’s just subliminal — students too often think, ‘I have to do great things, and I need to succeed.’ You just have to be willing to screw up and not freak out when you do screw up — because you will survive.”