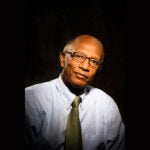 In her Noble Lecture at the Memorial Church Sanctuary on Monday evening, the literary giant enchanted her audience with “The Divine,” a statement against the “invidious judgment” of Western modernity on mythic elements in sacred narrative.

“We stigmatize what we feel we must reject,” she said to the crowd that filled the pews despite the ill-timed April snowstorm. “I argue that we have reduced in a way the scale of human experience.”

Robinson, who was awarded the National Humanities Medal in 2012, is beloved for her four novels, “Housekeeping,” “Gilead,” “Home,” and “Lila.” “Gilead,” the story of a small-town pastor in Iowa, earned the author the 2005 Pulitzer Prize. She has also won acclaim for her essay collections, including “The Givenness of Things” (2015), about faith and humanity.

“It is the absence of divinity that dehumanizes nature,” she told the crowd. “There’s nothing paradoxical in this thought. Myth brings scale to the narratives that stir the human imagination. Properly speaking we are the stuff of myth, and yet we have no language to address the scale of the experience we have, not only as dwellers in a cosmos, but also as creatures whose thoughts naturally inhabit the vastness of myth, creation to doomsday, who see our galaxy as a path across the heavens, who spin out new tales of the impossible even while we sleep.”

Robinson joined the long list of leaders and thinkers whom the Divinity School’s William Belden Noble Lectures, established in 1898 by Noble’s widow, have brought to Harvard. She was introduced by Professor Matthew Potts, who called her a “profoundly moral writer.”

“She causes us to wonder,” he added, before turning over the lectern to Robinson.

Brushing her long white hair from her face, the 72-year-old author took note of the gilded eagle affixed to the front of the lectern before commencing with her lecture. “I have a larger and more glorious bird than Bernie Sanders did,” she said, prompting roars of laughter.

In her talk, Robinson drew from a variety of literary sources, quoting William Wordsworth and Emily Dickinson (“The brain is wider than the sky”) and expounding on the pluralistic God (the Hebrew Elohim) in the Old Testament.

After the lecture, Mary Sue Daoud, a graduate student at Harvard’s Graduate School of Education, stood in a line that wrapped around the church, waiting for Robinson to sign her copy of “The Givennness of Things.”

“It’s exciting as a devout Christian myself to see someone leave their mark on the academic world without compromising their faith,” she said.

Casper ter Kuile, who is studying jointly at Harvard Divinity School and Harvard Kennedy School, found in Robinson’s theme a link with his examination of fitness organizations that use religious language to connect with exercise enthusiasts.

“If you go to SoulCycle, they ask, ‘Who are you riding for?’ It’s about more than yourself. It’s the greater something, about transformation,” he said. “There is something more important than our everyday life.”