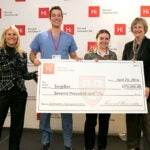 Diana Sorensen, who has led Harvard’s Division of Arts and Humanities for 10 years, steps down

When Harvard Dean of Arts and Humanities Diana Sorensen steps down this summer to return to full-time teaching as the James F. Rothenberg Professor of Romance Languages and Literatures and of Comparative Literature, she leaves a legacy of innovation and championing one of the most celebrated and valued parts of undergraduate education.

“She has created a foundation for a new and uniquely Harvard approach to melding academic inquiry with artistic practice,” said Drew Faust, president of Harvard University and Lincoln Professor of History, at a celebration for Sorensen on April 20. “Diana has started and given momentum to developments that will extend well beyond her own tenure as the dean of arts and humanities.”

Equal parts diplomat and straight shooter, Sorensen’s is a voice that is always gracious even when having difficult conversations or challenging the status quo, according those who have worked with her.

“I don’t know if any other administrator at any institution I’ve been at is so beloved,” says Shigehisa Kuriyama, chair of the Department of East Asian Languages and Civilizations and Reischauer Institute Professor of Cultural History. “She’s extremely receptive and a great listener and adjudicator among a diversity of opinions. She has a very gentle knack for shepherding people — not in any direction she’s determined, but in harmonizing different points of view.”

“At a time when the public narrative on the humanities was framed in terms of crisis, Diana took a completely different approach,” said Michael D. Smith, Edgerley Family Dean of the Faculty of Arts and Sciences. “With passion, commitment, and a barn-raising style of leadership, she engaged our faculty in making an affirmative case for humanistic study. The evidence of her success is clear, with over-subscribed new curricular initiatives and growing concentrator numbers here at Harvard. But just as importantly, she also reminded us all of the value of understanding historical context, of surfacing ethical consequences and tensions, and of looking deeply for meaning.”

In the 10 years since being appointed, Sorensen has used her deft touch to enable nearly a dozen new and enhanced curricular and outreach efforts. These include the undergraduate Summer Humanities Arts and Research Program (SHARP), the expansion of the Standing Committee on Ethnicity, Migration, Rights, and a new Theater, Dance & Media concentration (TDM). In asserting the fundamental centrality of the arts and humanities in such a rapidly changing world, she established the Humanities Project, a two-year research project that led to undergraduate courses Humanities 10a and 10b courses, and the Framework classes “The Art of Looking,” “The Art of Listening,” and “The Art of Reading.”

“TDM is the biggest initiative in my time here. New concentrations don’t come around so often, and it was going a little bit against the tide,” said Martin Puchner, the Byron and Anita Wien Professor of Drama and of English and Comparative Literature and chair of the Committee on Theater, Dance & Media. “I can also say that Humanities are great courses that wouldn’t exist without her. There is something tenacious about her. She never gave up and was never flustered.”

Sorensen’s composure is matched by an elegant sense of style that is well-known among her colleagues. “Her general presentation is the envy of many men and women on the campus,” said Homi K. Bhabha, Anne F. Rothenberg Professor of Humanities and the director of the Mahindra Humanities Center. “But she has a deeper elegance of spirit and character.”

Bhabha likens Sorensen to his favorite yoga instructor in India, a teacher who says there is no point in doing a yoga pose without having the critical ability to see oneself doing the particular movement.

“She looks at herself as others would see her. She is great at putting herself in the position of other people, and she’s very attentive to detail. When you are a colleague in an administrative position, it’s a tricky terrain to be in,” he said. “Even in tough decisions she has to make, she has an unfailing sense of sensitivity and courtesy.”

Beyond the fortified arts and humanities curricula, Sorensen has been instrumental in working to engage the humanities in the entrepreneurial sphere. She took the lead, partnering with Harvard Business School Dean Nitin Nohria to create the Deans’ Cultural Entrepreneurship Challenge at the Harvard Innovation Lab.

Sorensen also recognized the importance of building community outside the classroom. To that end, she focused some of her time as dean on the Silk Road, Arts @ 29 Garden, an ongoing series of Student Faculty Dinners, and the renovation of Barker Arts Café. One of her most creative initiatives, the café regularly hosts poetry slams, personal storytelling, readings, and music, and is beloved by undergraduates.

When she leaves her post in June, she will hand the divisional reins to Robin Kelsey, the Shirley Carter Burden Professor of Photography and chair of the Department of History of Art and Architecture, and return to her areas of specialty, namely 19th- and 20th-century Latin American literature and culture, comparative literature, cultural theory, and gender theory.

Said Kuriyama: “As dean, one has influence not only on policy, but the atmosphere of a place. The large part of the willingness of people to engage and contribute and collaborate in our division has been because of her leadership.”