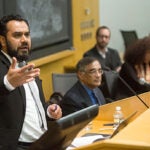 The fears of American Muslims

Not long ago, only bold-faced financiers and business tycoons would even think of plunking down cash for a $10 million beachfront penthouse or a $25 million pied-a-terre overlooking New York City’s Central Park. Thanks to a luxury real estate boom, lots of high-end properties are being sold today, but to whom has become a shadowy question.

For the first time, title insurance companies will be obligated to discover and disclose the identity of an actual person, or “beneficial owner,” behind any legal entity, usually a limited liability corporation (LLC), used in a residential transaction. That information will become part of a database that will be available to law enforcement investigators.

Such purchases, made using shell companies that conceal the identity of those involved as well as the source of their cash, are often favored by foreign buyers and now constitute half of the home sales of $5 million and up nationwide, according to a 2015 expose in The New York Times. In New York City and Los Angeles, that number is even higher.

Some analysts suspect that the widespread use of LLCs or other opaque vehicles, which can be enmeshed in an international shell company network that is difficult for law enforcement to untangle, facilitates money laundering or those looking to keep ill-gotten gains out of the reach of government authorities, suspicious relatives, and others.

Although granted broad powers under the USA Patriot Act of 2001 to institute and enforce anti-money-laundering measures in a variety of industries, including banking, mortgage, insurance, and real estate, the Treasury Department has not required those involved in real estate closings, such as title companies, real estate and escrow agents, or lawyers, to ascertain or report who profits from the purchase and sale of properties.

Juan Carlos Zarate ’93, J.D. ’97, is a visiting lecturer of law at Harvard Law School, a former deputy national security adviser in the George W. Bush administration, and a former assistant secretary of the U.S. Treasury for terrorist financing and financial crimes. The Gazette spoke with Zarate about the scope of the problem and what this new oversight might portend.

GAZETTE: How pervasive is money laundering in the U.S. today, and how much is tangled up in real estate?

ZARATE: The concern over high volumes of illicit capital flowing in and through the United States, especially in the real estate market, is real. The reason for FinCEN’s GTO [geographic targeting order] is precisely to get more data around what may be happening in terms of real estate investments and money laundering. The concern is the use of front companies and shell corporations to invest large amounts of money in high-end properties as a way of hiding or layering illicit funds. The two markets targeted by FinCEN’s rule — New York and Miami — have seen an increase not just in foreign purchases of high-end property, but also a high percentage of that happening through front companies and shell corporations. When you look at the Manhattan market, some of it is coming from Russia and China, and in Miami from sources like Venezuela and other places where you have inherent risk.

So the fact-gathering is an attempt to get a handle on what may be the movement of illicit financing into the real estate markets and the use of real estate as a high-volume money-laundering vehicle in the U.S. To your broader question, globally, money laundering represents an extremely significant challenge for authorities, to the tune of billions of dollars of illicit capital. Money laundering, of course, is the attempt to hide, layer, and place illicit funds and ill-gotten gains, to make those proceeds look legitimate, and to find ways to place them or layer them back into the economy. That happens in all sorts of ways, and it can happen through the purchase of real estate.

GAZETTE: Who are these all-cash buyers? And aside from Manhattan and Miami-Dade, where else is it a problem?

ZARATE: Buyers come from all sorts of countries and places. There’s been concern, for example, in the New York market that you have a predominance of Russian- and Chinese-sourced purchases and questions as to who are the beneficial owners of those properties, and in particular the shell corporations — who or what is behind those purchases. The same goes for Miami. But in Miami, it’s not just Russian money, but also money coming out of Latin America, in particular places like Venezuela. Any place you have high-value property and the ability of foreign investors to find attractive investment opportunities because of new development, because of markets opening up, because of the likely increased value of property as a way of retaining and gaining value, you’re likely to see foreign investment. Certainly you’ve seen that in the Los Angeles and Southern California real estate market, and I think the same goes for Northern California around the San Francisco/San Jose area. There’s no question that FinCEN’s focus on New York and Miami is just the tip of the iceberg in terms of their attempts to understand what’s happening in the United States … that will no doubt take them to other cities and geographies.

GAZETTE: Why are so many more luxury properties acquired through shell companies today than, say, 10 or 20 years ago? And are there legitimate, lawful reasons for someone to hold property in a shell company?

ZARATE: Part of it is there’s been an easing of the ability to create these vehicles in different jurisdictions and legal mechanisms — lawyers, accountants who specialize in this work — and the ability to create different corporate vehicles for all sorts of economic and financial purposes for transactions, including investment in real estate. Certainly there are legitimate uses where you have groups of investors involved, specific legitimate transactions facilitated, or you may have certain individuals who are worried about revealing their wealth or being harassed or even targeted by oppressive regimes, and so you can imagine situations where at least having a vehicle that hides the beneficial ownership, on first blush, or creates a useful investment vehicle is helpful to some legitimate actors and investors.

That said, there is a presumption in the international system that shell companies present a real risk of money laundering, that there’s additional due diligence and a risk determination that has to go along with any transaction or business relationship tied to shell companies. The risk is that banks or other elements of the legitimate commercial or financial system are being misused and that elements and vehicles of the economy are suddenly being put at the command of these organizations or these corporate vehicles that then allow them to move all sorts of illicit capital in and out of the U.S. market or other markets.

ZARATE: There are two fundamental national security implications. One is the ability of rogue actors — be they criminal organizations, nation-states in concert with proxies, terrorist organizations, all with the ability to access capital — to hide their proceeds, to gain profit, to meld it with a legitimate system. All are dangerous because that allows those groups to have profit and capital that allows them to do dangerous things. The reality is money laundering is an enabler for groups that present real threats to the United States and to its allies and to, frankly, international security. So that’s a more tactical concern. The broader concern is about the challenge and threat to the integrity of the financial system. When we worry about … the U.S. or the global financial or commercial system, you worry about its safety, soundness, and integrity. And if much of the activity, or some significant portion of the activity in the economy, is derived from illicit gains, corrupt proceeds, illicit finance, that’s an inherently unstable and dangerous system that presents real risk to the economic health of a country or the global economy and governance.

GAZETTE: Why weren’t real estate closings, and those involved in them, required to abide by the anti-money-laundering requirements in the Patriot Act? And given The Times’ series, as well as widespread anecdotal evidence, why is there only a temporary information-gathering program and not an enforcement action?

ZARATE: It’s certainly not the first time authorities have worried about real estate being used as a money-laundering vehicle. That’s in some ways a classic methodology and concern globally. The regulatory structure for the real estate market and actors is complicated. FinCEN has spoken to this issue before, even though real estate agents, title, and escrow companies are not considered financial institutions for purposes of the Bank Secrecy Act. I think the challenge is at what point do you best regulate the flow of funds in and out of the real estate market? That presents interesting questions about federalism and regulatory efficiency and a question as to whether or not regulation versus law enforcement attention is the right approach. So there’s always been a question about what the right approach should be.

But with The New York Times expose, with the greater flow of funds into these key real estate markets, I think what FinCEN is trying to do is to not only understand better what’s happening, but to build a record so as to begin to think about what the right regulatory structure looks like. And there is an interesting question as to who’s ultimately responsible here for understanding beneficial ownership. Is it the title insurance industry? Is it the real estate broker? Is it some element of the financial-settlement process that has to happen? Part of this, too, is an exploration of where in the real estate process do you demand this type of enhanced diligence and clarity? That’s in part what FinCEN’s grappling with as well: Who’s going to have access to that information and who can demand it.

GAZETTE: What do you expect the review will find, and is this a prelude to new enforcement?

ZARATE: FinCEN will undoubtedly discover problematic transactions and gaps in the real estate markets targeted. This all may result in some sort of demonstrative enforcement action. That is something that GTOs have tended to lead to in the past: law enforcement attention and focus, and then either law enforcement or regulatory action. So that’s one potential result of this. The second is the fact-gathering allows FinCEN to think more aggressively about what anti-money-laundering regulation in the real estate space should look like and how best it should be implemented. And third is a marker for where else to potentially look for vulnerabilities, not just geographically, but it may demonstrate that there are other holes in the system that need to be looked at more carefully.

So the fact-gathering dimension of this is very helpful to make cases, to understand regulatory options, and then to also understand where vulnerabilities lie. I think it’s inevitable that they’re going to find things they hadn’t seen to date, and the scope of the problem may be bigger than what we’ve seen reported.

GAZETTE: How might requiring disclosure of owners affect the way such properties are sold? Won’t people just move to another vehicle?

ZARATE: It’s a great question, and again it goes to what’s the most effective way of getting this information and ensuring that it’s vetted? Also, how do you ensure that you’re not just creating one blockage in the system and allowing workarounds, either with new special-purpose vehicles or new processes that in essence layer further the ultimate beneficial ownership? That’s a broader challenge of the anti-money-laundering system. How do you stay ahead of criminals and actors who are trying to hide sources of money and getting more sophisticated every time in using corporate formation, legalities, and layering to hide sources of wealth and sometimes ultimate beneficial ownership? It’s just part of the organic process of dealing with anti-money laundering, trying to ensure accountability and transparency and traceability in the system. In this case, what that looks like for the real estate market is still in formation.