Final OK for Science and Engineering Complex in Allston 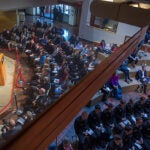 Higher education and the military

BRA approval clears path for work to begin this summer

Harvard University has received unanimous final approval from the Boston Redevelopment Authority (BRA) for its planned Science and Engineering Complex (SEC) in Allston. The SEC will house approximately two-thirds of the Harvard John A. Paulson School of Engineering and Applied Sciences (SEAS) when it opens in 2020 and will be among the most cutting-edge teaching and research facilities in the country — featuring laboratories, classrooms, and related teaching and research space.

The building, located across from Harvard Business School and the Harvard Innovation Labs cluster and adjacent to the emerging enterprise research campus, will be used by more than 900 undergraduates on any given day. In addition, it will be home to more than 400 SEAS graduate students, more than 450 researchers, and initially, as many as 80 faculty members.

“The Science and Engineering Complex is a state-of-the-art facility that will enhance partnership across academic disciplines and encourage connections among the University, the community, and new partners in industry and research,” said Harvard University President Drew Faust. “The growth of our campus in Allston is an extraordinarily exciting opportunity in the Greater Boston region for collaboration, discovery, and innovation.” 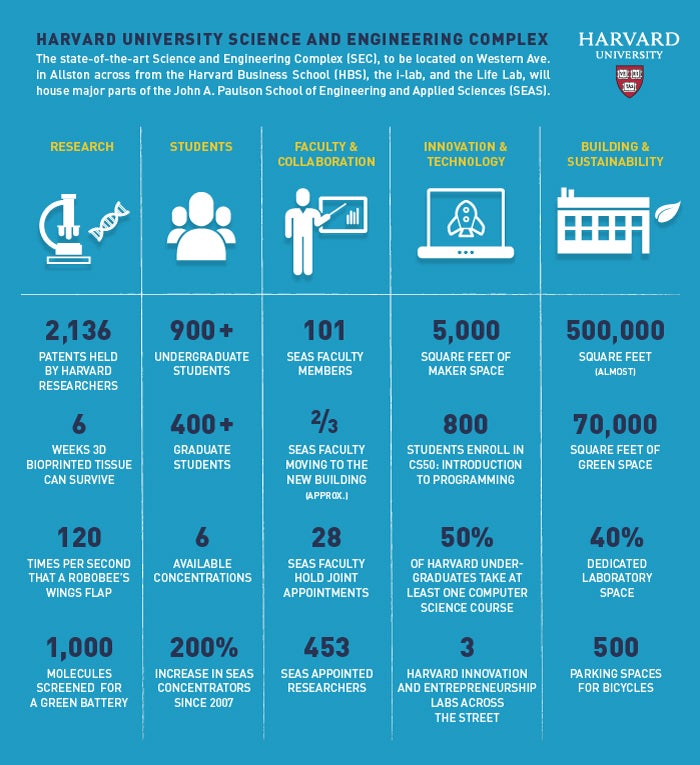 SEAS, the fastest-growing School at Harvard, has seen its number of concentrators triple over the past decade. Applied scientists and engineers at the School are engaged in research ranging from wearable robotics to an implantable cancer vaccine to the 3-D printing of tissues and novel bio-inspired materials. Several SEAS faculty are collaborators with researchers at the Wyss Institute for Biologically Inspired Engineering at Harvard, which will also occupy lab space in the SEC.

“Receiving this approval for the Science and Engineering Complex represents an exciting milestone for Harvard and for SEAS,” said Dean Francis J. Doyle III of the Harvard Paulson School. “We are one step closer to the day when our faculty, students, and researchers will occupy one of the world’s most advanced academic science and engineering facilities. We look forward to SEAS becoming an important anchor to the region’s newest cluster of innovation and discovery.”

SEAS’ presence in Allston marks the introduction of a new and exciting academic component to the campus. Harvard is in the middle of implementing nine projects included in the 2013 approved Institutional Master Plan. Recent milestones include the opening of the Continuum residential and retail building in Barry’s Corner; the recently approved Harvard Life Lab creating an innovation cluster with the successful i-lab next door; the new Harvard Ed Portal; and the demolition of the old Charlesview Apartments to make way for new roadways, green space, and, eventually, the envisioned Gateway building across from Continuum. The approval for the SEC comes two weeks after Harvard announced the new head of Enterprise Real Estate charged with leading Harvard’s conceptualization and implementation of the enterprise research campus.

“As our Allston campus grows, we have made significant progress in neighborhood activation, retail and housing, and greening efforts,” said Harvard University Executive Vice President Katie Lapp. “Now, with meaningful milestones like the Science and Engineering Complex approval, as well as future planning for the enterprise research campus, Harvard looks forward to continuing its commitment to the neighborhood while creating a new hub for regional research and innovation.”

With close proximity to Harvard Business School, the i-lab cluster, and the enterprise research campus, the SEC will foster cross-disciplinary innovation across the University. 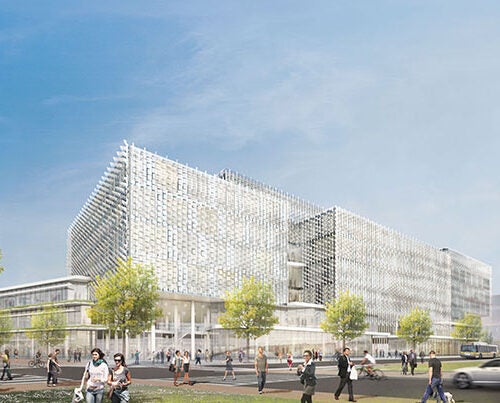 “The space to be developed in Allston represents a tremendous opportunity for the University’s academic evolution. The Science and Engineering Complex manifests, in physical form, how Allston can support that evolution,” said Harvard University Provost Alan Garber. “It will be a site of promising collaboration — as we know from collaborations between SEAS and the Business School that have already been catalyzed by planning for the complex. Subsequent phases of academic development in Allston will build upon and add to these growing connections, ensuring that the University’s presence in Allston will be dynamic, intellectually vibrant, and productive.”

The six-story facility, designed by the Boston office of Behnisch Architekten, a renowned architecture firm known for designing sustainable, innovative research buildings, will consist of nearly 500,000 square feet and include 70,000 square feet of public green space. The glassy ground floor will open into a large interior atrium, and the upper floors will be wrapped with a performative façade engineered to capture natural light and increase heating and cooling efficiency in all seasons.

“Our firm is delighted to move forward with the University’s Science and Engineering Complex,” said Robert Matthew Noblett, partner at Behnisch Architekten. “From engineering’s decisive influence on the discovery and resolution of some of the world’s most intractable problems, to the critical importance of cross-disciplinary efforts to achieve major research initiatives, to demonstrating genuine leadership in sustainable design and urban development — the SEC’s design pulls together a number of threads of contemporary life that are certain to impact coming generations.”

The approval follows a series of regulatory and community meetings throughout 2015.

“We are grateful to the many members of the Allston community who have actively participated in the public process surrounding the approvals,” said Faust. “I thank the members of the Harvard Allston Task Force, the local legislative delegation, and our Allston friends and neighbors who devoted their time to attending public meetings, paying careful attention to details, and providing thoughtful comments that challenged and shaped our thinking. The plans and projects we advance together are inevitably improved by this type of constructive and ongoing engagement.”

First approved in 2007 as the home of the Stem Cell Institute and paused in 2010 in response to the worldwide economic crisis, the SEC is a centerpiece providing context for Harvard’s ambitious 10-year Institutional Master Plan for Allston. The unfolding of Harvard’s physical development is occurring as the University is in the process of implementing a $43 million Master Plan for Community Benefits for the North Allston/North Brighton community. The Harvard Ed Portal, opened in February 2015, has emerged as a nexus for community members of all ages and Harvard students, faculty, and staff. Other benefit programs range from public realm improvements, partnership grants supporting local nonprofits, workforce and economic development programs, and a pilot housing stabilization initiative.

Work on the Science and Engineering Complex — which will yield jobs for 800 construction workers throughout the build-out — is scheduled to begin this summer. The facility is expected to be completed in time for the 2020-2021 academic year.

The University also received approvals from the BRA to begin the Soldiers Field Park graduate housing renovation project, a phased renewal of the existing four-building housing complex over four years. The apartments will be renovated and modernized, and the ground levels will be reprogrammed to expand amenities and engage pedestrians.