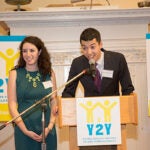 Harvard University took the first formal step toward Boston’s approval of its new Science and Engineering Center in Allston yesterday by filing its Institutional Master Plan Notification Form (IMPNF) with the Boston Redevelopment Authority (BRA). This submission kicks off a formal regulatory review of the project, which includes a 30-day public comment period.

The complex, which will house the John A. Paulson School of Engineering and Applied Sciences (SEAS), will be among the most cutting-edge teaching and research facilities in the country, officials said, and will play an integral role in the evolution of Harvard’s campus in the decades to come.

“The Science and Engineering Complex filing is a significant milestone for the University,” said Katie Lapp, executive vice president of Harvard. “This marks another exciting step forward in enhancing Harvard’s campus and activating Barry’s Corner in Allston.”

The 497,000-square-foot project, fronting on Western Avenue, will include teaching and classroom space, research areas, retail space, a spacious atrium and cafeteria, and landscaped open space.

“The expansion to Allston will not only provide SEAS with much-needed space, but new kinds of space for teaching, active learning, and cutting-edge research,” said Dean Francis J. Doyle III of the Harvard Paulson School. “In addition to state-of-the-art facilities, we look forward to the prospect of creative collisions that our faculty and students will have with colleagues from the Business School and eventually other Harvard units that will be part of the University’s Allston campus. The building will be a boon for SEAS and for the broader Harvard College community.”

“The design of the Science and Engineering Complex project pulls together a number of threads of contemporary life certain to influence coming generations: the engineering enterprise as a decisive influence in the discovery and resolution of some of the world’s most intractable problems; cross-disciplinary efforts as critical to major research initiatives; and genuine leadership in the area of sustainable design and urban development,” said Matt Noblett, partner at Behnisch Architekten.

The Science and Engineering Complex is moving forward as part of a series of carefully sequenced development projects intended to activate Barry’s Corner with a blend of academic, residential, and retail buildings. Over the course of the past six months, Continuum, a mixed-use retail and housing development, opened in Barry’s Corner, and the former Charlesview apartments were demolished. The Harvard Ed Portal and the ceramics studio are both open and thriving. The i-lab and Launch Lab are attracting students and startups, and the Business School is moving forward on plans for Klarman Hall.

Harvard continues to engage in planning related to the Gateway building on Western Avenue, which will eventually house a mix of academic and administrative offices. The University is currently exploring both the academic programming for and the specific timing of the construction of the building.

Simultaneously, the environmental remediation of Beacon Park Yard North by CSX continues. This work is a condition of the eventual transfer of the property to Harvard and marks a key step in making the land available for the planning of the University’s future Enterprise Research Campus.

Collectively, this sequence emerged as a revised strategy in 2011, necessitated by the economic realities in the post-recession economy. Projects anticipated over the next decade are outlined in Harvard’s Institutional Master Plan (IMP), which was given the community’s blessing and officially approved by the BRA in 2013.

As the Science and Engineering Complex proceeds through regulatory review, a robust community process will continue.

“Harvard has a valued and longtime partnership with the Allston neighborhood and the city of Boston. The implementation of the Institutional Master Plan is unfolding, and has been strengthened by community input and support,” said Kevin Casey, associate vice president of public affairs and communications at Harvard. “We’ve been pleased with how the public process has evolved in the pre-filing meetings throughout the fall and look forward to continued conversations in the next phases.”

“We’re pleased to see Harvard University move forward with plans for the Science and Engineering Complex in Allston, as this is an important step in the continued revitalization of the area around Barry’s Corner,” said Boston Mayor Martin J. Walsh. “Harvard has the opportunity to build on the momentum of other successful projects in the neighborhood, and we’re eager to continue facilitating a dialogue between the University and members of the community during the review process.”

The University hopes to commence construction on the Science and Engineering Complex next summer, with an anticipated building opening in 2020. A total of 800 construction jobs are expected over the course of the project.